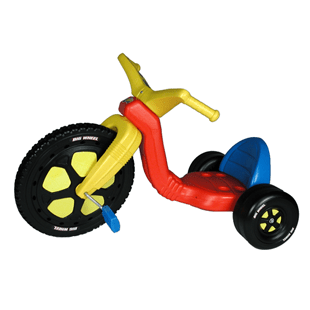 In the 1960s, designers at Louis Marx & Co., took apart a tricycle, mixed up the parts, and reassembled them into an upside down trike that handled like a race car. The new kind of trike owed its novelty and high performance to its design. On old steel tricycles, the rider perched on a seat above the drive wheel—and pitched over on sharp turns. And traditional tricycles did not have much speed. But the Big Wheel rode only a few inches off the pavement, allowing high-speed skid-outs on slanted or uneven surfaces. Molded plastic construction cushioned the jolts. Kids on Big Wheels sought out bumps, corners, and pavements where they could pick up speed. Even older children thrilled at the g-forces. The Big Wheel also gave them mobility along with a measure of independence.

The Big Wheel’s popularity outlived the company that first introduced it. When Marx went out of business in 1985, Carolina Enterprises, known later as Enterprise Industries, produced the Big Wheel for a second generation of mobile American kids. Coleco offered a similar vehicle, as did Playskool, Gearbox Toys, General Foam Plastics, and Razor USA. Today, the Big Wheel has been revitalized by Alpha International, Inc. of Cedar Rapids, Iowa, to carry new generations of kids on sidewalk adventures. 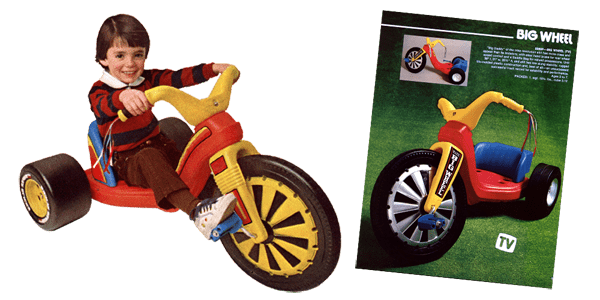 Factoyd: Inventor Ray Lohr created his first version of the Big Wheel from tricycle parts that he re-assembled upside down