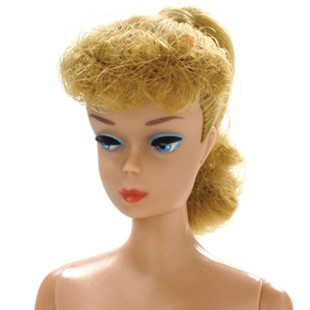 Watching her daughter Barbara play with paper dolls, Ruth Handler (cofounder of Mattel, Inc.) decided that girls would have more fun with three-dimensional dolls. Baby dolls filled store shelves in the 1950s, but Handler created a grown-up doll with a stunning wardrobe. Thus, welcome Barbie, the teenage fashion model. Within a year of her introduction in 1959, Barbie became the biggest selling fashion doll of all time. Sales surged with each annual addition of Barbie dolls decked out in the latest styles. Barbie generated criticism too. Feminists charged that her curves set unrealistic standards for physical beauty and her emphasis on fashion set girls’ sights on limited options. But the criticisms also brought innovations. Her manufacturer developed a commitment to boosting girls’ self-esteem and gave Barbie a cosmopolitan sense and expanded career options. African American and Hispanic American Barbies appeared in 1980, an Eskimo Barbie in 1982, a Hawaiian Barbie in 1983, and a Chinese Barbie in 1993. Over the years, Barbie changed jobs more than 75 times, becoming a dentist, a paleontologist, an Air Force fighter pilot, a World Cup soccer competitor, a firefighter, and a candidate for President. Even in demanding positions, though, Barbie retained her fashion sense.

Factoyd: Ninety percent of American girls own at least one Barbie doll, and the average girl owns 10!