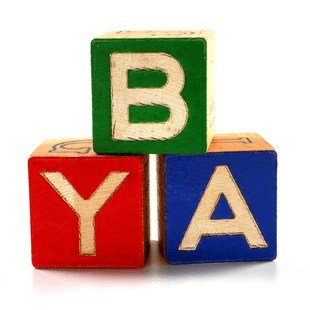 For centuries, parents understanding the connection between play and development have made alphabet blocks standard equipment of the well-stocked toy box. Alphabet blocks appeared as early as 1693, when philosopher John Locke pointed out that “dice and play-things, with the letters on them to teach children the alphabet by playing” would make learning to read a more enjoyable experience. A century and a quarter later, Friedrich Wilhelm August Froebel, a museum curator who pioneered kindergarten, introduced geometric solids carved from wood. Known as Froebel’s “gifts,” they soon led to alphabet blocks. In 19th century America, these toys found their way into most schools, marketed as tools to help children recognize shapes of letters before learning to read. Nowadays, virtually all American preschools and many home playrooms store alphabet blocks. Traditionally, homemade blocks prevailed. Currently, Uncle Goose Toys and Old Fashioned Blocks produce and manufacture this vividly colored toy. Parents may understand that these blocks carry educational value, but children like them because their colors delight the eye, their pictures provoke stories, and their numbers, patterns, and symbols look nice piled up.

Factoyd: Architect Frank Lloyd Wright credited his interest in buildings to the alphabet blocks his mother gave him as a child