ROCHESTER, New York—Which video games will make it into the World Video Game Hall of Fame this May? Can FIFA International Soccer outscore the competition? Will Call of Duty battle its way to victory? Can Microsoft Flight Simulator zoom across the finish line? Is Mattel Football a guaranteed touch down? 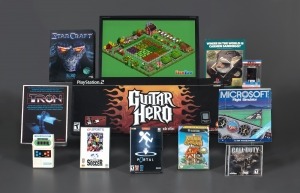 These 12 World Video Game Hall of Fame finalists—from true classics like the handheld Mattel Football or much newer browser and mobile games like FarmVille—have all been culturally influential and impacted the video game industry,” says Jon-Paul C. Dyson, director of The Strong’s International Center for the History of Electronic Games. “Whether it’s the white-knuckle fun of the racing classic Pole Position, the more cerebral gameplay of the puzzler Portal, or the rocking good times of Guitar Hero, these finalists embody what it means to be a good game.”

The World Video Game Hall of Fame received thousands of nominations for consideration for the 2021 class. Fans may vote for their favorite finalists from March 18 to March 25 as part of a “Player’s Choice” ballot at worldvideogamehalloffame.org. The three games that receive the most public votes will form one ballot and will join the other ballots submitted by members of the International Selection Advisory Committee, which is made up of journalists and scholars familiar with the history of video games and their role in society. (The public, collectively, will have the weight of one judge.) The final inductees will be announced in a virtual ceremony by The Strong museum on Thursday, May 6, at 10:30 a.m.

The World Video Game Hall of Fame recognizes electronic games that meet the following criteria: icon-status, the game is widely recognized and remembered; longevity, the game is more than a passing fad and has enjoyed popularity over time; geographical reach, the game meets the above criteria across international boundaries; and influence, the game has exerted significant influence on the design and development of other games, on other forms of entertainment, or on popular culture and society in general.

Anyone can nominate a game to the World Video Game Hall of Fame and view past inductees at worldvideogamehallofame.org.

The World Video Game Hall of Fame at The Strong recognizes individual electronic games of all types—arcade, console, computer, handheld, and mobile—that have enjoyed popularity over a sustained period and have exerted influence on the video game industry or on popular culture and society in general.

About The Strong
is a highly interactive, collections-based museum devoted to the history and exploration of play. It is one of the largest history museums in the United States and one of the leading museums serving families. The Strong houses the world’s largest and most comprehensive collection of historical materials related to play and is home to the International Center for the History of Electronic Games, the National Toy Hall of Fame, the World Video Game Hall of Fame, the Brian Sutton-Smith Library and Archives of Play, the Woodbury School, and the American Journal of Play. Together, these enable a multifaceted array of research, exhibition, and other interpretive and educational activities that serve a diverse audience of adults, families, children, students, teachers, scholars, collectors, and others around the globe.