ROCHESTER, New York—The games in the 2020 class of The Strong’s World Video Game Hall of Fame won their place in the esteemed hall by challenging players to solve puzzles, battle giant insects, complete epic quests, and build fantastic structures. Bejeweled, Centipede, King’s Quest, and Minecraft have been inducted into the World Video Game Hall of Fame and emerged from a field of 12 finalists that also included Frogger, Goldeneye 007, Guitar Hero, NBA Jam, Nokia Snake, Super Smash Bros. Melee, Uncharted 2, and Where in the World is Carmen Sandiego? The four inductees span multiple decades, countries of origin, and gaming platforms, but all have significantly affected the video game industry, popular culture, or society in general: 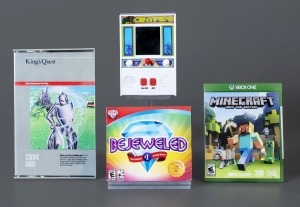 About Bejeweled: Initially created as a web-based Flash game in 2001, Bejeweled popularized the “match three” puzzle game and became one of the most iconic mobile games in history. It inspired many other mobile games using the same mechanics, and the game’s developer estimated in 2013 that it had been downloaded more than 500 million times. In 2008, Entertainment Weekly called Bejeweled “the Gone with the Wind of the casual-game world—the most commercially successful and influential puzzle program in the genre’s short history.”

“Players from around the world have devoted tens of billions of hours to playing Bejeweled and the games that it inspired,” says Curator Shannon Symonds. “Now, Bejeweled and its successor puzzle games seem commonplace—a regular part of all our lives—and it’s that reach, influence, and icon status that make Bejeweled so deserving of being the very first mobile game added to the World Video Game Hall of Fame.”

About Centipede: When it debuted in 1981, Atari’s Centipede challenged players to blast an insect as it zigzagged across the screen in challenging patterns and at various speeds. Ed Logg led a team that included Dona Bailey, one of the only female programmers in the 1980s arcade video game industry, to develop a game that helped attract more female players. It was an immediate success and became synonymous with the golden age of the arcade, though it also found later life in re-releases on home consoles, portable game systems, mobile game apps, and even as a board game. It also spawned multiple clones—from Bug Attack to War of the Bugs—and a sequel, Millipede.

“Centipede appeals to a wide demographic and is often cited as a game that helped attract more women to the arcade in the early 1980s,” says Jeremy Saucier, assistant vice president for electronic games and interpretation. “But it’s also one of the best-selling arcade games of that era and its fast-paced, bug-blasting gameplay is as challenging and satisfying to play today as it was decades ago.”

About King’s Quest: Designed by Sierra On-Line cofounder Roberta Williams, King’s Quest (1984) introduced players to the fantastical world of Daventry. The fairytale setting, unique visuals, and irreverent humor helped to make the game a hit on personal computers and popularized the graphic adventure genre. Sierra On-Line, led by Ken and Roberta Williams, produced seven sequels, and the game influenced dozens of adventure games that followed, establishing Roberta Williams as one of the most significant game designers of the 1980s and 1990s.

“It’s difficult to overstate King’s Quest’s influence on adventure games. More than any other game of its type, King’s Quest established or reinforced many of the conventions of the adventure games that followed it,” says Archivist Julia Novakovic. “Many games still today can trace their lineage back to King’s Quest.”

About Minecraft: With its endless play possibilities, Minecraft has become a global phenomenon since its introduction in 2009. Players in a worldwide, online community make their own creations using sets of pixilated blocks that they mine and use to build elaborate structures. The game offers nearly unlimited opportunities for creativity. As of 2019, the game had sold more than 176 million copies across all platforms, with more copies sold for consoles than for personal computers.

Says Digital Games Curator Andrew Borman, “The success of Minecraft speaks to the maturing of video games as a cultural touchstone. No longer do game creators need to be obsessed about having the most realistic looking graphics. Minecraft features a retro simplicity that hearkens back to fondly remembered days of 8-bit computers. Minecraft came of age at a time when indie gaming had emerged to give individual developers a greater say in the games they developed, and no game is a better representative of this movement than this bestselling hit creation.”

The World Video Game Hall of Fame at The Strong was established in 2015 to recognize individual electronic games of all types—arcade, console, computer, handheld, and mobile—that have enjoyed popularity over a sustained period and have exerted influence on the video game industry or on popular culture and society in general.  Inductees were announced at The Strong museum in Rochester, New York, on June 4, 2020 and are on permanent view on the museum’s second floor. Anyone may nominate a game to the World Video Game Hall of Fame. Final selections are made on the advice of journalists, scholars, and other individuals familiar with the history of video games and their role in society.