ROCHESTER, New York—Come on down! Is that your final answer? Survey says… Game shows have been broadcast in the U.S. for nearly 100 years. From the earliest panel shows and quiz scandals, to the games and puzzles of the 1970s, to the big money network series and the classic games now in primetime, the new National Archives of Game Show History will tell the ongoing story of one of television’s most popular genres. Located at The Strong National Museum of Play, one of the largest history museums in the United States, the archives are co-founded by veteran television producers Howard Blumenthal (Where in the World is Carmen Sandiego?) and Bob Boden (Funny You Should Ask).

“I’ve often said that game shows, like jazz and comic books, are one of the great American art forms,” said Ken Jennings, the winner of the Jeopardy! Greatest of All Time tournament and a recent guest host, “but they have always been considered by many to be a disposable genre. I am delighted by this new effort to take game shows seriously and to archive and preserve their history. I grew up watching game shows as a daily ritual. They’ve shaped who I am as a person, as well as our cultural landscape.” 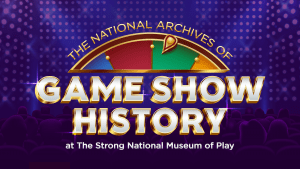 The National Archives of Game Show History will focus on acquiring the records and materials of the many professional producers, performers, directors, designers, writers, executives, and staff members who have been involved in all facets of game show development, production, marketing, and distribution. The materials they provide—scripts, set designs, props, technical plans, marketing materials, creative plans, production plans, and more—will form the heart of the new archives.

“Game shows are a part of American popular culture,” said Christopher Bensch, vice president for collections at The Strong. “Game shows are also a form of play for both the participant and viewer, reaching hundreds of millions of viewers. It’s only natural that the museum at the forefront of preserving play history takes on the challenge of preserving the history of television game shows.”

Through the National Archives of Game Show History, The Strong will also produce video interviews with some of the important creators, producers, hosts, and iconic contestants. This new collection will allow the museum to tell the full and personal stories of the industry. Said Wink Martindale, legendary host of Gambit, High Rollers, and Tic Tac Dough, “It is wonderful to hear about the National Archives of Game Show History stepping up to capture and preserve the legacy of game shows. Without this initiative, many primary resources relating to these shows, as well as oral histories of their creators and talent, risked being lost forever. I am very excited to see this launch and grow to become the primary destination for game show information in the country.”

The Strong plans to feature archived materials in future displays at the museum and traveling exhibitions. To donate materials to the project, contact Christopher Bensch, vice president for collections, at cbensch@museumofplay.orgcreate new email.

The Strong is the only collections-based museum in the world devoted solely to the history and exploration of play. It is home to the International Center for the History of Electronic Games, the National Toy Hall of Fame, the World Video Game Hall of Fame, the Brian Sutton-Smith Library and Archives of Play, the Woodbury School, and the American Journal of Play and houses the world’s largest and most comprehensive collection of historical materials related to play.

Howard Blumenthal is best-known for the PBS series, Where in the World Is Carmen Sandiego?, the first television game show to win a Peabody Award. He has also been associated with game shows for cable networks including MTV (Remote Control), Food Network (Taste Test), Nickelodeon (Double Dare), and other networks including Cinemax, Lifetime, and TV Land. Growing up in the business (his father produced NBC’s top-rated game show, Concentration), Howard’s first original production was How Do You Like Your Eggs? starring Bill Cullen; produced for Warner/QUBE, it was the first interactive game show. (Full bio attached in this press kit.)