ROCHESTER, New York—The Strong is pleased to announce that ESL Federal Credit Union has acquired the naming rights to Digital Worlds—a 24,000 square foot gallery dedicated to the history of electronic games and changing technologies—that will be part of a 90,000 square foot new museum wing, phase two in the museum’s larger Neighborhood of Play project. ESL has committed $1.5 million to the project as part of the $60-million Powered by Play: A Campaign for The Strong and will retain the exhibit naming rights for 25 years. 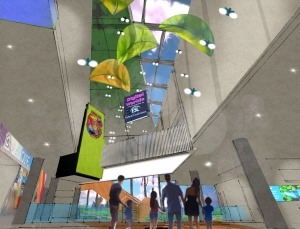 “After the COVID-19 pandemic ends, The Strong’s expansion project will be a major draw for people from all over the world and a catalyst for rebuilding the Rochester tourism economy,” says Steve Dubnik, president and CEO of The Strong. “ESL Federal Credit Union has long been a neighbor, generous supporter, and partner of The Strong, and we appreciate their ongoing support of community projects like this to help build Rochester’s future.”

ESL Federal Credit Union Digital Worlds will house two exhibits—High Score and Level Up—and be the centerpiece of the museum’s new, transformational wing. Through the gallery space, The Strong will explore and share the history of video games and emerging technologies as they relate to culture and the evolution of play. The new space will also include a new home for The Strong’s World Video Game Hall of Fame, which the museum launched in 2015. Materials from The Strong’s Women in Games initiative—which documents the important, but often obscured, roles women have played in gaming and tech—will be integrated throughout Digital Worlds. Digital Worlds will also spotlight the contributions of Black creators and other POC, like Jerry Lawson, who led the development of the first commercial, cartridge-based video game console and contributions from the LGBTQIA community.

“It’s an honor for ESL to support our wonderful neighbors and be a part of this transformational expansion at The Strong,” says Faheem Masood, president and CEO, ESL Federal Credit Union. “Through our commitment to the Digital Worlds gallery, we not only wish to uphold The Strong’s mission of learning, creativity and discovery, but also to celebrate the organization’s vital investments that will enrich the quality of life in Rochester and serve as a beacon for downtown development.

The Strong completed the first phase of the expansion project, a nearly 1,000 car parking garage, in 2020 and is slated to break ground on the next phase of the project, which will eventually include ESL Federal Credit Union Digital World, later this spring. The entire project, estimated to draw an additional 400,000 people to the museum annually by 2026, is scheduled to be completed iby the summer of 2023.

The Strong is the only collections-based museum in the world devoted solely to the history and exploration of play. It is home to the International Center for the History of Electronic Games, the National Toy Hall of Fame, the World Video Game Hall of Fame, the Brian Sutton-Smith Library and Archives of Play, the Woodbury School, and the American Journal of Play and houses the world’s largest and most comprehensive collection of historical materials related to play.

The Rochester-based financial institution employs more than 870 people in the Greater Rochester area and holds more than $8.2 billion in assets. Since 1996, ESL has paid out 26 consecutive Owners’ Dividends to its members totaling more than $185 million. Since the creation of its Community Impact initiative in 2018, ESL has reinvested more than $40 million in grants throughout the community. The company has appeared on the Great Place to Work Best Small & Medium Workplaces list for 10 years since 2010. ESL Federal Credit Union is headquartered at 225 Chestnut Street, in Rochester, and can be found online at www.esl.org.