Game shows have existed for nearly as long as broadcasting itself. In 1923, a daily newspaper, The Brooklyn Daily Eagle, struck on the idea with a radio show, Brooklyn Eagle Quiz on Current Events. Since then, game shows have endured changes in the media landscape, scandals, Supreme Court hearings, and numerous premature pronouncements of death for the genre. And here we are, nearly a century later, still tuning in, and still playing. 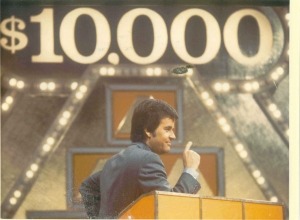 In the early stages, shows like Professor Quiz and Ask-It Basket simply asked audience members questions and gave the high scorer $25. Quiz Kids and Information Please asked listeners to mail questions in for panelists to answer, with a few dollars awarded for people whose questions were stumpers. It was forward-thinking producer/host Ralph Edwards who took game shows to the next level with his raucous Truth or Consequences in the late 1930s. It only made sense that when commercial television in the U.S. began on July 1, 1941, the programming line-up for the day included a special broadcast of this show.

After World War II, Break the Bank, Stop the Music, and Hit the Jackpot offered contestants a fortune in cash and prizes, which sparked the proliferation of big prize giveaways. The FCC attempted to outlaw the entire genre, believing game shows to be illegal lotteries. But game shows remained on the air during the court battles, and producers kept innovating. A former announcer, Mark Goodson, and a former comedy writer, Bill Todman, collaborated on a new show called Winner Take All that introduced new features that remain in game shows to this day, including “returning champions” and “buzzing in.” It also launched the career of host Bill Cullen, who would go on to host 40 more game shows during his storied, record-setting career. Cash and Carry, hosted by Dennis James, was the first regularly scheduled network game show, debuting in 1946. In 1954, the FCC’s battle to sink the game show business reached the Supreme Court, which ruled that game shows were not illegal lotteries and couldn’t be outlawed.

The following summer, CBS unleashed The $64,000 Question, the biggest quiz the world had ever seen, which led to the $25,000 Golden Medley Marathon on Name That Tune, as well as The $100,000 Big Surprise, Break the $250,000 Bank, Tic Tac Dough, Dotto, and Twenty One. But all of those shows were hiding the same dirty secret: the fix was in. Contestants were coached, and answers were predetermined. When embittered former contestants came forward with concrete proof of what was happening behind the scenes, the big money quiz show collapsed, laws were enacted to prevent rigging of quiz shows, and many careers were destroyed.

The genre bounced back in the 1960s, with innovative producers like Monty Hall, Stefan Hatos, Merv Griffin, Bob Stewart, Merrill Heatter, Bob Quigley, and Chuck Barris introducing fun new games that boasted low paydays but high amounts of fun. Games like Concentration, Password, Video Village, Let’s Make a Deal, The Hollywood Squares, The Newlywed Game, The Dating Game, and even the original Jeopardy! offered modest prizes and cash payoffs of only hundreds of dollars, but drew big audiences anyway, purely because the shows were fun. The hosts of this era become some of the most enduring icons, with fans today still smiling and nodding in recognition at the mention of names like Allen Ludden, Peter Marshall, Bob Eubanks, Jack Narz, Tom Kennedy, and Jim Lange. 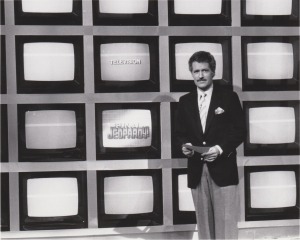 gain, too. The opposition followed suit, and the 1970s and 1980s spawned some of the genre’s all-time favorites as a result. Game shows blossomed in the 1970s—at one point in the decade, the three major broadcast networks had a total of 19 game shows on the air. An abundance of syndicated offerings at the same time meant that in some cities, it was possible to have the TV on continuously from 9:00 a.m. to 8:00 p.m. and, by switching the channel at the right times, see nothing but game shows. This was the era that gave us Wheel of Fortune with Chuck Woolery and Susan Stafford and Family Feud starring Richard Dawson. Social changes in America were reflected in the casting of hosts. Adam Wade became TV’s first Black game show host with Musical Chairs. Betty White hosted Just Men! and took home an Emmy for Outstanding Game Show Host—the first woman ever to win in the category. In 1983, Wheel of Fortune with new hosts Pat Sajak and Vanna White introduced a nighttime version that became the biggest hit in syndication history. The following season, a new version of Jeopardy! hosted by Alex Trebek was paired with Wheel in most markets, forming a formidable hour that endures to this day.

Cable television, which arrived in the 1980s, sought out niche audiences, so networks and producers developed a slew of new games that zeroed in on their viewers. TNN reached out to country music lovers with Fandango. College kids were drawn to MTV by the hip and raucous Remote Control, but their younger siblings were the greatest beneficiaries, with Nickelodeon bringing them slime-filled Double Dare, Finders Keepers, Make the Grade, Get the Picture, Nick Arcade, and Legends of the Hidden Temple. Although the early 1990s are often thought of as a dry spell for the genre—of the slate of new game shows for adults that were introduced in 1990, nine didn’t live to see the fall of 1991—the same period is remembered by the children of that era as a golden age for games. Even PBS got into kids’ games, with the beloved Where in the World is Carmen Sandiego? And it’s a good thing too, because aside from The Price is Right, game shows were gone from network television altogether by 1994. Fortunately, that year ended with a life preserver for game show fans—Game Show Network launched on satellite television, unearthing thousands of hours of beloved game shows from the past that hadn’t been seen since their original broadcasts, along with a host of original games over the next decade, like Lingo, Russian Roulette, Friend or Foe, and Cram.

As the new century approached, game shows roared back to life with the astonishing overnight success of ABC’s Who Wants to be a Millionaire?, a British import. “Is that your final answer?” entered the American lexicon, and the doors of prime time television were wide open for game shows. During the next decade, an updated and un-rigged Twenty One, as well as Greed, The Weakest Link, 1 vs. 100, and Deal or No Deal would come and go, along with the onslaught of reality competition shows—Survivor, Big Brother, America’s Got Talent, The Bachelor/Bachelorette, and American Idol, by far the most prominent of the emergent subset.

New game show formats are constantly emerging, like Funny You Should Ask and 25 Words or Less. But recent years have illustrated that sometimes the old wines are the best—Wheel of Fortune 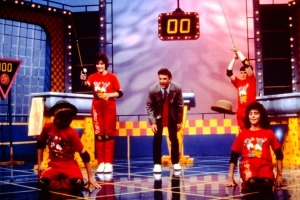 , Jeopardy!, and Family Feud still dominate syndicated television, while The Price is Right is still the king of the network daytime mountain. In prime time, reboots like Match Game, Press Your Luck, The $100,000 Pyramid, and To Tell the Truth are hits. A-listers who grew up with game shows are now hosting them. Classic formats including Wheel of Fortune and The Dating Game incorporated celebrities, and today’s series are hosted by the A-list names like Jamie Foxx, Alec Baldwin, Elizabeth Banks, Peyton Manning, Wayne Brady, and Drew Carey, not so far removed from a time when game shows hosted by Super Bowl champions and Oscar winners would have been unfathomable.  An over-the-air nostalgia channel, Buzzr, presents round-the-clock reruns of vintage games from the 20th century. The success of old favorites stands in stark contrast to the period of transition taking place in mass media. Behind us now are more than 1,000 game shows on television and radio. Ahead of us lie podcasts, streaming services, live game apps like HQ, and whatever other forums will bring us the game shows of the future.

In the words of many hosts past and present, “Thanks for playing!”