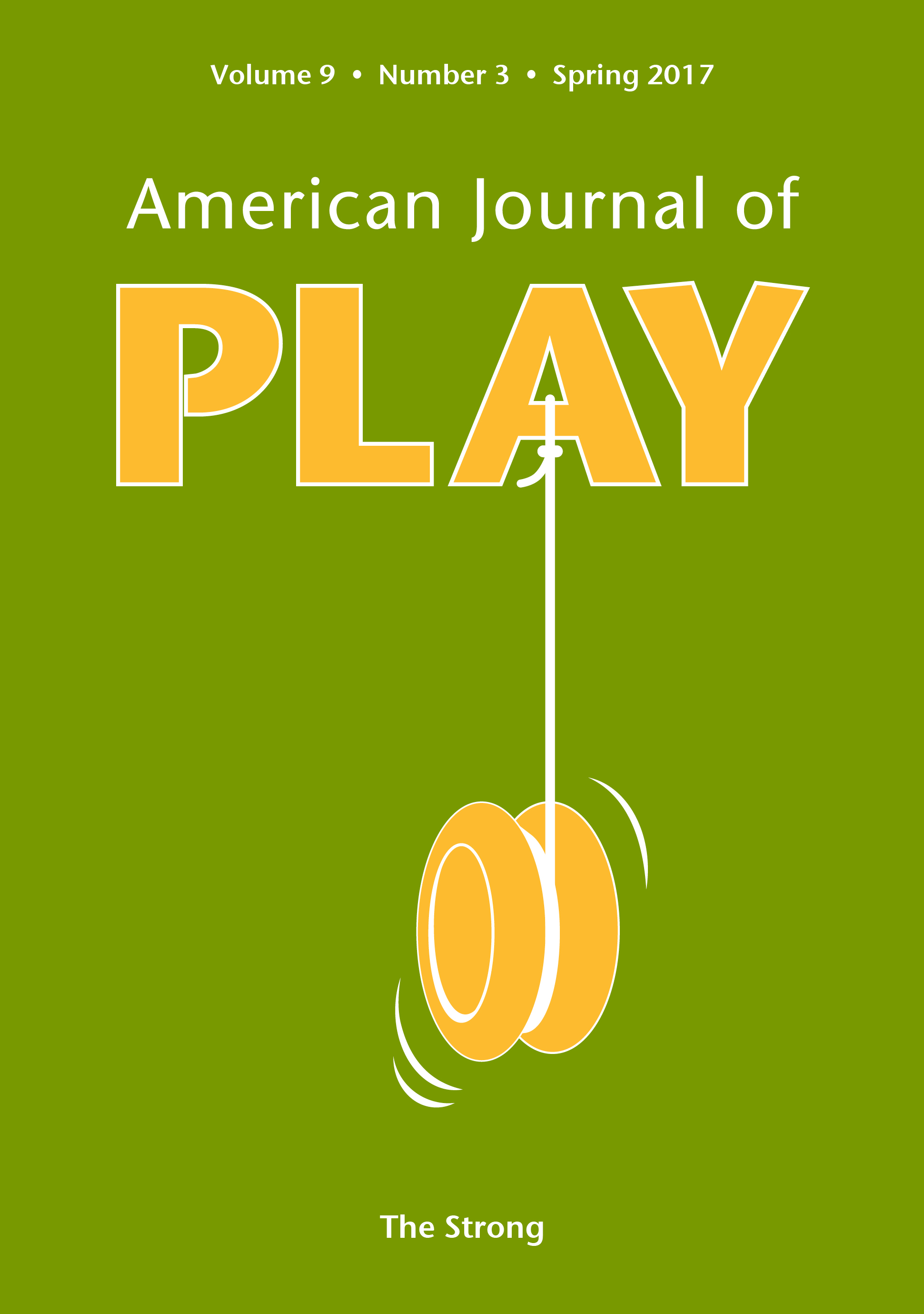 Welcome to the American Journal of Play special issue on play in the ancient world, another in the series of theme issues we publish from time to time. Each focuses on an important topic in the fast-developing study of play. Each is guest edited by a distinguished expert on the topic. And each includes work by the leading researchers and thinkers on the topic. For this issue, guest editor Thomas Banchich has assembled a series of articles exploring what we know about play in ancient Greece and Rome and how we come to know it. We begin with two interviews. The first discusses play in ancient Greece with Simon Goldhill, and the second play in ancient Rome with Garrett Fagen, and together they include such topics as theater and comic literature, philosophy and social wit, and what jokes, leisure pursuits, and laughter in the two ancient cultures reveal about them. Our guest editor himself considers how the Greeks perceived playfulness; Dion and Marion Sommer compare ancient and modern toys; and Stephen E. Kidd argues for the seriousness of playful ancient episodic novels as a genre. We have also included a complimentary piece written by medieval scholar Andrew Higl, who examines a tenth-century collection of riddles written in Old English, some of which derive from ancient Greek sources. Taking note of what about play has changed and what has remained the same, these interviews and articles offer insight into the historically contingent nature of play and how it illuminates both ancient sensibilities and our own.

Simon Goldhill is Professor of Greek at the University of Cambridge where he is a fellow of King’s College; he is also the John Harvard Professor of the Humanities and Social Sciences at Cambridge. He is the director of the University of Cambridge’s Centre for Research in the Arts, Social Sciences, and Humanities (CRASSH) and a fellow of the British Academy and the American Academy of Arts and Sciences. Best known to the public as a champion of the classics through interviews and lectures and in frequent appearances on television and radio, among scholars he is celebrated for his work on Greek tragedy. His Jerusalem: City of Longing won the Independent Publishers gold medal in History for 2009; his Victorian Culture and Classical Antiquity: Art, Opera, Fiction, and the Proclamation of Modernity won the 2012 Robert Lowry Patten Award for the best book on Victorian literature; and his Sophocles and the Language of Tragedy won the Runciman Award in 2013 for the best book on a Greek topic, ancient or modern. His many other books include Foucault’s Virginity: Ancient Erotic Fiction and the History of Sexuality; and Love, Sex, and Tragedy: How the Ancient World Shapes Our Lives. In this interview, Goldhill talks about play in ancient Greece—its importance in Greek theater and literature, philosophy and social wit, games and sports, jokes and sex, and love and family life. He both reflects upon how Greek sensibilities still flow through our contemporary hearts and considers how play helps distinguish between modern and ancient people. Key words: ancient play versus modern play; play in ancient Greece; theater as play; symposium as play; games and sport in ancient Greece; humor in ancient Greece; play in Greek literature; eroticism as play; violence in play

Garrett Fagan served as a professor of Ancient History at Pennsylvania State University and Andrew G. Mellon Professor-In-Charge at the Intercollegiate Center for Classical Studies in Rome. He taught at York University in Toronto and at the University of North Carolina at Chapel Hill, and he held a Killam Postdoctoral Fellowship at the University of British Columbia in Vancouver and an Alexander von Humboldt Research Fellowship at the University of Cologne, Germany. Born in Dublin, Fagan trained at Trinity College and later at McMaster University in Canada where he specialized in Roman history and archaeology. Fagan wrote Bathing in Public in the Roman World and The Lure of the Arena: Social Psychology and the Crowd at the Roman Games, and he coedited Archaeological Fantasies: How Pseudoar-chaeology Misrepresents the Past and Misleads the Public. His many scholarly articles include “Violence in Roman Social Relations” and “New Perspectives on Ancient Warfare.” Fagan developed three Great Courses for The Teaching Company that appear on disk and as a mobile app, and he has been featured in the PBS series Nova and on the History Channel for cable television. In this interview, Fagan ranges widely over Roman play—its toys, spectacles, contests, sports, games, comic literature, and jokes and the nature of Roman leisure and laughter. Key words: ancient play versus modern play; games and sport as play; humor in ancient Rome; play in ancient Rome; play in Roman literature; pseudoarchaelogy; theater as play; violence in play

A Gag at the Bottom of a Bowl?: Perceptions of Playfulness in Archaic and Classical Greeceopens PDF file

The author uses the inscriptions and images on several ancient Greek vases to consider how social context, the meanings of play-related words, and particular features of the Greek language contributed to the ability to signal and perceive playfulness. He emphasizes the importance of the lexical range of some Greek words and how expectations linked to specific social settings—
especially to the Greek symposium—could promote the perception of play. He maintains that the historical, cultural, and linguistic perspectives of the ancient Greeks warrant the attention of modern students of play. Key words: ancient Greece; lexical range; personification of play; playfulness; symposium

The authors note that ancient Athens, in important ways, connected children, toys, and play. But they also find the scholarship of toys sparse and scattered. They discuss obstacles that can skew our modern view of the Greek mind, and they caution that modern eyes should not see play where the Greeks saw ritual and religious devotion. With these challenges in mind, the authors draw from archaeological, linguistic, and literary evidence found in ancient toys, art, and texts to offer an ecology of play that fits both modern and antique societies and guides future investigations of the subject. Key words: ancient Athenian toys; archeology and childhood in ancient Athens; classical dolls; classical rattles; classical wheeled horses; geometric and classical periods

Play in and around the Ancient Novelopens PDF file

The author discusses the Exeter Book riddles, some of the earliest poems in English, specifically Old English, as perfect examples of how play and poetry intersect. Their playfulness, he claims, is most apparent in the original manuscript, but notes that few modern readers read Old English. The orthography of the manuscript also helps to make the play of the poems more obscure. Moreover, contemporary readers nearly always encounter the riddles in modern editions and with modern English translations, and editors and translators often provide the riddles with clear divisions and interpretive notes. They sometimes offer their own solutions to the riddles (although the actual manuscript provides no explanation for them). All of which leads to
a different and less playful experience for readers of the riddles. The author explores what it means to play the riddles in their original context, making the individual reader the riddle hero (hæleþ) whom the text calls on to construct playful worlds of imagination and language. He examines how the Old English riddles demand to be played and how they oscillate playfully
between the mundane, the sacred, and the obscene. Key words: Beowulf and play; Old English poetry; riddles and play in poetry

Thomas Banchich is Professor and chair of the Classics Department at Canisius College. He has taught and lectured extensively on the history of Greek and Roman cultures and written more than fifty articles, reviews, and book chapters on the value of ancient languages, art, literature, and philosophy. His publications include The Lost History of Peter the Patrician and The History of Zonaras: From Alexander Severus to the Death of Theodosius the Great. An award-winning professor, Banchich has published his work in A Companion to Greek and Roman Historiography and the Bryn Mawr Greek Commentaries series. He is also a cofounder of De Imperatoribus Romanis, an online encyclopedia of Roman rul-ers and their families.

Andrew Higl is Associate Professor at Winona State University where he also serves as the director of School of Graduate Studies in English. He specializes in medieval English literature, and his publications explore the textual history of Geoffrey Chaucer’s The Canterbury Tales. He is the author of Playing the Canterbury Tales: The Continuations and Additions and has written for numer-ous articles and book chapters that include the Journal of the Early Book Society; Essays in Medieval Studies; and Inhabited by Stories: Critical Essays on Tales Retold.

Stephen E. Kidd is Professor in the Classics Department at Brown University. His research investigates the comedic elements within Greek literature. He is the author of Nonsense and Meaning in Ancient Greek Comedy, and his forthcoming book, Paidia: The Concept of Play in Ancient Greek Thought, will examine the relationship between play and aesthetics among Greek classics. Kidd is arecipient of several teaching awards, and his writings on Greek philosophy have appeared in such publications as Classical Philologus, Philological, Transactions of the American Philological Association, and Greek & Roman Games in the Computer Age.

Dion Sommer is Professor in the Department of Psychology and Behavioural Sciences at Aarhus University in Denmark. His areas of interest include child development, child psychology, and the social constructions affecting the behaviors of children and families in late modernity. He has authored or coauthored Learning, Formation, and Development Qualifications for the Future of Day Care and School and Childhood Psychology: Young Children in Changing Times. His forty-some coauthored articles and book chapters have appeared in European Journal of Developmental Psychology; Intercultural Learning and Teaching in Early Years; the Journal of Reproductive and Infant Psychology and many other publications. Maria Sommer is doctoral student at the Institute for Archeology and Ancient Culture at Stockholm University in Sweden. Her work examines the role of play and toys in ancient Greek culture. She and Dion Sommers are the coauthors of Care, Socialization, and Play in Ancient Attica: A Developmental Childhood Archeological Approach.