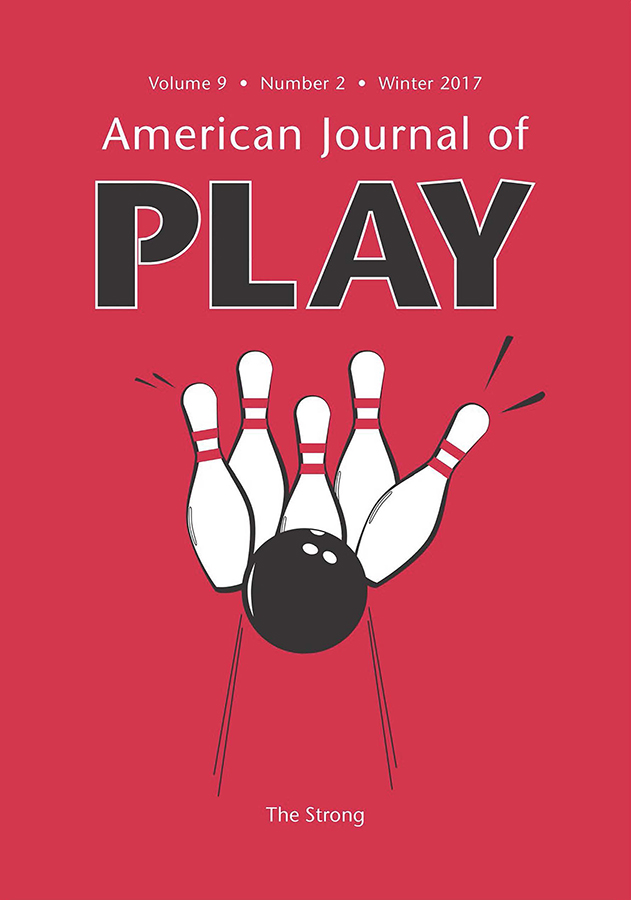 Welcome to the American Journal of Play special issue on the emerging discipline of interpersonal neurobiology. Special theme issues focus on important topics in the fast-developing study of play. Each features a guest editor, a distinguished expert in the topic; and each includes work by leading research-ers and thinkers in the field. Our guest editor, psychologist and play theorist Terry Marks-Tarlow, has assembled a series of articles offering a wide lens for examining play that includes work from such fields of study as neuro science, neurochemistry, evolutionary and developmental psychology, psychiatry, psychotherapy, ethology, aesthetics, and anthropology.

An interview with neuropsychologist Allan N. Schore, who has pioneered the fields of interpersonal neurobiology and regulation theory, opens the issue. An article follows by anthropologist and independent scholar Ellen Dissanayake, who investigates the evolutionary origin of the arts. Our guest editor herself contributes with a piece on deception and self-deception in a case of sexual abuse that recruited play-like fantasy. Clinical professor of psychiatry, Yakov Shapiro, along with co-authors Terry Marks-Tarlow and concert pianist and conductor Joseph Fridman, explore the parallels between musical improvisation and psychotherapy. Larry Vandervert investigates the behavioral, cognitive, and affective influences of the cerebellum in the evolution of play and culture. And sex-addiction therapist Alexandra Katehakis explores the dangers of confusing female rape fantasy with real sexual violence. Taken together, these articles examine how the unity of brain, mind, and body—the product of soothing and playful attachment and attunement—arises out of healthy relationships that nurture love, creativity, and play.

Playing on the Right Side of the Brain: An Interview with Allan N. Schore

Allan N. Schore has served on the clinical faculty of the Department of Psychiatry and Biobehavioral Sciences at UCLA’s David Geffen School of Medicine since 1996 and has maintained a private clinical practice for more than four decades. He has contributed significant research to the disciplines of interpersonal neurobiology, affective neuroscience, psychiatry, psy   cho-analysis, psychotherapy and clinical social work, and infant mental health and trauma theory. He is best known for his integration of neuroscience and attachment theory, his idea of attunement between mothers and infants, his investigation of right-brain regulation of emotion, and his applications of neuroscience in psychoanalysis and models of psychotherapy. Given the Scientific Award from the Division of Psychoanalysis of the American Psy-chological Association in 2008, he is a prolific writer whose works include The Science of the Art of Psychotherapy, Affect Regulation and the Origin of the Self, Affect Dysregulation and Disorders of the Self, and Affect Regulation and the Repair of the Self. In this interview, he discusses his scholarly and clinical career in neuroscience and neuropsychoanalysis and the breakthroughs in brain science that have changed our understanding of lived experience. Key words: affect regulation; attachment theory; neuroscience; mind, brain, and body; regulation theory; right brain

Ethology, Interpersonal Neurobiology, and Play: Insights into the Evolutionary Origin of the Arts

The author considers the biological basis of the arts in human evolution, which she holds to be grounded in ethology and interpersonal neurobi-ology. In the arts, she argues, ordinary reality becomes extraordinary by attention-getting, emotionally salient devices that also appear in ritualized animal behaviors, many kinds of play, and the playful interactions of human mothers with their infants. She hypothesizes that these interactions evolved in humans as a behavioral adaptation to a reduced gestation period, promot-ing emotional bonding between human mothers and their especially help-less infants. She notes that the secretion of opioids, including oxytocin, that accompany birth, lactation, and care giving in all mammals is amplified in human mothers by these devices, producing feelings of intimacy and trust that engender better child care. The same devices, exapted and acquired culturally as arts, she argues, became prominent features of group ritual ceremonies that reduced anxiety and unified participants, which also offered evolutionary advantages. Key words: artification; ethology; interpersonal neurobiology; mother-infant play; origins of the arts

I am an Avatar of Myself: Fantasy, Trauma, and Self-Deception

The author employs neurobiology to help explore deception in nature and self-deception in human beings. She examines activities that may appear playful but that lack such hallmark qualities of play as equality, mutual pleasure, and voluntarism and that can, therefore, prove psychologically destructive. She warns that the kind of playful interactions of parents and children that help connect the concept of self with the concept of other and to expand children’s imaginative horizons during healthy development may turn defensive and do harm during severe trauma. Such interactions can shrink mental horizons, help separate mind from body, and facilitate the disconnection of the self from others. These devastating outcomes occur especially when play-like activities seem to offer in fantasy a safety absent from real life. The author uses the clinical case of a victim of sexual abuse to illustrate such unhealthy activity and the compulsion and dissociation it creates, which can foster the epigenetic transmission of incest from one generation to the next. Key words: interpersonal neurobiology; fantasy; dis-sociation; self-deception; emotional regulation; epigenetics

Vygotsky Meets Neuroscience: The Cerebellum and the Rise of Culture through Play

The author suggests the brain’s cerebellum and cerebral cortex are the ori-gin of culture and considers the cerebellar models that came to constitute culture to be derived specifically from play. He summarizes recent research on the behavioral, cognitive, and affective evolution of the cerebellum and the cerebral cortex that shows the development of these processes created increased efficiencies, unconscious control of complex situations, the ability to predict probable future circumstances before they occur, error correction in emotional and social situations, and an unconscious blending of compo-nents to solve new problems. He argues that human play evolved from animal play, which helped train animals to deal with unexpected circumstances. As animal play evolved toward human play, rule-governed imagination allowed play to help predict events through sequence detection. Human play then led to the advent of culture, which socially amplified the advantages of these adaptations. The author contends that this creative blending of cerebellar models provides an explanation of Lev Vygotsky’s (1978) most compelling insights about play. He concludes that, although play and culture appear dramatically different, they develop from the same brain mechanisms. Key words: animal play; brain evolution; cerebellum; creativity; culture; play; socialization; Vygotsky; zone of proximal development

Listening beneath the Words: Parallel Processes in Music and Psychotherapy

The authors investigate the parallels between musical performance and psy-choanalytical therapy, using the former as a metaphor for the way therapist and patient jointly compose the therapeutic experience and better the treat-ment it offers. Key words: evolution; fractals; music; neuroscience; psycho-dynamic; psychotherapy

The author looks at the psychology of sexuality and its origins in the brain’s cortex. She discusses how the cues for desire sometimes overshadow mere physiological cues and how they may be healthy or unhealthy. She argues that understanding the intricate neurochemical and neurostructural work-ings of the mind and the central and autonomic nervous systems in both men and women—and their dependence on early attunement—helps thera-pists and patients distinguish sexual play from predatory, trauma-inducing sexual aggression and that this distinction is crucial given the centrality of the mammalian emotional circuit of play in our brain processes, including the sexual. She discusses the dangers of mistaking forcible rape fantasy for a real-life desire and examines other fantasies and the sexual role play that fuel our sexuality. She warns of the psychological and emotional damages of isolating, nonconsenual sex. And she  discusses how sexual play can provide emotional attunement, joy, and sociability to human life. Key words: sexual fantasy; sexual play; reward center

Russell Meares, The Poet’s Voice in the Making of Mind

Tamara R. Mose, The Playdate: Parents, Children, and the New Expectations of Play

Ellen Dissanayake is Affiliate Professor for the School of Music at the University of Washington. Her research investigates the aesthetics of art and examines the role it plays in the development of species and cultures around the world. Her publications include Art and Intimacy: How the Arts Began; Homo Aesthetics: Where Art Comes From and Why; and What Is Art For? She has also authored or coauthored more than a hundred book chapters and articles that have appeared in Darwin’s Bridge: Uniting the Sciences and Humanities; Art as Behavior: An Ethological Approach to Visual and Verbal Art, Music and Architecture; and Origins of Religion, Cognition and Culture, and other works.

Terry Marks-Tarlow is a clinical and consulting psychologist in Santa Monica, Cali-fornia, and a faculty member at the Insight Center in Los Angeles. She also serves as cochair on the board of directors for the Los Angeles Country Psychological Associa-tion Community Outreach and works as a research associate at the Institute for Fractal Research in Kassel, Germany. Her areas of interest include the application of neuro-biological and nonlinear science to psychotherapy, creative blocks, self-expression and deep transformation, and the clinical interface between yoga and psychotherapy. She has lectured extensively and contributed to numerous journals. Her books include, among others, Awakening Clinical Intuition: An Experimental Workbook; Clinical Intuition in Psychotherapy; Psyche’s Veil: Psychotherapy, Fractals and Complexity; and Creativity Inside Out: Learning through Multiple Intelligences.

Yakov Shapiro is Clinical Professor in the Department of Psychiatry at the University of Alberta in Edmonton, Canada. He also serves as the university’s psychotherapy super-visor and director of the Integrated Psychotherapy/Psychopharmacology Service. His research on psychobiology and its approach to treating trauma, mood, and personality disorders has been presented at national and international conferences and his writing has appeared in the Journal of Psychiatric Practice; Psychoanalytic Dialogues; Journal of Physiology; and Ethics & Behavior. Joseph Fridman is professor and opera director at Alberta Music Academy in Edmonton. A concert pianist, vocal coach, and piano teacher, he has held teaching appointments at the Schools of Music for Gifted Children in St. Petersburg, Russia, and Kiev, Ukraine, as well as the Pskov Music College.

Larry Vandervert is the owner of American Nonlinear Systems and a retired Fellow of the American Psychological Association. His areas of expertise include the neuro-sciences, psychology, creativity, innovation, giftedness, and science, and his research investigates the role of the cerebellum in learning and in the development of culture. He is the author or coauthor of more than fifty book chapters and articles appearimng in Child Prodigies in Music; The Routledge International Handbook of Innovation Edu-cation; International Handbook on Giftedness; The Journal of Mind and Behavior; and Cerebellum & Ataxias.