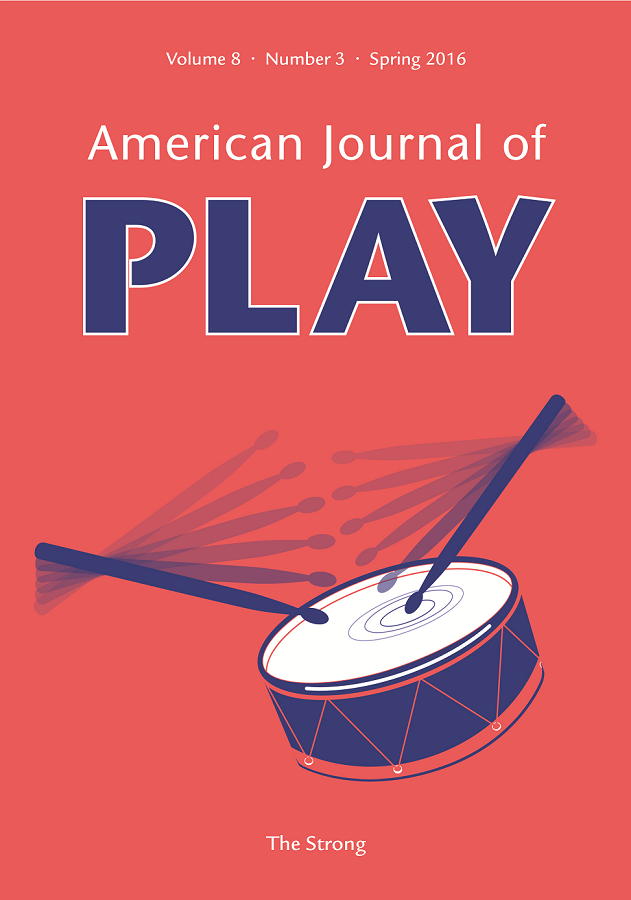 Reason and Rationalization: A Theory of Modern Playopens PDF file

The author reviews historical attempts—mostly by European thinkers—to characterize modernity and its relationship to play. He discusses ideas from Friederich Schiller to Brian Sutton-Smith, all to set the ground for a theory of play in the modern world. Emphasizing the ideas of Max Weber—in particular his theory of rationalization and its importance for expressive culture—the author explores the value of rationality to a theory of play. He defines play more broadly than as a pastime and learning aid for children or a rough-and-tumble developmental tool in the evolution of mammals. Instead, he bases it more squarely on his concept of “emotional destinations.” In the process, he looks at kinds of play not often considered in play studies, such as professional sports and official festivals, and finds play not just a ubiquitous biological phenomena but also an essential social activity. Key words: emotional destinations; Max Weber; modernity; play and the modern world; rationalization

Flow experiences (also known as optimal performance) occur when people engage in activities they enjoy. The authors discuss such events in their study that examined a number of healthy, active individuals (performing artists, athletes, and others engaged in a range of recreational activities) and divided these into three groups based on adverse childhood experiences. They found that, although flow is higher among the individuals who experienced more adversity in childhood, this same group also had more difficulty regulating emotions and more frequently employed emotion-oriented coping strategies under stress. They also discovered that, compared to the athletes and regularly active individuals, performing artists suffered significantly more adversity in childhood and engaged in more emotionaloriented coping strategies. All three groups, however, enjoyed high autotelic flow experiences, which—so the authors suggest—indicates that the subjects derived meaning from their preferred activities. Overall, the authors claim, their study’s findings reinforce the psychological benefits of flow-based experiences. Key words: adverse childhood experiences (ACE), coping strategies, dispositional flow, flow experiences and athletes, flow experiences and dancers, regulation of emotions

Although exposure to traumatic events runs high among Americans, only a few—about 8.7 percent—of those exposed to such events develop symptoms that warrant a diagnosis of Posttraumatic Stress Disorder (PTSD). The authors investigate two groups—dancers and athletes, including some who suffered from PTSD and some who did not—and found a higher frequency of PTSD diagnoses than would be expected in the general population and more so among the dancers than the athletes. Both groups indicated that the creative process was a positive experience, but the PTSD group reported more anxiety and emotional-oriented coping while creating and during stressful situations. The authors conclude that, although engaging in adult forms of play may not eliminate PTSD, participating in preferred physical activities may enhance the self-efficacy and self-management of those who do suffer from it. Participation in these activities certainly offers them pleasure and meaning. Key words: coping strategies, creativity, emotion regulation, overexcitability, play, Posttraumatic Stress Disorder (PTSD)

Play Ball?: Reflections on My Father’s Youth Baseball Experiences and Why They Matteropens PDF file

The author uses his father’s autobiographical writings about the small-town, baseball experiences of his youth as background for discussing the significant cultural shifts that have dramatically changed the nature of the game from a free-play experience for neighborhood kids to an organized youth-league sport. In contrast to his father’s day, the author claims that the playfulness of youth baseball has become nearly extinct. After a brief overview to define the essence of play, the author explains how his father’s kind of free, unstructured, deliberate play has been diminished by complex cultural and social shifts such as rationalization, suburban sprawl, and changing child-development philosophies. He concludes that the continual decline these forces have created in free play will not only significantly influence the future of baseball as a sport but also the quality of children’s growth, development, and health. Key words: changes in children’s free play; sandlot baseball; unstructured play; youth baseball

Dennis McCarthy, ed., Deep Play: Exploring the Use of Depth in Psychotherapy with Childrenopens PDF file

Brenda Biondo, Once Upon a Playground: A Celebration of Classic American Playgrounds, 1920–1975opens PDF file

Jamie Madigan, Getting Gamers: The Psychology of Video Games and Their Impact on the People Who Play Themopens PDF file

Thomas S. Henricks is the J. Earl Danieley Professor of Sociology and Distinguished University Professor at Elon University. He established the program for sociology majors and developed the Faculty Resource Center at Elon. He also served as dean of the social sciences department and associate dean of the university. His publications include Play and the Human Condition; Disputed Pleasures: Sport and Society in Preindustrial England; Play Reconsidered: Sociological Perspectives on Human Expression; and Selves, Societies, and Emotions: Understanding the Pathways of Experience.

Jay C. Kimiecik is Associate Professor in the Department of Kinesiology and Health at Miami University. He has written, lectured, and led workshops on numerous self-help development and family health-related topics, including health behavioral change, the social psychology of sports and exercise, and how families influence adolescent physical activity. He is the author of The Intrinsic Exerciser: Discovering the Joy of Exercise and Personal Fitness Program: 12 Weeks to a Better You, and his coauthored book chapters and articles have appeared in Advances in Sport Psychology, Handbook of Research in Applied Sport and Exercise Psychology: International Perspectives, Journal of Applied Sport Psychology, and Research Quarterly for Exercise and Sport.

Paula Thomson is Associate Professor at California State University, where she also serves as dance coordinator in the Department of Kinesiology. For the last three decades, she has held teaching appointments at Juilliard School of Music, Banff School of Fine Arts, and the University of Cape Town in South Africa. She is a licensed clinical psychologist and a certified sports psychologist and has been named one of the top twenty female professors in the state of California. S. Victoria Jaque is Associate Professor and Co-Director of the Exercise and Psychophysiology Laboratory in the Department of Kinesiology at California State University. Her research focuses on factors that influence the development of peak bone mass, including gender, dietary restrictions, and bone mineral density during adolescence. Thomson and Jaque have coauthored nearly two dozen articles on the effects of stress on performing artists, athletes, and patients with functional disorders. Together, their research has appeared in the Encyclopedia of Creativity, Psychology of Aesthetics, Journal of Trauma and Dissociation, and International Journal of Sport Psychology.