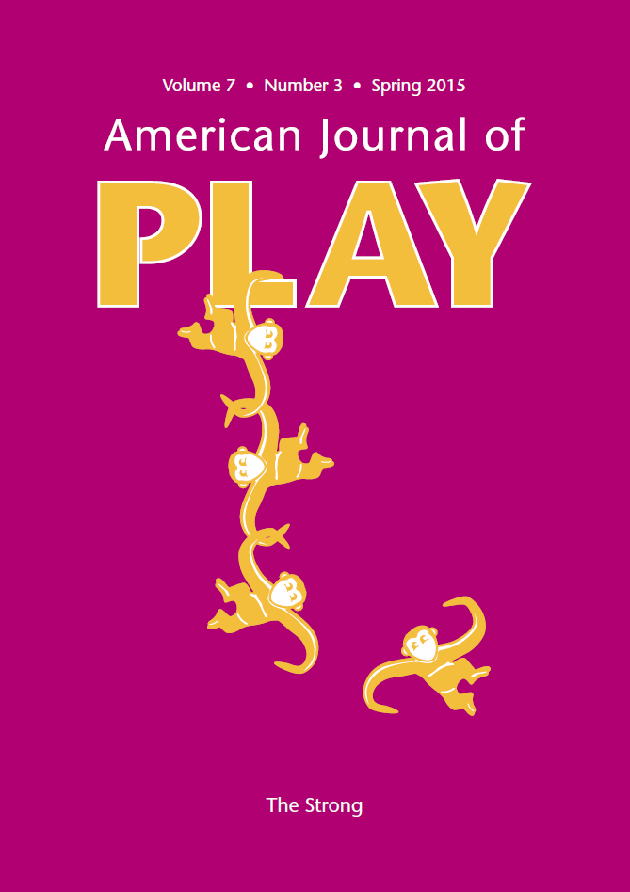 Play as a Basic Pathway to the Self: An Interview with Thomas S. Henricksopens PDF file

Thomas S. Henricks is the J. Earl Danieley Professor of Sociology and Distinguished University Professor at Elon University. Since receiving his doctorate in sociology at the University of Chicago, Henricks has investigated the sociology of sports from the fandom of modern American professional wrestling to the relationship between sports and social stratification in preindustrial England. Currently his interests include social theory, modernization and change, popular culture, race and ethnic relations, and, especially, the physiological, environmental, social, cultural, and psychological relationships that shape behavior and experience in sports and play. His Play and the Human Condition appeared in 2015. His other books include Disputed Pleasures: Sport and Society in Preindustrial England; Play Reconsidered: Sociological Perspectives on Human Pleasure; and Selves, Societies, and Emotions: Understanding the Pathways of Experience. Henricks also writes a blog “The Pathways of Experience” for Psychology Today, focusing on the nature of human play and other main avenues of human expression: work, ritual, and the civic spirit of celebration he calls communitas. In this interview, Henricks discusses the study of play and notes how play gives both scholars and players a way of understanding human potential individually, in small social circles, and in larger communities. Key words: communitas; leisure as play; play and emotions; play scholars; play studies; ritual; social experience; sport and play; work

The author defines play as something beyond culture and its quotidian practices, discussing play as an embodied, affective experience that cannot be fully conveyed using conventional language. She looks at notions of play in the political philosophy and cultural criticism of the late-modern thinkers of late-capitalist society and notes that, although they have studied play extensively and theorized about it as a psychological, sociological, and anthropological phenomenon, they do not think play transcends human activity and culture. This means, she argues, that political theory and play studies have lost a highly productive way of considering play. To rectify this loss, the author conducts a selective survey of play scholars, including Johan Huizinga, Thomas S. Henricks, and Mihai I. Spariosu, to help her make philosophical claims about play as a basic force, one which drives language to adapt to feelings, sensations, and experiences that language currently fails to represent adequately. She argues that a more extensive exploration of this idea might enable many popular theories of culture and politics to deal more honestly with resistance, social change, and revolution. In short, she argues for a theory of play as the force that allows us to imagine alternatives to current cultural verities. Key words: democracy and capitalism; language and power; late modernity; mysticism; philosophy of play; play theory; sociology of play

Based on a four-month experimental study of preschool children’s play with creative-construction and social-fantasy toys, the author examines the influence of both types of toys on the play of preschool children. Her comparative analysis considers the impact of transformative play on the development of imagination during play activities and explores ways to support children’s playful initiatives. She argues that, by transgressing play scenarios, children often develop a more playful attitude. Toys, imagination, and the setting are important factors in the play children initiate, and transgressing the immediate play scenario affects each of these factors. Key words: creative construction; social fantasy; negotiation in play; transgression and childhood development

More Play, Please: The Perspective of Kindergarten Teachers on Play in the Classroomopens PDF file

The past decade has seen an increase in research documenting the benefits of children learning through play. However, the amount of play in American kindergarten classes remains on a steady decline. This article compares the findings from a netnographic study of seventy-eight kindergarten teachers’ message board discussions about play in kindergarten with those of more traditional studies and finds the teachers’ discussions in broad agreement with past research. The results further demonstrate that kindergarten teachers feel pressures from other teachers, principals, and school policies to focus on academic goals and that these pressures lead them to limit play. The author argues for further research to develop effective strategies to help teachers include play in kindergartens rather than merely increasing teacher awareness of the benefits of play. She details how a netnographic approach can complement traditional methods for understanding how teachers treat play in their classrooms. Key words: kindergarten; netnography; No Child Left Behind Act (NCLB); play-based teaching; Social Ecological Theory (SET)

The authors argue that childhood played a special role in the cultural-historical theory of human culture and biosocial development made famous by Soviet psychologist Lev S. Vygotsky and his circle. They discuss how this school of thought has, in turn, influenced contemporary play studies. Vygotsky used early childhood to test and refine his basic principles. He considered the make-believe play of preschoolers and kindergartners the means by which they overcame the impulsiveness of toddlers to develop the intentional behavior essential to higher mental functions. The authors explore the theory of play developed by Vygotsky’s colleague Daniel Elkonin based on these basic principles, as well as the implications for play in the work of such Vygotskians as Alexei Leontiv, Alexander Luria, and others, and how their work has been extended by more recent research. The authors also discuss the role of play in creating the Vygotsky school’s “zone of proximal development.” Like these researchers, old and new, the authors point to the need to teach young children how to play, but they caution teachers to allow play to remain a childhood activity instead of making it a lesson plan. Key words: childhood development; cultural-historical psychology; Lev S. Vygotsky; preschool play; zone of proximal development

Meghan Lynch is a doctoral candidate in the Dalla Lana School of Public Health at the University of Toronto. Her research on play-based education programs and netnographic methodology has appeared in, among others, Childhood Education Journal, Contemporary Issues in Early Childhood, Early Childhood Development and Care, Health Education Journal, Journal of Nutrition Education and Behavior, Journal of Research in Childhood
Education, and Pediatric Nursing.

Signe Juhl Møller is a doctoral fellow and lecturer in the Department of Developmental Psychology at the University of Copenhagen, where her thesis deals with creative imagination in play. She has contributed articles to Child Development, Journal of International Research in Early Childhood Education, and Journal of Playwork Practice.

Rachel Shields is a doctoral student in the Department of English and Cultural Studies at McMaster University. Her research interests include socio-cultural studies of science and technology and utopianism in literature and politics.