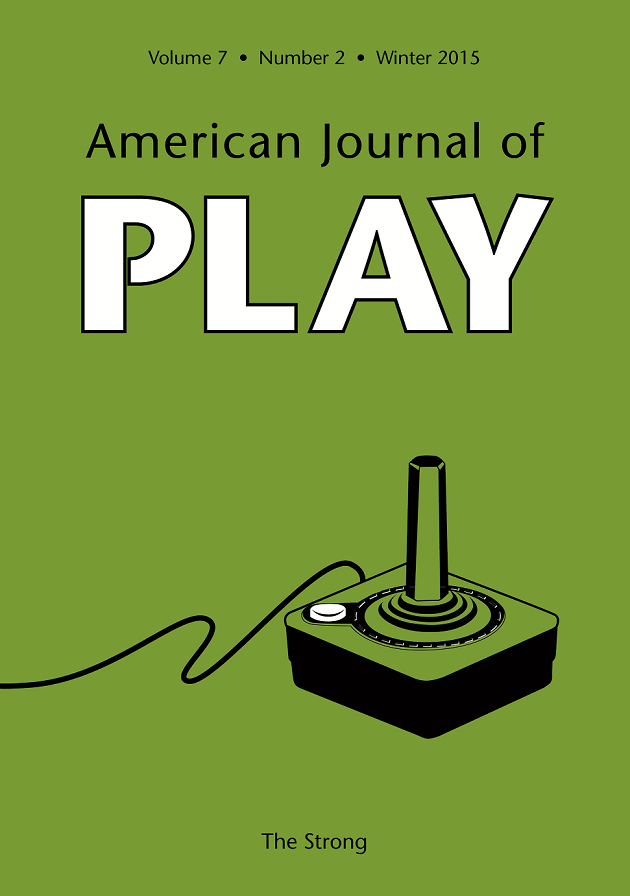 Deep Fun and the Theater of Games: An Interview with Bernie DeKovenopens PDF file

Bernie DeKoven is both a play theorist and a play practitioner. He is the author of The Well-Played Game (reissued in 2013 by MIT Press) as well as Junkyard Sports, Power Meetings, and Connected Executives and of the compact disc Recess for the Soul, an assemblage of monologues about playful meditation. A Playful Path, his most recent work, is a collection of essays from his popular blog deepFUN. In 2014 he teamed with the improv organization ComedySportz Indianapolis to stage his interactive show Play’s the Thing. DeKoven developed the interplay curriculum for Philadelphia’s public schools, and he has devised electronic games for toy and games manufacturers such as Ideal Toy Company, Children’s Television Workshop, Mattel Inc., and CBS software. This earned him an Ifil-Raynolds Award from the North American Simulation and Gaming Association. In 1971 DeKoven founded The Games Preserve, a retreat center in Eastern Pennsylvania dedicated to the exploration of games and play. In this interview, DeKoven talks about the virtues of playful play and discusses the roots of playfulness, the power of shared imagination, the joys of performing, the difference between schooling and learning, the perils of play deprivation, and the gentle, comic, restorative mischief of noncompetitive games. Key words: game design; improvisation; playful play, teaching games; The Games Preserve

The authors identify competitive speech and debate as a form of play that helped democratize American citizenship for the poor, who used what they learned through the practice to advance their personal social and economic goals. In addition, this competitive activity led to the development of speech communication as an academic discipline and legitimized the pedagogy of game theory. Through a brief overview of the evolution of competitive forensics, an overview of the theory of play and its role in personal development and interpersonal and group interaction, and an explanation of the theory of forensics as a form of playfulness, the authors show the impact of forensics on the course of educational practices in America. Key words: debate as play; competitive forensics; game theory

Gender Neutrality in Play of Young Migrant Children: An Emerging Trend or an Outlier?opens PDF file

The authors elaborate on the role of playfulness as a preferred characteristic in potential long-term partners recently espoused by Garry Chick and others. They aim to replicate the findings of such research by studying a different culture (that of German-speaking countries) and to develop them further by taking into account the participants’ relationship status and individual differences in their playfulness. A sample of 327 students completed a rating scale for desired characteristics in potential partners and a questionnaire for playfulness as a personality trait. Their findings do indeed lend support to the notion that being playful is a desirable trait of potential long-term mates. Keywords: Adult play; play and romantic relationships; play and sexual selection; playfulness; Preferences Concerning Potential Mates rating scale; Sexual Strategies Theory

In this article, the authors argue for a greater understanding of children’s play across cultures through better integration of scientific thinking about the developed and developing societies, through consideration of socialization beliefs and goals, and, finally, through the use of more complex models in research investigations. They draw on theoretical propositions in anthropology and psychology to describe and interpret the meaning of parent-child play activities in the context of everyday socialization practices in societies in various stages of economic development. Key words: cross-cultural studies; parent-child play; play’s effect on child development

Robert S. Littlefield is Professor of Communications at North Dakota State University. He is the author, coauthor, or editor of several books, including Forensics in America: A History; Intercultural Competency: Learning, Communicating, and Serving; Effective Risk Communication: A Message-Centered Approach; and Voices on the Prairie: Bringing Speech and Theatre to North Dakota. A contributor to numerous other works, he has also coauthored several workbooks and written dozens of articles that appear in the Journal of Management and Strategy, National Forensic Journal, Visual Communication Quarterly, The Forensic, and elsewhere. He has also lectured extensively and serves currently on the editorial board for Communication Studies. Michael D. Bartanen is Professor of Communications and Theatre at Pacific Lutheran University. His areas of interest include communication history and the history of the study of forensics in the United States. He is the author or coauthor of Forensics in America: A History; Nonpolicy Debate; Lincoln- Douglas Debate: Preparing for Value Argumentation; Teaching and Directing Forensics and a number journal articles on forensics. In addition, he is the secretary-treasurer of Pi Kappa Delta, a national speech and debate honorary society.

Smita Mathur is Associate Professor and Coordinator of Inclusive Early Childhood Education at James Madison University. She has lectured internationally on linguistics and early-childhood education; contributed articles and chapters to numerous journals and books; and is the author of Acculturation, Ethnic Identity, and Marriage among Asian Indians: An Intergenerational Perspective. She serves currently on the editorial board of Game-Supported Interactive Learning. Gowri Parameswaran is Professor of Education at the State University of New York at New Paltz. She is the coauthor of Women: Images and Reality; Social Conflict; Equity and Schooling in Developing Countries; and Educational Access and Social Equity: A Global Perspective. Her research has appeared in more than three dozen journals and books, and she has spoken on her work in the Canada, China, France, India, and the United States.

René T. Proyer is Assistant Professor of Psychology and Senior Assistant for the Department of Personality and Assessment at the University of Zurich, Switzerland. He is the author or coauthor of several books including Theorie und Praxis Objektiver Persönlichkeitstests. He has authored or coauthored more than one hundred articles and book chapters, and his work has appeared in such journals as European Journal of Psychological Assessment; Humor: International Journal of Humor Research; International Journal of Clinical and Health Psychology; Personality and Individual Differences; and Psychology Science. Lisa Wagner is research and teaching assistant at the University of Zurich, Switzerland. She has presented papers at scholarly conferences on psychology in the Czech Republic, the Netherlands, and Switzerland.

Jaipaul L. Roopnaire is Professor of Child and Family Studies and Director of the Jack Reilly Institute for the Early Childhood and Provider Education at Syracuse University. He also serves as Adjunct Professor of Teaching and Leadership in the School of Education at Syracuse and as Senior Research Scientist at the Family Development and Children’s Research Centre at the University of the West Indies, St. Augustine, Trinidad and Tobago. Roopnaire is the author, coauthor, editor, or coeditor of more than a dozen books, including Issues and Perspectives in Early Childhood Development and Education in Caribbean Countries; Approaches to Early Childhood Education; Caribbean Families: Diversity among Ethnic Groups; and Parent-Child Socialization in Diverse Cultures. He has contributed chapters to more than three dozen books, and his numerous articles have appeared in the Journal of Cross-Cultural Psychology, Journal of Family Psychology, and the Journal of Applied Developmental Psychology, among others. Roopnaire has lectured internationally and served as a board member and advisor for various organizations including the American Psychological Association and the National Association for the Education of Young Children. Kimberly L. Davidson is a doctoral candidate in the David B. Falk College of Sport and Human Dynamics at Syracuse University.