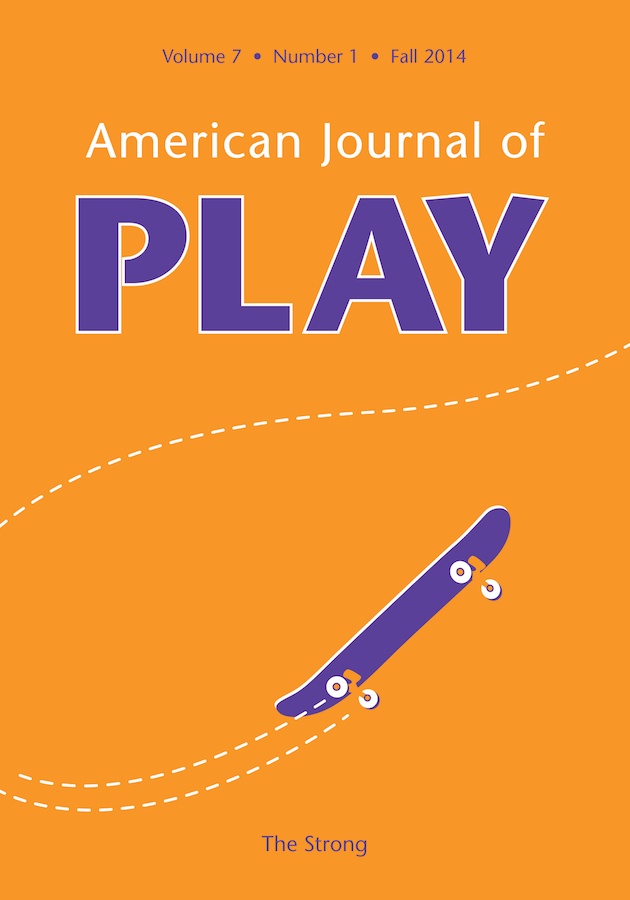 Welcome to the American Journal of Play special issue exploring the inter-disciplinary field of cognitive neuroaesthetics, which has attracted artists and art historians, neuroscientists, psychologists, and other researchers. Special theme issues focus on important topics in the fast-developing study of play; each is guest edited by an expert on the topic; and each includes work by the leading scholars in the field. Art historian Phillip Prager assembled this issue with the help of those participating in a conference called “The Importance of Being Playful,” which he organized in 2012 under the auspices of the Minerva Foundation at the University of California, Berkeley.

The issue opens with two interviews. In the first, British polymath Margaret Boden talks about the roots of human creativity and the similarities and differences of animal and machine intelligence. In the second, entomologist and photographer Mark W. Moffett discusses the meaning of playfulness in relation to his work with ants, a species that appears not ever to play. In the issue’s lead article, guest editor Prager reexamines Bauhaus art and theory in light of the neuropsychology of play. Behavioral neuroscientists Sergio M. Pellis, Vivien C. Pellis, and Brett T. Himmler report on the ways rough-and-tumble play help make rats and primates more sociable, more flexible, and more cognitively sophisticated. Psychologists Adam Eichenbaum, Daphne Bavelier, and C. Shawn Green, all specialists in perceptual learning, show how playing video games enhances perceptual and cognitive skills in game players. And psycho-analyst (and performer) Victoria Stevens provides a summary of recent research in neuroscience and the role of combinatory play in generating new ideas and artistic forms. Taken together, these articles illustrate how strongly recent scholarship links play to creativity.

A Polymath at Play: An Interview with Margaret Bodenopens PDF file

Margaret Boden is Research Professor of Cognitive Science at the University of Sussex, where she was the founding dean of the university’s School of Cognitive and Computing Sciences. Trained originally at the University of Cambridge and at Harvard University in medicine and the history of philosophy, she has since pursued and published in related fields such as psychology, social psychology, linguistics, neuroscience, cybernetics, control engineering, computer science, and artificial intelligence. A frequent interviewee on television and radio in the United Kingdom, she lectures widely in Europe, North and South America, and Asia. Boden is known best for two widely translated books, The Creative Mind: Myths and Mechanisms, where she draws on computational ideas to explore human intuition, and the two-volume history of cognitive science, Mind as Machine: A History of Cognitive Science, in which she investigates in a computational frame the range and latitude of consciousness itself. In this interview, Boden reflects on her diverse interests with special reference to the relationship of combinatory play to creativity and invention in science and technology, art and architecture, mathematics, philosophy, and literature. Key words: artificial intelligence; combinatory play; creativity; interdisciplinarity; invention; neuroaesthetics

Mark W. Moffett is a research associate at the Smithsonian Institution and a frequent contributor to and contract photographer for the National Geographic Society, which has dubbed him the “Indiana Jones of Entomology.” While earning his doctorate in organismic and evolutionary biology at Harvard University, he studied with Edward O. Wilson, founder of the field of sociobiology, and traveled across Asia studying ants. Subsequently, Moffett served as a curator at Harvard’s Museum of Comparative Zoology and held a research position for several years at the University of California, Berkeley. In addition to having written more than one hundred articles, he is the author of The High Frontier: Exploring the Tropical Forest Canopy and Adventures among Ants: A Global Safari with a Cast of Trillions (winner of a National Outdoor Book Award in 2010) and the children’s book Face to Face with Frogs. Moffett has appeared on The Tonight Show with Conan O’Brien and The Colbert Report and has received the Lowell Thomas Award from the Explorers Club, the Distinguished Explorer Award from the Roy Chapman Andrews Society, Yale University’s Poynter Fellowship in Journalism, and Harvard’s Bowdoin Prize for writing. In this interview, Moffett reflects on his study of ants, on their social organization, and on the similarities and differences between these mindless and playless creatures and humans. Key words: ants, army ants, sociobiology, superorganisms

Making Sense of the Modernist Muse: Creative Cognition and Play at the Bauhausopens PDF file

In a review of the methodology of the Bauhaus (Germany’s famous art school of the Weimar Republic era) in light of more recent scientific research on creativity and especially in light of the work of László Moholy-Nagy, the author examines the emphasis the school placed on play and positive emotions and concludes that it evinced a highly sophisticated understanding of creative cognition half a century ahead of science. He thus questions the modernist and rationalistic paradigms into which the Bauhaus has been enshrined and discusses its true relationship to the idea of play. Key words: Bauhaus; cognition; creativity and play; László Moholy-Nagy; philosophy; photography

Video Games: Play That Can Do Serious Goodopens PDF file

The authors review recent research that reveals how today’s video games instantiate naturally and effectively many principles psychologists, neuroscientists, and educators believe critical for learning. A large body of research exists showing that the effects of these games are much broader. In fact, some types of commercial games have been proven to enhance basic perceptual and cognitive skills. These effects are significant enough that educators use these games for such practical, real-world purposes as training surgeons and rehabilitating individuals with perceptual or cognitive deficits. Although many individuals may still consider video games nothing more than mindless fun, the authors argue that games serve also as serious tools for good. Key words: job training and video games; video games and cognition; video games and learning; video games and the elderly

How Play Makes for a More Adaptable Brain: A Comparative and Neural Perspectiveopens PDF file

Studies of rats and some primates show that rough-and-tumble play among juveniles improves social competence, cognition, and emotional regulation later in life. Most critically, such play makes animals better able to respond to unexpected situations. But not all animals engage in play, and not all animals that play appear to gain these benefits. Using a model developed by Burghardt (2005), the authors argue that there are enabling conditions—such as how behavior systems develop and the presence of surplus resources—that make play-like behavior possible. Once such behavior emerges, other enabling conditions help transform it into more exaggerated patterns of play that can be co-opted for various functions. For species living in complex social systems with an extended juvenility, play has become a tool to refine the control that the prefrontal cortex has over other neural circuits. Such control permits these animals to have more nuanced responses to a variety of situations. In short, the juvenile experience of play refines the brain to be more adaptable later in life. Key words: comparative studies; developmental benefits of play; play and adaptability; play in the animal kingdom

To Think without Thinking: The Implications of Combinatory Play and the Creative Process for Neuroaestheticsopens PDF file

Shelly McKenzie, Getting Physical: The Rise of Fitness Culture in America and Making the American Body: The Remarkable Saga of the Men and Women Whose Feats, Feuds, and Passions Shaped the Fitness Industryopens PDF file

Brenda Vale and Robert Vale, Architecture on the Carpet: The Curious Tale of Construction Toys and the Genesis of Modern Buildingsopens PDF file

Adam Eichenbaum is a research and teaching assistant at the University of Wisconsin-Madison and lab manager for the university’s Department of Psychology Learning and Transfer Lab. Daphné Bavelier is Research Professor of Brain and Cognitive Sciences at the University of Rochester and Head of the Bavelier Lab at the University of Geneva, Switzerland. She studies how the brain adapts to changes in experience and investigates how new media, such as video games, can foster learning and increase brain plasticity. Her more than seventy-five coauthored articles have appeared in, among others, Annual Reviews of Neuroscience, Development of Cognitive Neuroscience, Cognition, Computers in Human Behavior, Frontiers in Neuroscience, and Nature Neuroscience. C. Shawn Green is Assistant Professor of Psychology at the University of Wisconsin-Madison. His research on perceptual learning and transfer and the effects of video gaming on perception and cognition has appeared in Brain Research, Computers in Human Behavior, Current Biology, and Nature, among others. Green and Bavelier have contributed coauthored chapters to Cognitive Neuroscience, 4th Edition; SAGE Encyclopedia of Perception; Digital Media: Transformations in Human Communication; and Computer Games and Team and Individual Learning.

Phillip Prager is Assistant Professor in Digital Play and Aesthetics at the IT University of Copenhagen. His interdisciplinary approach interprets twentieth- century art through the lens of scientific research on creativity and play. He has worked extensively in both the film industry and academia and organized interactive exhibitions. His writings have appeared in Creativity Research Journal, Digital Creativity, and other publications.

Victoria Stevens is a clinical psychologist and psychoanalyst and an adjunct member of the faculty at the Pacifica Graduate Institute in Santa Barbara and the Santa Barbara Graduate Institute for Infant and Child Development. Her areas of interest include the development and inhibition of creativity in children and adults with an emphasis on the relationship between creative thinking and the brain and cognitive processes. She has contributed to A Reader’s Guide to Affect Regulation and Neurobiology, The Psychoanalytic Review, and Psychologist/Psychoanalyst and consulted and lectured widely, particularly in California, on topics such as integrating the arts and brain-based teaching techniques; the arts, brain development, and pedagogy; and creativity, imagination, and metacognition.