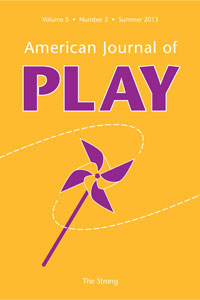 Play as Preparation for Learning and Life: An Interview with Peter Grayopens PDF file

Peter Gray, research professor at Boston College and past chair of its Psychology Department, originally trained in neurobiology at Columbia and Rockefeller University; but he now publishes in the fields of comparative, evolutionary, developmental, and educational psychology. In the academy, Gray is known best for his widely assigned university-level textbook Psychology, now in its sixth edition. His Psychology Today blog—“Freedom to Learn: Play and Curiosity as Foundations for Learning”—has earned a large following while drawing eclectically from recent scholarship in history, anthropology, sociology, and economics. Gray has long appreciated how spontaneous, unsupervised play aids self-directed learning and self-assurance in children, and he explores this natural process and its societal implications at length in his latest book, Free to Learn: Why Unleashing the Instinct to Play Will Make Children Happier, More Self-Reliant, and Better Students for Life. In this interview, Gray talks about the lifelong social, physical, and moral value of play, and he identifies and traces the consequences of factors that in recent decades have eroded opportunities to play. As a sharp and methodical critic of the way America currently delivers education, he offers remedies for creeping playlessness and academic underachievement that include a root-and-branch rethinking of mainstream schooling. Key words: definition of play; developmental psychology; evolutionary psychology; evolution of play; informal games; modern schools; play study; Sudbury Valley School.

In this article, the author outlines Plato’s notions of play in ancient Greek culture and shows how the philosopher’s views on play can be best appreciated against the background of shifting meanings and evaluations of play in classical Greece. Play—in various forms such as word play, ritual, and music—proved central to the development of Hellenic culture. In ancient Greece, play (paidia) was intrinsically associated with children (paides). However, both children and play assumed a greater cultural significance as literacy—and, consequently, education (paideia)— developed during the classical age of 500–300 BCE. Uniquely among ancient thinkers, Plato recognized that play influenced the way children developed as adults, and he proposed to regulate play for social ends. But Plato’s attitude toward play was ambivalent. Inclined to consider play an unworthy activity for adults, he seemed to suggest that intellectual play in some form, as demonstrated in the dialectical banter of Socrates, could provide a stimulus to understanding. Key words: education in ancient Greece; play and child development; play and education; play and Plato; Socratic dialectic

Why do people enjoy jigsaw puzzles, which—challenging and time-consuming as they are—might be considered more like work than play? The author investigates the motivations, preferences, and satisfactions of individuals working on jigsaw puzzles, and she explores how these elements of play relate to the procedures and strategies puzzlers use to assemble their jigsaws. She identifies four general approaches to completing these puzzles: the Explorer, Detective, Matchmaker, and Lion Tamer. She then describes how those who use these approaches differ in their openness to serendipity and flexibility, their attraction to the aesthetics of the puzzle picture, the degree of difficulty they embrace, and their relative interest in the process of puzzle assembly or in producing a finished puzzle. She concludes that the study of jigsaw puzzling helps us better understand leisure activities in general by allowing us more effectively to distinguish serious from casual leisure, explore the relationship of work to play, assess the importance of rules, investigate the relationship between product and process in play, and identify some of the intrinsic rewards that motivate play. Key words: sociology of leisure, jigsaw puzzles, play, motivation

Gender segregation in early-childhood social play is a pervasive pattern in North America, and child-development scholars have suggested it is a human universal. But very few researchers have looked at gender segregation in small-scale societies, particularly those of hunter-gatherers, whom the authors here call foragers. The authors present their observations of fifty-six, one- to four-year-old children living in two small-scale cultures—Bofi farmers and Bofi foragers—in Central Africa. They examined gender and age variation in the social play of these two groups and found that three- to four-year-olds became more segregated by gender than one- to two-year-olds and that boys in particular showed a tendency to play with other boys. The authors also found that cultural differences became more manifest as gender segregation grew more prominent among the children of Bofi farmers than Bofi foragers. Key words: Central Africa, early childhood, gender, gender segregation, sex segregation, social play

This article explores the role of play in human interaction with computers in the context of computer programming. The author considers many facets of programming including the literary practice of coding, the abstract design of programs, and more mundane activities such as testing, debugging, and hacking. She discusses how these incorporate the aesthetics, creative imagination, and game play of programmers. She suggests that the seemingly intractable and unplayful elements of computers, in fact, invite playful responses and actions by programmers and that programmers use play to understand, engage with, and creatively imagine and reconfigure the complexity of computer systems. She concludes that human-machine relationships and computer programming constitute fruitful areas for further play research. Key words: computer programming and poetry; debugging; hacking; human and computer relations; play and computers; testing

Peter Gray, Free to Learn: Why Unleashing the Instinct to Play Will Make Our Children Happier, Self-reliant, and Better Students for Lifeopens PDF file

Anthony T. DeBenedet and Lawrence J. Cohen, The Art of Roughhousing: Good Old-Fashioned Horseplay and Why Every Kid Needs It and Big Body Play: Why Boisterous, Vigorous, and Very Physical Play Is Essential to Children’s Development and Learningopens PDF file

Jon Peterson, Playing at the World: A History of Simulating Wars, People, and Fantastic Adventures: From Chess to role-Playing Gamesopens PDF file

Samantha Breslin is a doctoral candidate in philosophy and anthropology at Memorial University of Newfoundland. Her research explores the ethnography of computer scientists as gendered subjects. She has worked as a software developer, and she writes on the traditional music and politics of Newfoundland.

Armand D’Angour is Fellow, Tutor, and Lecturer for the Faculty of Classics at Jesus College, Oxford University. Author of The Greeks and the New: Novelty in Ancient Greek Imagination and Experience and Eureka: Lessons for Creativity and Innovation from the Ancient Greeks (forthcoming), he has also written about Greek culture for several anthologies and for such journals as Classical Quarterly, Journal of Classics Teaching, and Omnibus. D’Angour serves currently as Editor of the Jesus College Record.

Angela Cora Garcia is Associate Professor of Global Studies and Sociology at Bentley University. She conducts research on conversation in a variety of institutional settings, including mediation, emergency phone calls, and computer-mediated communications, as well as on the ethnology of animal rescue and of leisure. She is the author of the An Introduction to Interaction: Understanding Talk in Formal and Informal Settings (forthcoming), and work she has coauthored appears in several books and in such journals as Conflict Resolution Quarterly, Discourse & Society, Health Informatics Journal, and Journal of Contemporary Ethnography. Garcia serves currently on the editorial boards of Symbolic Interaction and Language@Internetcreate new email.