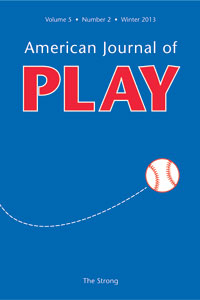 The Why, How, and What of a Museum of Play: An Interview with George Rollie Adamsopens PDF file

George Rollie Adams is a historian and former teacher who has worked in the museum field for forty years, twenty-five of them as president and CEO of The Strong, where he has led the development of the National Museum of Play, International Center for the History of Electronic Games, National Toy Hall of Fame, Brian Sutton-Smith Library and Archives of Play, and American Journal of Play. Prior to coming to The Strong, Adams served consecutively as Director of the National Historic Landmarks Project and Director of Education for the American Association for State and Local History, Executive Director of the Buffalo and Erie County Historical Society, and Assistant Commissioner of Culture, Recreation, and Tourism for the State of Louisiana with responsibility for the state museum system. He holds degrees in English, social science education, and history, and his publications include The American Indian: Past and Present (coeditor, first edition); Ordinary People and Everyday Life: Perspectives on the New Social History (coeditor); Nashville: A Pictorial History (coauthor); and General William S. Harney: Prince of Dragoons (author). In this interview, he talks about why and how The Strong evolved into the first collections-based museum anywhere devoted solely to the role of play in learning and human development and the ways in which play illuminates cultural history, and he describes the ways in which the institution carries out its educational mission.

The Use of Play Materials in Early Intervention: The Dilemma of Povertyopens PDF file

Play is a major component of early intervention for infants and toddlers with special needs. Many of these children are from low-income families with limited resources. The authors investigate the attitudes, practices, and concerns of earlyintervention providers (professionals whose services support young children with developmental disabilities and delay) concerning their use of toys in their work and their worries about poor youngsters without such playthings. The authors’ survey of 320 early-intervention providers revealed that nearly all took play materials with them into the homes of some children but most of them also used items already present there. More than 80 percent of providers gave toys to their clients because of their concern that the family’s poverty made toys scarce. As a group, physical therapists and occupational therapists were significantly less likely to use play materials they took into the homes. Most significantly, perhaps, all providers found that poverty increased the need for related therapist services, for educating parents about play, and for using play materials in therapy. Key words: developmental delays; early intervention; natural environment; play materials, poverty, provider attitudes

Play and the Avant-Garde: Aren’t We All a Little Dada?opens PDF file

Dada, an art movement that became well known in the late 1910s and early 1920s, challengeded traditional notions of art and aesthetics. Dada artists, for example, tossed colored scraps of paper into the air to compose chance-based collages, performed sound poems devoid of semantic value, and modeled a headpiece fashioned of sardine cans. To most art historians, Dada remains a culturally contingent expression of World War I trauma, nihilism, political disillusionment, and an aggressive attack on the moral bankruptcy of Western culture. The author suggests that this negative interpretation originates from art history’s methodological blindness to the importance of play, not only to creative and artistic endeavors, but to human identity itself. Dada is characterized by an effervescent love of improvisation, curiosity, novelty and an unselfconscious exploration of the phenomenal world; it emphatically professed to be “anti-art” and “a state-of-mind.” When considered from the perspective of play research and positive psychology, Dada emerges as an early and visionary milestone in understanding play as a fundamental expression of humanity almost a century before academia would take adult play seriously. Key words: Albert Ellis; avant-garde; cognitive-behavioral therapy; creativity; Dada; Marcel Duchamp; modernism; play; positive psychology; Richard Hülsenbeck

Robyn M. Holmes is Professor of Psychology at Monmouth University. Her research interests range from children’s artwork and the play of special needs children to children’s social behavior during video game play and college student-athletes’ conceptions of work and play. She is the author of Fieldwork with Children and How Young Children Perceive Race and has contributed chapters to Play = Learning: How Play Motivates and Enhances Children’s Cognitive and Social-Emotional Growth, Handbook of Computer Game Studies, and several volumes in the Play & Culture Studies series. Articles by Holmes have appeared in Early Child Development and Care, American Anthropologist, and the Journal of Sport Behavior. Sharon R. Liden is a practicing clinical psychologist and mental health supervisor in Lanai City, Hawaii. In addition, she serves as adjunct professor of graduate courses in group psychotherapy, existential and humanistic psychology, and child and adolescent psychology at Argosy University. She also served as a consulting psychologist for the reality television program Survivor. Lisa M. Shin is an educational assistant for the Primary School Adjustment Project in Lanai City, Hawaii.

Angeline Lillard is Professor of Psychology at the University of Virginia and Director of the university’s Early Development Lab. Her research considers how children’s interactions with pretend play, fantasy, imagination, and media influence their cognitive and social development. Lillard is the author of Montessori: The Science behind the Genius and numerous articles and essays. She has contributed to the Blackwell Handbook of Cognitive Development, the Oxford Handbook of the Development of Play, The Child: An Encyclopedic Companion, and other works. She has also lectured internationally and serves currently as Associate Editor of the Journal of Cognition and Development.

Evangeline E. Nwokah is Associate Professor and Chair of the Department of Communication and Learning Disorders at Our Lady of the Lake University. Trained academically in the United Kingdom and the United States, she has extensive clinical experience in England, Canada, and the United States and has taught in England, Nigeria, and America. She has written more than two dozen articles on early-childhood language and emergent literacy and is editor of Play as Engagement and Communication, volume 10 of the Play & Culture Studies series. Hui-Chin Hsu is Associate Professor of Human Development and Family Science at the University of Georgia. Her research considers the social-emotional development in parent-child interaction from infancy to preschool age and the role of culture in parenting efficacy. Her work has appeared in a number of journals including Infancy and Developmental Psychology, and she is coauthor of Change Processes in Interpersonal Relationships: Infant-Mother Communication in a Historical-Relational Perspective. Hope Gulker is Clinical Associate Professor and Codirector of Preschool Language Programs in the Department of Speech, Language, and Hearing Sciences at Purdue University. Her research considers music, affective development, and family participation in early-childhood settings.

Phillip Prager is Lecturer in Digital Play and Aesthetics at the IT University of Copenhagen. His interdisciplinary approach interprets twentieth-century art through the lens of scientific research on creativity and play. He has worked extensively in both the film industry and academia and organized interactive exhibitions. His writings have appeared in Creativity Research Journal, Digital Creativity, and other publications.