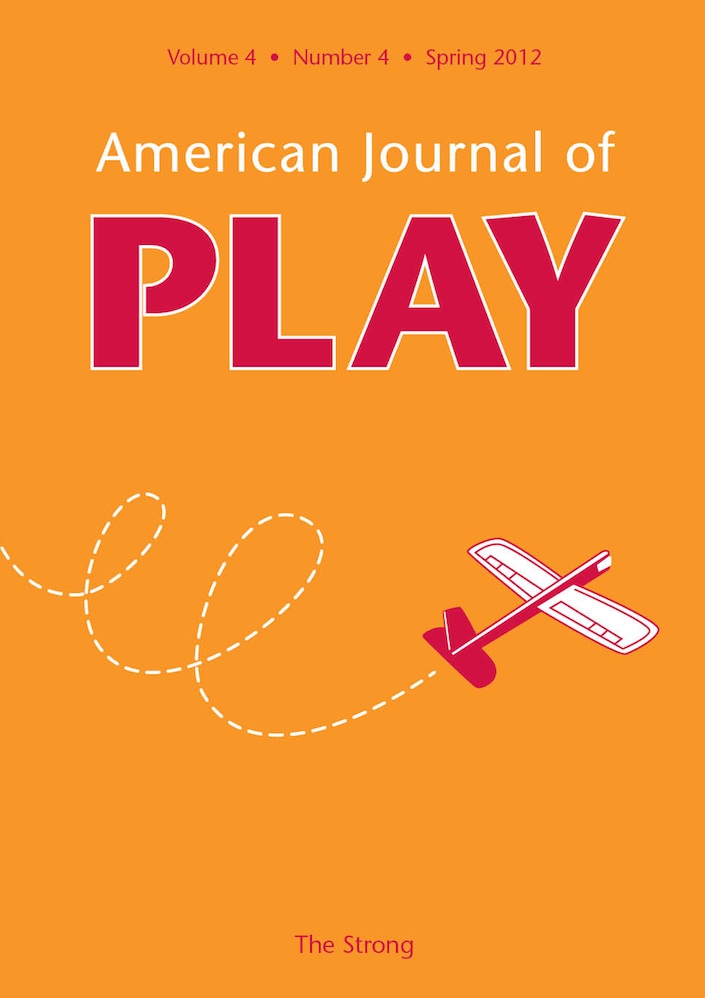 Play and Childhood in the American Past: An Interview with Howard Chudacoffopens PDF file

Howard Chudacoff is the George L. Littlefield Professor of American History and Professor of Urban Studies at Brown University and one of several coauthors of the popular textbook A People and a Nation (now in its ninth edition), which established the standard for instruction in social history in undergraduate classrooms. Chudacoff also coauthored The Evolution of American Urban Society (in its seventh edition), which surveys how political, economic, and social trends and issues of class, gender, culture, race, ethnicity, environment, social mobility, and suburbanization shaped life in America’s cities. In other books and scores of articles and papers, Chudacoff has explored family life, childhood, adolescence, aging, and leisure. His acclaimed Children at Play: An American History chronicles children’s exuberant play across the centuries as well as adult attempts to save children from their playful impulses. He is now at work on a book about the major turning points in the history of intercollegiate athletics during the second half of the twentieth century. In this interview, Chudacoff reflects on the challenges of writing about the history of play, the relationship between play and other topics and themes he has explored, and, particularly, about the relationship between play and sports in the United States. Key words: history of children’s play; childhood; college sports; family life; sports in the United States

The overwhelming majority of play research concerns juveniles. However, a full understanding of the phenomenon requires knowledge of play and playfulness across the life spans of those animals, including humans, who play in adulthood. The authors investigate a theory of play based on Darwin’s concept of sexual selection that may account for the existence of play among adult humans. The authors hypothesize that playfulness becomes a highly desired characteristic in potential long-term mates but also that the reasons for desiring playful mates differ for males and females. The authors suggest that for males, playfulness in females signals youth and, hence, fecundity; for females, playfulness in males signals nonaggressiveness. They test these hypotheses using mate-preference data. Key words: adult play and playfulness; play and mate preference; play evolution; sexual selection

If a wild animal habitually performs some useless activity, natural selection will favour rival individuals who devote the time and energy, instead, to surviving and reproducing. Nature cannot afford frivolous jeux d’esprit. Ruthless utilitarianism trumps, even if it doesn’t always seem that way.

In this study, the authors use psycho-cultural models of ethnic parental theories and acculturation to look at Indo Caribbean immigrant beliefs concerning the relationship between the amount of time children play and their early academic performance. During home interviews, fifty-seven Indo Caribbean couples offered their opinions about the importance of play for childhood development and estimated the amount of time their children both played and studied at home. The authors then tested each child for early academic performance using the Kaufman Survey of Early Academic and Language Skills. Mothers and fathers held discrepant beliefs about the value of play, and maternal beliefs about the cognitive benefit of play affected the relationship between the amount of time children play and their cognitive performance. The authors discuss the data in the context of immigrant acculturation and the impact the roles of parent and child have on determining the associations between play and childhood achievement. Key words: ethnicity and child rearing; immigrant acculturation; Indo Caribbean peoples; parental attitudes about play; play and early academic performance

The authors examine technology-driven games—especially active gaming—as an evolving form of children’s play. They offer an overview of play and its developmental benefits, describe the literature on the emergence of technology-driven play, and reflect on the diminishment of physical play in contemporary culture. They suggest that active gaming, which they describe in detail, not only meets the research-based definition of play, but also may fill the role of traditional play whose growing absence has left behind a vacuum. Key words: active gaming; play; physical activity; technology; young children

The author looks at children’s play from the perspective of interpretive reproduction, emphasizing the way children create their own unique peer cultures, which he defines as a set of routines, artifacts, values, and concerns that children engage in with their playmates. The article focuses on two types of routines in the peer culture of preschool children—approach-avoidance play and dramatic role play—and compares their importance. The author outlines the universal nature of these routines and how they can be embellished and extended. Key words: approach-avoidance play; children and social development; children’s peer cultures; dramatic role play; interpretive reproduction; la Strega; plying the frame; socialization

Mike Lanza, Playborhood: Turn Your Neighborhood into a Place for Playopens PDF file

Scott Rigby and Richard M. Ryan, Glued to Games: How Video Games Draw us In and Hold us Spellboundopens PDF file

William A. Corsaro is Professor of Sociology at Indiana University. Recipient of more than twenty research and teaching grants and awards, he has studied or taught in Germany, Italy, Norway, and Sweden. He is the author of Friendship and Peer Culture in the Early Years; The Sociology of Childhood; “We’re Friends, Right?”: Inside Kids’ Culture; and more than seventy-five scholarly book chapters and articles, including contributions to Sociology of Education, American Journal of Community Psychology, American Behavioral Scientist, and Research in Comparative and International Education. His work has also been featured on NPR, on the BCC in London, and in the New Yorker. Corsaro serves currently on the editorial boards of Sociological Studies of Children and Youth, Ethnografia e Ricerca Qualitativa, and Psicologia Culturale.

Jaipaul L. Roopnaire is Professor of Child and Family Studies and Director of the Jack Reilly Institute for the Early Childhood and Provider Education at Syracuse University. He also serves as Adjunct Professor of Teaching and Leadership in the School of Education at Syracuse and as Senior Research Scientist at the Family Development and Children’s Research Centre at the University of the West Indies, St. Augustine, Trinidad and Tobago. Roopnaire is the author, coauthor, editor, or coeditor of more than a dozen books, including Children and Adolescents Across Cultures; Caribbean Families: Diversity Among Ethnic Groups; and Parent-Child Socialization in Diverse Cultures. He has contributed chapters to more than three dozen books, and his numerous articles have appeared in the Journal of Cross-Cultural Psychology, Journal of Family Psychology, and the Journal of Applied Developmental Psychology, among others. Roopnaire has lectured internationally and served as a board member and advisor for various organizations including the American Psychological Association and the National Association for the Education of Young Children. Bora Jin is a doctoral candidate in Child and Family Studies at Syracuse University.

Lisa Witherspoon is Assistant Professor and Research Coordinator in the School of Physical Education and Exercise and codirector of the Active Gaming Research Laboratories at the University of South Florida. Her work has appeared in Digital & Cultural Education; Strategies: A Journal for Physical and Sports Education; and The International Council for Health, Physical Education, Recreation, Sports, and Dance Journal of Research. She has lectured internationally and is the managing editor of PE Central’s Active Gaming for Physical Education Teachers webpage. JohnP.Manning has served as Assistant Professor of Early Childhood Education at the University of South Florida. Previously, he worked as a children’s services manager and as an administrator for the licensing of child-care programs in Massachusetts. His current interests include child-care globalization, the use of medication in preschool settings, and the impact of folk psychology on college students’ perspectives of child development, and he has coauthored articles for Contemporary Issues in Early Childhood and the Journal of Australian Research in Early Childhood Education.