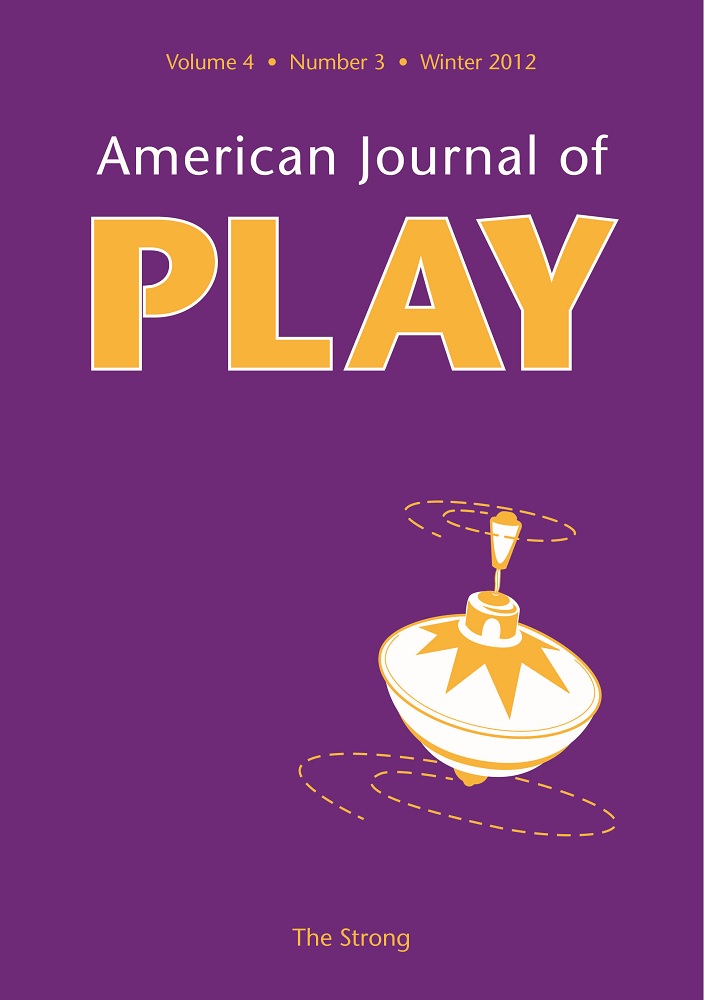 Fraser Brown, Professor in playwork and Lecturer at Leeds Metropolitan University in the United Kingdom, has become best known in North America over the last decade for helping expose the plight of abandoned and abused Romanian orphans. Brown advocates for environmental design strategies that enrich children’s play environments, and he is the author, editor, or coauthor of a number of works, including two that are forthcoming: Playwork: Theory and Practice; Foundations of Playwork; The Venture: A Case Study of an Adventure Playground; Rethinking Children’s Play and Play and Playwork: Reflections on Practice. In the interview that follows, Brown discusses the development of playwork as a discipline, a child’s inherent right to play (and the consequences of denying that right), the challenges of the noninterventionist approach, and the inventive, exuberant games he observed among Roma children in small villages in Transylvania. Key words: play among Roma children; play deprivation; playwork; Romanian orphans

Change Your Shoes, Change Your Life: On Object Play and Transformation in a Woman’s Storyopens PDF file

This article asks why adults play dress-up and investigates the role of object play in the making of magical thinking and the reforming of adult identity. The author looks at a wide spectrum of narratives and their genres—the fairy tale “Cinderella,” the film comedy Some Like it Hot, the epistolary novel Pamela, the film melodrama Now, Voyager, the psychoanalytical case study of “Miss K.,” and the memoir My Judy Garland Life. She asserts that these narratives help define what constitutes “a woman’s story” as a story of transformation by setting its representation in relation to objects or aesthetic worlds, into which the woman changes or immerses herself with the same intensity and single-mindedness as a child at play. The author draws on the works of psychoanalyst Christopher Bollas to explain the transformational object seeking and aesthetic moment of these narrative representations and argues they model a woman’s longing for transformation and make it imaginable to the adult mind. Key words: adult identity; a woman’s story; Christopher Bollas; comedy; dress-up play; fairy tale; melodrama; memoir, object play; psychoanalysis; transformation

For many centuries and in many cultures, jesters recited tales of heroic exploits, but they did more than simply recount past events—they amused, cajoled, and spun tales that transported listeners to the edge of mysterious, unmapped territories. Through the transformative power of play and the imagination, they reworked what was already understood and created from it new realities that transcended the established order. The author maintains that such imaginative play is vital to creativity in any medium and is fundamental for optimal human development. She explores possibilities for cultivating creativity through the playful, paradoxical stance of the jester—a serendipitous and purposeful, strange and familiar, disruptive and productive figure. Her discussion, grounded in a visual-arts practice that leverages uncertainty and randomness, considers the role of play in light of its wider implications for knowledge and creativity. Keywords: creativity; imagina- tion; jester; play and creativity

The Outdoor Recess Activities of Children at an Urban School: Longitudinal and Intraperiod Patternsopens PDF file

Based on a study of 149 parochial-school students enrolled in kindergarten through eighth grade, this article explores children’s outdoor recess activities in an urban setting—with a focus on how age, gender, and size of play group influence their outdoor play preferences—and examines changes in children’s activity preferences over a single recess period. The majority of the children in the study have African American and Hispanic ethnic heritages and lower-socioeconomic backgrounds. Both boys and girls spent most of recess socializing with their peers, though their play varied by gender and age. Most girls spent the majority of their recess talking and socializing. Older boys engaged in physical, competitive activities such as sports and in larger boy groups. Younger children spent more time chasing each other in boy-girl groupings and in informal activities. Girls interacted with their teachers more than boys. The author argues that these and other findings from the study have applied value, expanding our understanding of how cultural and historical factors have shaped the play of American children and indicating that urban school children of African American and Hispanic heritages are at a greater risk for obesity. Such findings would be useful in shaping school policy regarding the duration of recess breaks, the types of activities that should be encouraged, and the impact the policy might have on children’s overall health. Key words: age influ- ences on play activities; cultural influences on play activities; gender influences on play activities; outdoor recess; play references; school recess; time-sampling studies

The Play of Psychotherapyopens PDF file

The author reviews the role of play within psychotherapy. She does not discuss the formal play therapy especially popular for young children, nor play from the Jungian perspective that encourages the use of the sand tray with adults. Instead, she focuses on the informal use of play during psychotherapy as it is orchestrated intuitively. Because play—whether we use it consciously or not—is a major source for implicit learning within the social domain, the author considers it a nonspecific factor in therapeutic effectiveness that cuts across all modalities. She also suggests that play bears an important relationship to creativity, especially as it exists in the intersubjective space between therapist and patient, i.e., the fertile zone between two subjectivities in which shared making of meaning arises. Key words: clinical intuition; hide-and-seek in therapy; imaginative play; neurobiology of play; play in psychotherapy; play’s purpose in animals

Robert Desjarlais, Counterplay: An Anthropologist at the Chessboardopens PDF file

Darell Hammond, KaBOOm!: How One man Built a movement to Save Playopens PDF file

Robyn M. Holmes is Professor of Psychology at Monmouth University. Her research interests range from children’s artwork and the play of special-needs children to children’s social behavior during video game play and college student-athletes’ conceptions of work and play. She is the author of Fieldwork with Children and How Young Children Perceive Race and has contributed chapters to Play = Learning: How Play Motivates and Enhances Children’s Cognitive and Social-Emotional Growth, Handbook of Computer Game Studies and several volumes in the Play & Culture Studies series. Articles by Holmes have appeared in Early Child Development and Care, American Anthropologist, and the Journal of Sport Behavior.

Terry Marks-Tarlow is a practicing clinical and consulting psychologist in Santa Monica, California. In addition, she serves as an instructor at the Reiss Davis Child Study Center in California and as a research associate at the Institute for Fractal Research in Kassel, Germany. Her areas of interest include the application of neurobiological and nonlinear science to psychotherapy, creative blocks, self-expression and deep transformation, and the clinical interface between yoga and psychotherapy. She has lectured extensively and contributed to numerous journals. Her books include Creativity Inside Out: Learning Through Multiple Intelligences and Psyche’s Veil: Psychotherapy, Fractals and Complexity. Her recently published Clinical Intuition in Psychotherapy: The Neurobiology of Embodied Response is part of the Norton Series on Interpersonal Neurobiology.

Diane Rosen is an award-winning artist and educator who has taught or lec- tured at the Center for Professional Education of Teachers at Teacher’s College, Columbia University and at Parsons The New School for Design, among others. She is the author of Bringing Inquiry In: A Curriculum Guide and has studied, lectured, and shown her art internationally.

Kay Young is Professor of English at the University of California, Santa Barbara and has completed the Academic Fellows program at the Institute of Contemporary Psychoanalysis in Los Angeles. She is the author of Ordinary Pleasures: Couples, Conversation, and Comedy and Imagining Minds: Neuro-Aesthetics of Austen, Eliot, and Hardy, and her research and essays on gender, literature and the mind, and other topics have appeared in Narrative, LIT: Literature Interpretation Theory, and Partial Answers, among others.