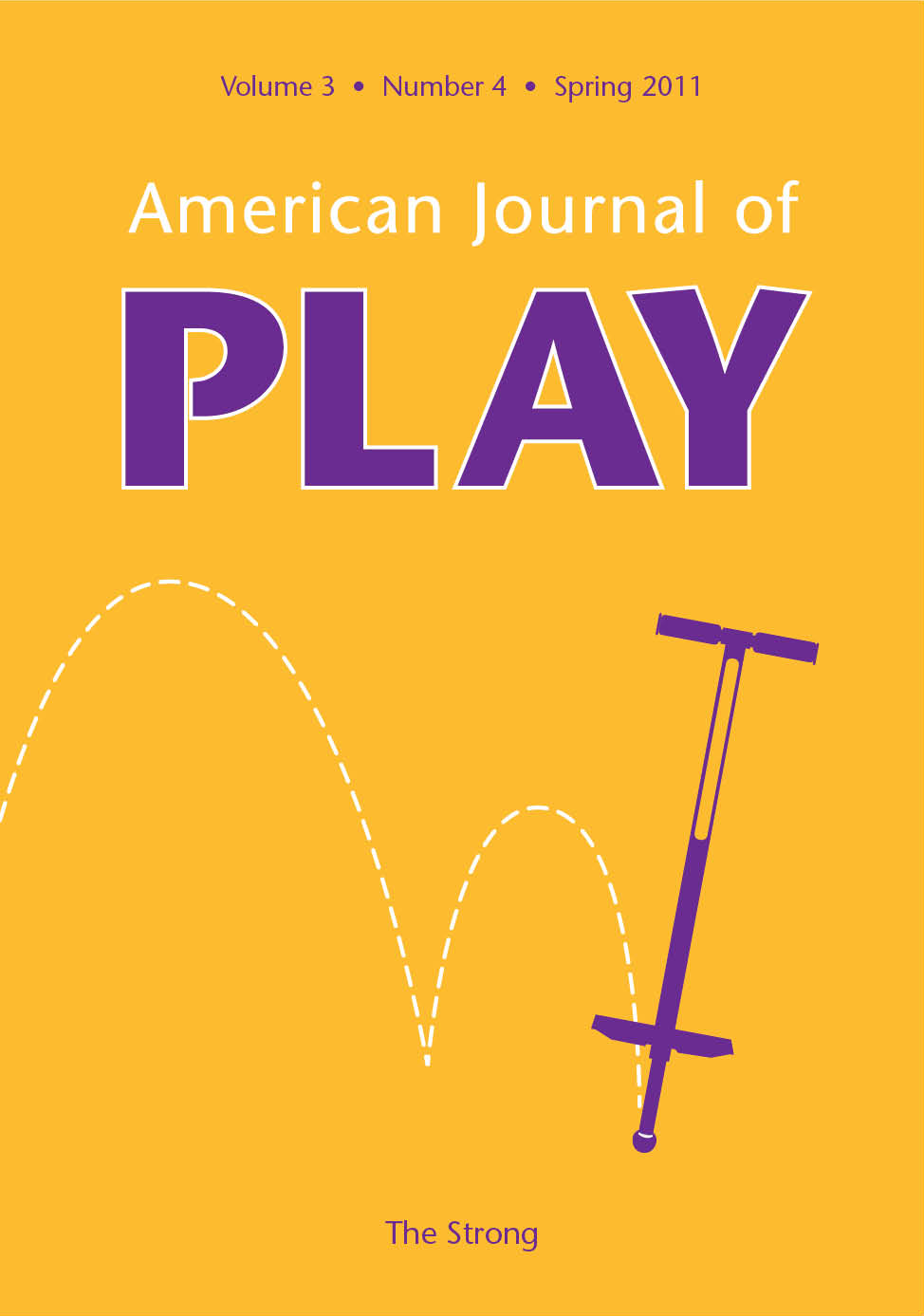 Welcome to the American Journal of Play special issue on free play, another in our series of theme issues that appear from time to time. Each focuses on an important topic in the fast-developing study of play. Each is guest edited by a distinguished expert on the topic. And each includes work by the leading researchers and thinkers on the topic. Guest-editor Peter Gray, author of the popular textbook Psychology and the widely read Psychology Today blog “Freedom to Learn,” assembled this issue with participants of “Empowering Neighborhoods and Restoring Play,” a symposium held in 2010 in Binghamton, New York, using work from them inspired by that conference. This special issue begins, then, with an interview of journalists Hara Estroff Marano and Lenore Skenazy, who diagnose the current fearful climate that deprives children of the mental, physical, and social benefits of playing. In the first of two articles, Gray follows the correlation between the sharp decline of free play and the steep rise in psychopathology in children and adolescents. In a second contribution, he describes the virtues of “age-mixed” play that, until very recently, characterized the free time of children. Evolutionary psychologist Peter La Freniere explores the heritage of play among mammals, noting how humans, especially boys, learn to regulate emotion through rough-and-tumble play. Anthropologist David F. Lancy examines rule making and rule breaking in the game of marbles to discover the roots of a crafty human intelligence and the dividends of playing outside the reach of interfering parents. Evolutionary biologist David Sloan Wilson, along with Danielle Marshall of the community playground-building group KaBOOM! and Hindi Isherhoff of Portland’s innovative City Repair initiative examine the organizational dynamics of creating successful play spaces. Wilson also provides an overview of the inventive Design Your Own Park Competition through which scholars, city planners, and funders enable neighborhoods to turn vacant urban spaces into parks and playgrounds. Taken together, these articles argue fervently for the value of free play and the urgency of restoring it.

Why Parents Should Stop Overprotecting Kids and Let Them Play: An Interview with Hara Estroff Marano and Lenore Skenazyopens PDF file

Hara Estroff Marano and Lenore Skenazy have long observed and chronicled the decline of free play in the United States. Marano, for nearly twenty years an editor at large for Psychology Today and formerly its editor in chief, writes feature articles and the magazine’s advice column, “Unconventional Wisdom.” She has also written about human emotion and behavior for Smithsonian, Marie Claire, New York Magazine, Self, the New York Times, and others. Marano is a member of the advisory board of the Bringing Theory to Practice Project, an Association of American Colleges and Universities initiative, which promotes the cognitive, emotional, and civic development of students. She is the author of Why Doesn’t Anybody Like Me? A Guide to Raising Socially Competent Kids (1998) and A Nation of Wimps: The High Cost of Invasive Parenting (2008). Skenazy is a nationally syndicated columnist and former staffer of National Public Radio and Mad Magazine. She wrote Free-Range Kids: How to Raise Safe, Self-Reliant Children (2010) and created the Free-Range Kids blog. In this dual interview, Marano discusses the faltering resilience of young people, the rise of cautious overparenting, and narcissistic parental expectation; and Skenazy describes how misplaced fear drives American parents to comic lengths in protecting their children against imagined danger. Key words: coping skills; free-range play; nation of wimps; outdoor play; parenting styles; parental fears

Over the past half century, in the United States and other developed nations, children’s free play with other children has declined sharply. Over the same period, anxiety, depression, suicide, feelings of helplessness, and narcissism have increased sharply in children, adolescents, and young adults. This article documents these historical changes and contends that the decline in play has contributed to the rise in the psychopathology of young people. Play functions as the major means by which children (1) develop intrinsic interests and competencies; (2) learn how to make decisions, solve problems, exert self-control, and follow rules; (3) learn to regulate their emotions; (4) make friends and learn to get along with others as equals; and (5) experience joy. Through all of these effects, play promotes mental health.  Key words: anxiety; decline of play; depression; feelings of helplessness; free play; narcissism; psychopathology in children; suicide

Many research findings about animal play apply to children’s play, revealing structural and functional similarities with mammals in general and primates in particular. After an introduction to life-history theory, and before turning to humans, the author reviews research about the two mammals in which play has been studied the most extensively: laboratory rats and monkeys. He looks at the development of play, deprivation studies, gender segregation, and the functions of gender-differentiated forms of play. The gender segregation and sex differences in play parenting and rough-and-tumble play observed in many primates are also evident in children. Vigorous social-play benefits all children physically by developing strong bones and muscles, by promoting cardiovascular fitness, and by encouraging exercise habits that help prevent obesity. Unsupervised play also helps hone the skills of communication, perspective taking, and emotion regulation. For boys especially, rough-and-tumble play in early childhood provides a scaffold for learning emotion-regulation skills related to managing anger and aggression. Key words: emotion regulation; life-history theory; play deprivation; play of mammals; play of primates; play parenting; rough-and-tumble play; social play

From an evolutionary perspective, the normal social play of children involves kids of various ages. Our human and great-ape ancestors most likely lived in small groups with low birth rates, which made play with others of nearly the same age rare. Consequently, the evolutionary functions of children’s social play are best understood by examining play in groups that include children of different ages. The author calls this kind of play “age mixed.” He reviews the research on such play, including his own research conducted at the Sudbury Valley School in Massachusetts where students from ages four to about eighteen mix freely. He concludes that age-mixed play offers opportunities for learning and development not present in play among those close in age, permitting younger children to learn more from older playmates than they could from playing with only their peers. In age-mixed play, the more sophisticated behavior of older children offers role models for younger children, who also typically receive more emotional support from older kids than from those near their own age. Age-mixed play also permits older children to learn by teaching and to practice nurturance and leadership; and they are often inspired by the imagination and creativity of their younger playmates. Key words: age-mixed play; bidirectional learning; evolutionary functions of play; mixed-age play; Sudbury Valley School

Creating play environments for children usually requires groups of adults working together. An extensive scientific literature describes how groups function to achieve shared goals in general terms, and groups attempting to empower play may find this literature useful. Design principles for managing natural resources, identified by Elinor Ostrom and for which she received the Nobel Prize in 2009, provide an exceptionally practical guide for all groups attempting to achieve common goals. In this article, the authors discuss the related scientific literature and connect it to the experience of two national organizations creating outdoor environments for play—KaBOOM! and City Repair. Key words: City Repair; designing play environments; design principles for resource management; Elinor Ostrom; KaBOOM!

The Design Your Own Park Competition: Empowering Neighborhoods and Restoring Outdoor Play on a Citywide Scaleopens PDF file

This article describes the thinking behind and the implementation of the Design Your Own Park (DYOP) Competition, a collaborative project of a university, a city, and a fund-raising organization to empower neighborhoods and restore outdoor play citywide in Binghamton, New York. The city makes vacant lots and other neglected spaces available for neighborhoods to turn into parks that residents design and build with the assistance of faculty and students from Binghamton University’s Binghamton Neighborhood Project. The United Way of Broome County assists with funding required for implementation. Neighborhood groups help maintain their parks, which increases ongoing interactions among neighbors and reduces city maintenance costs. While it is too early to access the DYOP Competition fully, it provides a science-based model for other cities seeking to coordinate efforts around large-scale community projects. Key words: Binghamton Neighborhood Project; Design Your Own Park Competition; Elinor Ostrom; Evolution Institute; neighborhood organizations; park design

Peter Gray is Research Professor of Psychology at Boston College. He is the author of six editions of the textbook Psychology and author or coauthor of numerous articles on psychology, behavioral biology, and teaching. Gray serves on the editorial board of the Journal of Social, Evolutionary, and Cultural Psychology and is a member of the advisory board of the Evolution Institute and a trustee of the Sudbury Valley School in Farmington, MA. He also writes the Freedom to Learn blog for Psychology Today.

Peter F. LaFreniere is Professor of Psychology at the University of Maine. He is the author of Adaptive Origins: Evolution and Human Development, and his articles have appeared in Development and Psychopathology and the Journal of Social, Evolutionary, and Cultural Psychology, among others. LaFreniere is a trustee of the International Society for Human Ethology and has presented his research on peer relationships in children both in the United States and abroad.

David Lancy is Professor of Anthropology at Utah State University. He has conducted fieldwork on children’s lives in Liberia, Papua New Guinea, Trinidad, Sweden, and the United States. He is the author of five books including The Anthropology of Childhood: Cherubs, Chattel, and Changelings and Playing on the Mother-Ground: Cultural Routines for Children’s Development. He has also presented his research at conferences around the world and contributed dozens of articles to edited volumes and journals including American Anthropologist, Anthropology and Education Quarterly, Child Development, and International Journal of Behavioral Development. M. Annette Grove holds a graduate degree in human development from Utah State University, and her research centers on parental beliefs and behaviors in regard to play and education. She has presented her work at an annual meeting of the Society for Anthropological Sciences and is coauthor of a chapter in The Anthropology of Learning in Childhood.

David Sloane Wilson is SUNY Distinguished Professor for the Department of Biology and Anthropology at Binghamton University, SUNY, where he founded the Evolutionary Studies program. He is author of Evolution for Everyone: How Darwin’s Theory Can Change the Way We Think About Our Lives and Darwin’s Cathedral: Evolution, Religion, and the Nature of Society. He is coauthor of Unto Others: The Evolution and Psychology of Unselfish Behavior and The Literary Animal: Evolution and the Nature of Narrative and has contributed articles to a number of journals including American Scientist, Quarterly Review of Biology, and Evolution and Human Behavior. Wilson has served as vice president of the American Society of Naturalists and on the editorial board of Human Behavior and Evolution Society and currently contributes to ScienceBlogs. Danielle Marshall is Senior Manager of Research and Education at KaBOOM!, a not-for-profit community playground-building organization that has facilitated the construction of thousands of play spaces for children throughout the United States. Previously, she worked at Jumpstart for Young Children where she created training materials and conducted observation and feedback sessions for educators. Hindi Iserhott is a former president of the board of directors of City Repair, a Portland, OR, not-for-profit dedicated to an ecologically sustainable society. Previously, she worked for Depave, a Portland organization that promotes the removal of unnecessary pavement from urban areas to create community green spaces.