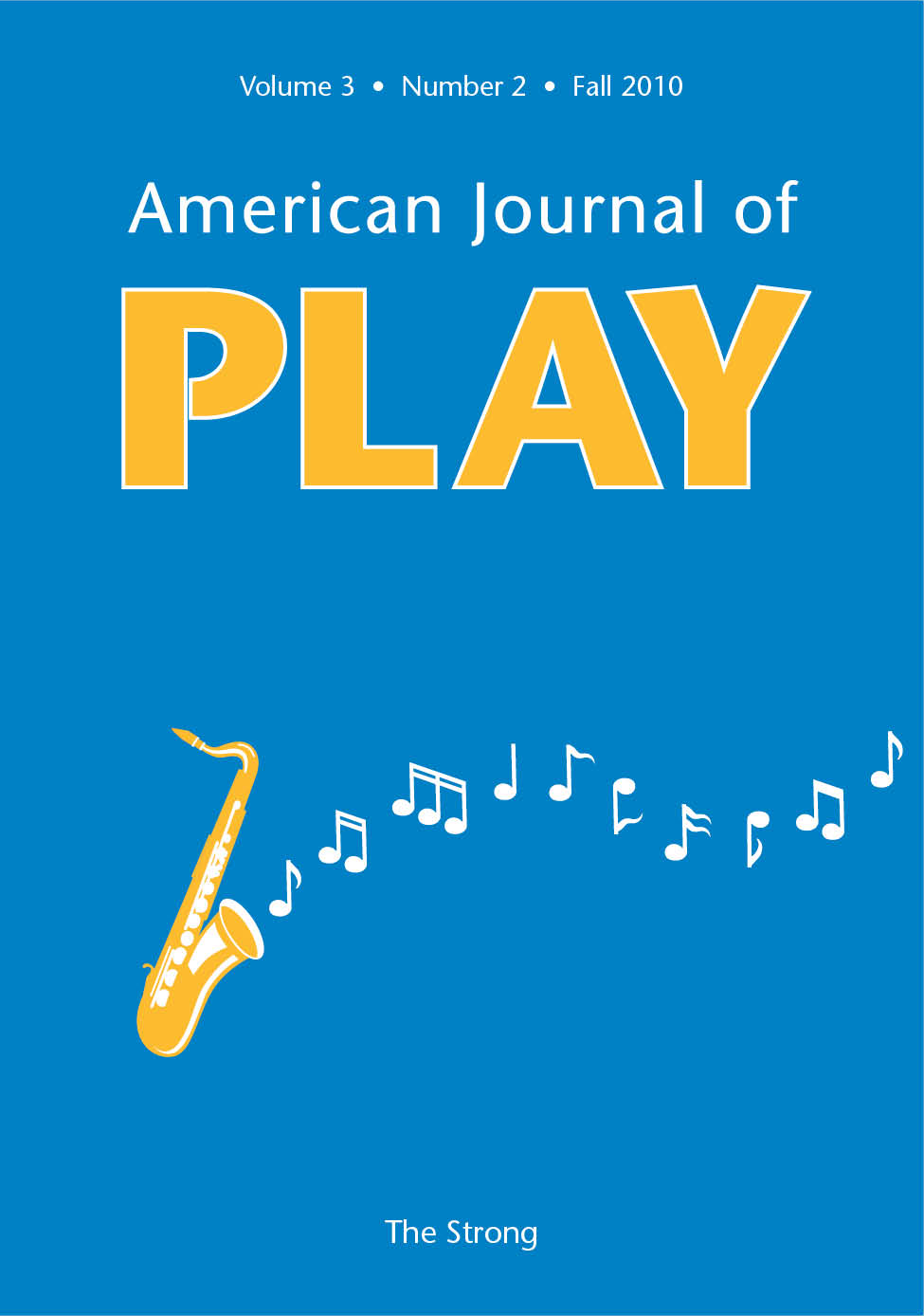 Play and the History of American Childhood: An Interview with Steven Mintzopens PDF file

An authority on the history of American children and families, Steven Mintz is a professor of history at Columbia University, where he also directs the Graduate School of Arts and Sciences Teaching Center. Previously, he was a fellow at the Center for Advanced Study in the Behavioral Sciences at Stanford University and the Moores Professor of History at the University of Houston, where he founded and directed that university’s American Cultures Program and served as an associate dean. He is the author or editor of thirteen books, including Domestic Revolutions: A Social History of American Family Life (1988) and Huck’s Raft: A History of American Childhood (2004), which received the Organization of American Historians’ 2005 Merle Curti Award as the best book in American social history and the Association of American Publishers’ 2005 R. R. Hawkins Award as the best scholarly book. Among many other professional activities, Mintz is president of the Society for the History of Childhood and past president of H-Net: Humanities and Social Sciences online. He has also served as national cochair of the Council on Contemporary Families, as chair of the Organization of American Historians’ Teaching Committee, and on the advisory board of Film and History. He is the founder of the Digital History website (www.digitalhistrory.uh.edu), which is used by some one hundred thousand students and teachers each week. In this interview, Mintz discusses how Americans have regarded childhood and play, how our attitudes have changed over time, and how popular culture—particularly motion pictures but also other entertainment media—both reflect and affect our views of play.

Play in the Sandpit: A University and a Child-Care Center Collaborate in Facilitated-Action Researchopens PDF file

Sand play commonly occupies children at preschools, child-development centers, and school and park playgrounds. The authors review the research on sand play and present a small study on outdoor sand play conducted at a university-based, child-development center using a method they call facilitated-action research. This study had four primary purposes: to detail who played in the sand area by age and gender; to identify any children who did not play in sand at all; to record what kinds of play sand encouraged; and to determine the effects of adding new play materials to the sand area. The authors conclude with some suggestions for further research.

The Candy Land board game has been in production since 1949 and remains one of the best-known and biggest-selling children’s board games of all time. Beginning with the fiftieth-anniversary edition in 1998, Hasbro Inc. has promoted the story of how a retired schoolteacher named Eleanor Abbott came to invent Candy Land while recuperating in a polio ward in San Diego. Although Candy Land appears all sweet pleasure and harmless fun, the coincidence of the invention and manufacture of Candy Land with the polio scares of the midtwentieth century suggests an important connection between the discourse of the “endangered child” and the image and ideal of childhood and play given material form in the Candy Land game. This article considers the form of game play and the imagery of Candy Land to show how the fears, images, and experiences surrounding the midcentury polio outbreaks came to shape a new idea of children’s play. Play in Candy Land is a therapeutic intervention that separates children from their bodies both to protect them from their bodies’ vulnerabilities and to form their bodies and desires into the proper paths.

Summer camps provide opportunities for children to experience play, pleasurable activities, and social interaction with other children of similar ages and interests and are an integral part of the modern-day American cultural landscape. The authors discuss the emergence of summer camps for children with special needs, the types of play activities in such camps, and how therapeutic and learning goals are incorporated into this play. They critically examine outcomes of summer camp experiences for children with special needs as reported in the literature. And they provide suggestions for future research that considers the role of play in summer camps.

This article explores the contributions of Roger Caillois to the study of human play. The initial portion of the essay focuses on Caillois’s scholarly career as a response to the public events and intellectual movements of his time. The author shows how Caillois’s responses influenced the portraits of play that he developed in such important books as Man and the Sacred and Man, Play, and Games. The article then analyzes the themes Caillois developed in these writings and compares them to Johan Huizinga’s interpretation of play in Homo Ludens. In a final section, the article shows the continued pertinence of Caillois’s approach to contemporary scholarship and offers author’s own evaluation of this theory.

Scott G. Eberle and Strong National Museum of Play, Classic Toys of the National Toy Hall of Fame: A Celebration of the Greatest Toys of All Time!opens PDF file

Jacky Kilvington and Ali Wood, Reflective Playwork: For All Who Work with Childrenopens PDF file

Thomas S. Henricks is Distinguished University Professor at Elon University. His interests as a sociologist include social theory, modernization and change, popular culture, social stratification, race and ethnic relations, and, particularly, play and sport. His numerous publications include Disputed Pleasures: Sport and Society in Preindustrial England (1991) and Play Reconsidered: Sociological Perspectives on Human Expression (2006). Among his current research interests is change in the social organization of enjoyment in the last century.

Olga S. Jarrett is Associate Professor in the Department of Early Childhood Education at Georgia State University. She has served as president of The Association for the Study of Play (TASP) and the American Association for the Child’s Right to Play (IPA/USA) and is coeditor of Investigating Play in the 21st Century, volume seven of TASP’s Play & Culture Studies series. Her research focuses on recess and playground behavior, bully prevention, effective teaching in urban schools, and methods for teaching science. She has contributed to The Journal of Educational Research, School Science and Mathematics, and Curator: The Museum Journal. Stacey French-Lee is Program Director of the Child Development Center and Child Enrichment Center at Georgia State University. As director, she manages the center’s status as a member of NALS, the international association of laboratory-and university-affiliated schools engaged in teacher training, curriculum development, research, professional development, and educational experimentation. She has presented papers at the annual conferences of TASP and the Society for College and University Planning. Nermin Bulunuz is Research Assistant in the Department of Education and Biological Sciences at Uludag University in Turkey. She has presented papers at the International Education Conference and the National Science Teachers Association Conference, and her work has appeared in the Journal of Turkish Science Education; School Science and Mathematics; and Eurasia Journal of Mathematics, Science, and Technology Education. Mizrap Bulunuz is Assistant Professor of Elementary Education at Uludag University. His research interests include science education, the integration of science and play in preschool, and inquiry dialogue and argumentation in science education. He has presented papers at conferences in the United States, Greece, and North Cyprus and contributed articles to the Journal of Turkish Science Education, International Journal of Environmental and Science Education, and Asia-Pacific Forum on Science Learning and Teaching.

Samira Kawash is Professor Emerita in Women’s and Gender Studies at Rutgers University. Author of Dislocating the Color Line: Identity, Hybridity, and Singularity in African-American Narrative, she has contributed articles to the Journal of American Culture, Public Culture, PAJ, and other journals. She has also written chapters in books such as Frantz Fanon: Critical Perspectives, The New Economic Criticism: Studies at the Intersection of Literature and Economics, and Passing and the Fictions of Identity. She is working currently on a book about the cultural history of candy in twentieth-century America.

Evangeline E. Nwokah is Department Chair and Associate Professor of Communication and Learning Disorders at Our Lady of the Lake University. Trained academically in the United Kingdom and the United States, she has extensive clinical experience in England, Canada, and the United States and has taught in England and Nigeria, as well as the United States. She has written more than two dozen articles on early childhood language and emergent literacy and is editor of Play as Engagement and Communication, volume ten of the Play & Culture Studies series. Mary Kristen Clark is a doctoral candidate at the University of North Carolina at Greensboro. Before entering the program, she worked as a speech-language pathologist in public schools. She has presented papers at a number of speech, language, and hearing conferences, and she has coauthored works soon to appear in the journal Language, Speech, and Hearing Services in Schools, the Pediatric Neurology Handbook of Clinical Neurology, and the online International Encyclopedia of Rehabilitation.