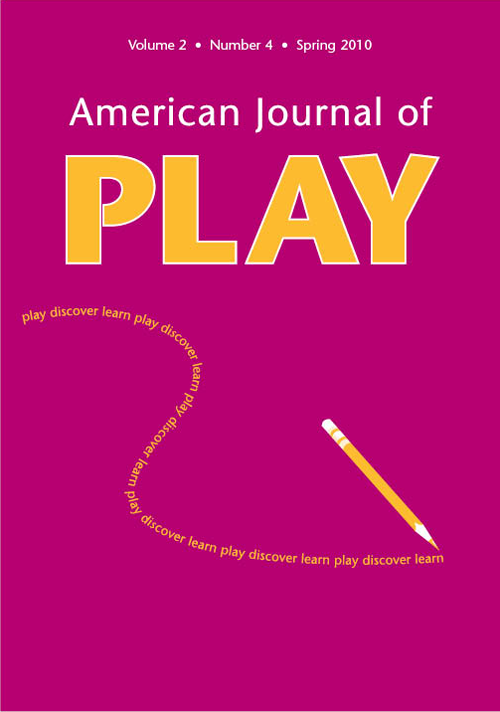 Welcome to the American Journal of Play special issue on children’s literature and play, another in our series of theme issues that will appear from time to time. Each focuses on an important topic in the fast-developing study of play. Each is guest edited by a distinguished expert on the topic. And each includes work by the leading researchers and thinkers on the topic. Guest-editor Mark I. West—president of the Children’s Literature Association—has assembled this issue, which begins with an interview of John Morgenstern, author of Playing with Books: A Study of the Reader as Child. Anne K. Phillips discusses the implications of play in Louisa May Alcott’s novel Little Women. Jan Susina reviews Lewis Carroll’s use of games and other forms of heady play in Alice in Wonderland and Through the Looking Glass. Our guest editor explores the lingering impact of imaginative play in Mark Twain’s novels and Walt Disney’s theme parks, especially when it involves pirates. Elizabeth Gargano uses Eleanor Estes’s novel The Witch Family to consider the nature of fantasy play. And Christiane Bongartz and Esther Gilman Richey employ theories of generative grammar to help explain the extensive play in Salman Rushdie’s Haroun and the Sea of Stories. Together these make a case for reading (and by extension, writing) as a form of play, something that is both its own reward and a necessity for a healthy childhood.

The Children’s Novel as a Gateway to Play: An Interview with John Morgensternopens PDF file

John Morgenstern has taught literature and literacy at Mount Saint Vincent University in Halifax, Nova Scotia, for more than thirty years. He traces his interest in children’s literature and play to his boyhood experiences: he read four novels a week—the maximum he could take from the bookmobile that served his Toronto suburb—and incorporated the stories into his play in the nearby Scarborough Bluffs. As an adult, he approaches children’s literature with a more academic bent but remembers his boyhood responses to children’s novels well. They inform his thinking in his Playing with Books: A Study of the Reader as Child, published in 2009. Noteworthy for its consideration of reading as play, the book is a short but sweeping volume in which Morgenstern explores the history of children’s literature, literacy and the modern conception of childhood, the role of play in the psychological development of children, and narrative techniques in children’s novels. In this interview, he discusses how children’s novels serve as an entry point for play.

Nineteenth-century literature offers insights into the history and sociology of play in American life. Louisa May Alcott’s novel Little Women contains especially rich period depictions of childhood games and amusements and provides some of the earliest scenes of American girls at play. The author discusses the various depictions of play in the novel, places these in the context of Alcott’s life and work, and contrasts them to other works of the period. She contends that Little Women, detailing and celebrating play from start to finish, demonstrates how play was both valued for itself and served a socializing function. She also presents scenes from Little Women to illustrate specific aspects of nineteenth-century American play—its use of furniture and the place of dolls, for example. In short, the author treats Little Women as a privileged example to discuss play more generally, and she uses the study of play to look more carefully at the novel itself.

Mathematician Charles Dodgson’s love of play and his need for rules came together in his use of popular games as part of the structure of the two famous children’s books, Alice in Wonderland and Through the Looking-Glass, he wrote under the pseudonym Lewis Carroll. The author of this article looks at the interplay between the playing of such games as croquet and cards and the characters and events of the novels and argues that, when reading Carroll (who took a playful approach even in his academic texts), it is helpful to understand games and game play.

Like many a modern play theorist, both Mark Twain and Walt Disney were enchanted by the way children act out stories, in particular pirate tales. For both Twain and Disney, this fascination grew out of their small-town, midwestern boyhoods, where avid reading and fantasy play helped stave off boredom and fill emotional gaps for both of them. Even while remaining true to their literary convictions, both men understood how children incorporated and changed printed stories to fit their imaginations, and both wove this insight into their adult creations—Twain into his novels and Disney into his theme parks and theatrical productions. Indeed, the pirates that haunted The Adventures of Tom Sawyer became the focus of Tom Sawyer Island at Disneyland and Disney World.

The author contends that reading some narratives of make-believe can become for many children the ultimate form of fantasy play, providing them with a sense of control absent in their real world. She employs terms from French structuralist critic Gérard Genette, from Austrian child psychologist Bruno Bettelheim, and from English pediatrician D. W. Winnicott, to discuss Eleanor Estes’s classic 1960s children’s novel The Witch Family. The author shows how the embedded stories of the work engage its young readers in narrative games and offers them a complex picture of children at play, one they recognize and enjoy. She contends that young readers come not only to relish the structurally transgressive manipulations of the story but that, because they do so, they are better able to face the world at large. As children learn to handle the monsters and witches of Estes’s narrative fantasy, they learn to cope with the doubts and worries of childhood itself, and this proves key to the book’s longevity and continued popularity.

Checkmate: Linguistic and Literary Play in Salman Rushdie’s Haroun and the Sea of Storiesopens PDF file

The authors use Noam Chomsky’s theories about generative grammar to discuss the notion of linguistic creativity they believe lies at the core of storytelling as Salman Rushdie pictures it in his novel, Haroun and the Sea of Stories. The production of meaning through the use of narrative helps explain the rules of the literary game, presented in part as a fantasy chess match, for the young readers at whom the work is aimed.

Stuart Lester and Wendy Russell, Play for a Change: Play, Policy and Practice: A Review of Contemporary Perspectivesopens PDF file

Luciano L’Abate, The Praeger Handbook of Play across the Life Cycle: From Infancy to Old Ageopens PDF file

Michael A. Messner, It’s All for the Kids: Gender, Families, and Youth Sportsopens PDF file

Christiane Bongartz is Dean of the School of Arts and Humanities and Professor of English at the University of Cologne in Germany. She has taught at several American universities and lectured internationally on research related to language learning in bilingual settings. Her publications include Noun Combination in Interlanguage, Languages across Curriculum (cowritten and forthcoming), and numerous articles in anthologies and in journals such as the International Journal of English Studies, Modern Language Journal, and Southern Journal of Linguistics. She has also served on the boards of several scholarly organizations, including the European Second Language Association and Europaische Rechtslinguistik. Esther Gilman Richey is Associate Professor of English at the University of South Carolina. She specializes in Renaissance literature and culture and is the author of The Politics of Revelation in the English Renaissance. Her many articles have appeared in English Literary Renaissance, Studies in English Literature, Southern Journal of Linguistics, and Journal of English and Germanic Philology.

Elizabeth Gargano is Assistant Professor of English at the University of North Carolina, where her primary interests are Victorian literature and culture, children’s literature, the novel, and women’s literature and feminist theory. She is the author of Reading Victorian Schoolrooms: Childhood and Education in Nineteenth-Century Fiction and articles in Women’s Studies, Texas Studies in Literature and Language, Children’s Literature Association Quarterly, Children’s Literature, Studies in English Literature, and other journals. She received the Sara Henderson Hay Prize for Poetry and the Willow Review Annual Prize for Fiction and has presented papers at professional conferences on topics as diverse as video-game images of Iraq and linear and errant trains of thought in Charles Dickens’s Our Mutual Friend.