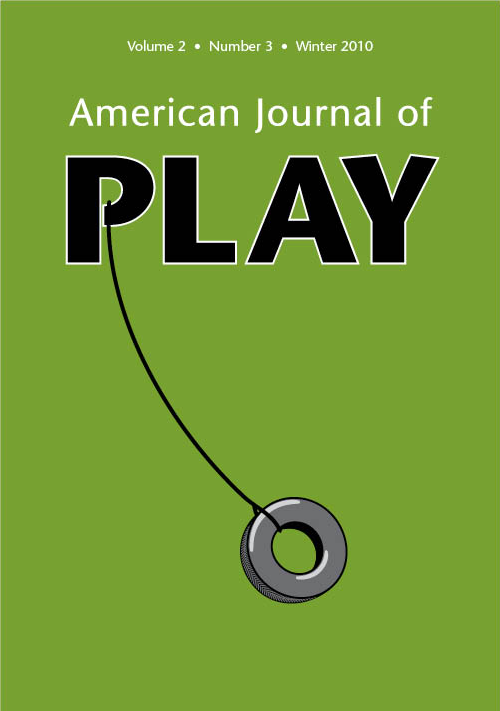 Welcome to the American Journal of Play special issue on the science of play, the first of a number of theme issues that will appear from time to time. Each will focus on an important topic in the fast-developing study of play. Each will be guest edited by a distinguished expert on the topic. And each will include work by the leading researchers and thinkers on the topic. In this issue, guest-editor Stephen M. Siviy has assembled a series of articles on the scientific study of play as pioneered by Jaak Panksepp (who is interviewed in the issue). These include a seminal article on laughing rats written by Panksepp and Jeffrey Burgdorf and reprinted here for ease of reference as a historical backdrop to the other pieces in this issue. They begin with an article written by Sergio M. Pellis, Vivien C. Pellis, and Heather C. Bell on the subcortical brain mechanisms involved in play. Our guest editor himself contributes a piece exploring the impact of fear and anxiety on play in laboratory animals. Louk J. M. J. Vanderschuren investigates how the brain makes play fun. And Gordon M. Burghardt reviews the growing information on play in species other than our own. A topic not without its controversy, the science of play has been reshaping the landscape for our understanding of play—where it comes from and how it affects us.

Science of the Brain as a Gateway to Understanding Play: An Interview with Jaak Panksepp

Jaak Panksepp, known best for his work on animal emotions and coining the term affective neuroscience, investigates the primary processes of brain and mind that enable and drive emotion. As an undergraduate, he briefly considered a career in electrical engineering but turned instead to psychology, which led to a 1969 University of Massachusetts PhD dissertation examining how electrical stimulation of brain regions affects aggressive behavior. Since then, Panksepp has written more than three hundred articles in scientific books and journals, along with the pathbreaking 1998 study Affective Neuroscience, in which he detailed the neurology, neuroanatomy, neurochemistry, and functions of the emotional brain. For Panksepp and his students, studying play in animals opens a window into what they and other thinkers have come to call the BrainMind or MindBrain. He discovered that rats chirp (“laugh”) during their rough-and-tumble bouts and that play deprivation is a potent motivator akin to thirst or hunger. Optimal brain development depends on healthy play experiences in early life, Panksepp contends, and he observes that over the long evolutionary haul, play has promoted social bonds and nourished social learning. Currently, Panksepp is Baily Endowed Chair of Animal Well-Being Science in the College of Veterinary Medicine at Washington State University; Distinguished Research Professor Emeritus of Psychobiology, Bowling Green State University; and Head, Affective Neuroscience Research, Falk Center for Molecular Therapeutics, Northwestern University. In this wide-ranging interview, Panksepp notes how play shaped his own experience, discusses his life’s work and the context within which he conducted it, and presses for greater recognition of the value of play in psychological research.

The Function of Play in the Development of the Social Brain

Rough-and-tumble play, or play fighting, is common in the young of many mammals. Research on play fighting among rats shows that there are many levels of neural control over this behavior: subcortical mechanisms mediate the motivation and behavior of such play, and the cortex provides mechanisms by which the play changes with age and context. The cortical mechanisms help to explain the advantages playing offers the brain. The cortically induced modulations of the content of play with age ensure that exposure to particular kinds of experiences are enhanced during the critical juvenile period. These experiences, in turn, modify the development of other areas of the cortex. Such cortical changes appear to mediate the effects of play on the refinement of social skills. As a result, rats that play as juveniles are more socially competent as adults. This work was supported by the Natural Sciences and Engineering Research Council of Canada and the Alberta Heritage Foundation for Medical Research.

Play and Adversity: How the Playful Mammalian Brain Withstands Threats and Anxieties

Most mammals play, but they do so in a dangerous world. The dynamic relationship between the stresses created by their world and the activity of play helps to explain the evolution of play in mammals, as the author demonstrates in evidence garnered from experiments that introduce elements of fear to rats at play. The author describes the resulting fearful behavior and quantifies the fluctuation in play that results, and then he investigates how these are modified by increased maternal care or the use of benzodiazepines. In conclusion, he discusses how such research can help shed light on the neurobiology underlying human anxiety disorders, especially in children.

How the Brain Makes Play Fun

In this article, the author describes the empirical studies that have investigated whether play (mostly social play) is rewarding. He then discusses the brain circuits and neurotransmitters that underlie the pleasurable aspects of play. He concludes that the pleasure of play has the ability to reinforce learning activities and that the brain’s neurotransmitters and the brain regions that are deeply involved in motivation and pleasure also mediate the pleasures and motivations that social play produces.

The Comparative Reach of Play and Brain: Perspective, Evidence, and Implications

Scholars interested in play in humans should take note of the growing literature on play in other species, especially in light of the application of evolutionary approaches to virtually all areas of psychology. Although most research on animal play deals with mammals—particularly rodents, carnivores, and primates—studies have recorded play of different types in a wide range of other animals, both vertebrate and even invertebrate, who differ greatly in their ecology, their behavior, and their nervous systems. How we characterize such diverse forms of play shapes how we pose research questions and evaluate evidence about play in all species, including humans. In this article, the author reviews the research about play across major taxonomic divisions and looks at the questions that arise when anthropocentric views of play are set aside in order to understand play more broadly. The author then considers how this knowledge illuminates the diversity of play among humans, whom he sees as on the edge of evolutionary change. The article concludes that an understanding of the evolutionary and comparative diversity of play may have implications for integrating play into education and into other attempts to solve ills in society.

In this reprint of a seminal article, once considered quite controversial, the authors discuss their radical claim that rats laugh. Even more provocative, the authors found that this rat-joy sound, especially evident during play, could be amplified dramatically by what they formally call heterospecific (cross-species) handplay (tickling). The authors tickled rats during the most playful juvenile period of their development (older rats sometimes resisted tickling), then studied the ultrasonic chirping the rats produced in response. When analyzed, these vocalizations, occurring during playful rough-and-tumble bouts, suggested analogies to human laughter. The authors also found that fear inhibits playfulness and precludes laughter in rats: sudden, startling bright lights and rough handling reduces the chirping, but even more than these, the smell of a predator’s urine suppresses rat “laughter.” The similar positive emotional responses evident in humans and rats suggests a shared brain anatomy and similar neurochemistry, which, in turn, suggests new ways to investigate the ancient origin of human laughter. This article was the first publication to summarize the full set of groundbreaking experiments that changed the way many researchers and scholars consider animal feelings, human nature, and the field of play.

Anthony D. Pelligrini, The Role of Play in Human Development

Stuart Brown, M.D., with Christopher Vaughan, Play: How It Shapes the Brain, Opens the Imagination, and Invigorates the Soul

David D. Hamlin, Work and Play: The Production and Consumption of Toys in Germany, 1870–1914 and Toys, Consumption, and Middle-Class Childhood in Imperial Germany, 1871–1918

Robin Gerber, Barbie and Ruth: The Story of the World's Most Famous Doll and the Woman Who Created Her

Mark I. West, ed., The Japanification of Children's Popular Culture: From Godzilla to Miyazaki

Gordon M. Burghardt is Alumni Distinguished Service Professor in the Departments of Psychology and Ecology and Evolutionary Biology at the University of Tennessee, where his primary research focuses on the relationship between genetics and early environments in the development of behavior patterns and sensory processes. He is the author of The Genesis of Animal Play: Testing the Limits and numerous scientific papers, editor of the Journal of Comparative Psychology, and a member of the editorial boards of four other journals. He has been a fellow at the American Psychological Association, American Psychological Society, Animal Behavior Society, and the American Association for the Advancement of Science.

Jaak Panksepp is distinguished Research Professor Emeritus of Psychology at Bowling Green State University, Baily Endowed Chair of Animal Well-Being Science at Washington State University’s College of Veterinary Medicine, and head of Affective Neuroscience Research at the Falk Center for Molecular Therapeutics at Northwestern University. He is editor of the Textbook of Biological Psychiatry and author of Affective Neuroscience: The Foundations of Human and Animal Emotions. In addition, he has written more than three hundred articles in the fields of psychology and affective neuroscience. Jeffrey Burgdorf is a Post-Doctoral Research Associate in the Department of Biomedical Engineering at the Falk Center for Molecular Therapeutics at Northwestern University. His numerous scientific papers have appeared in, among other places, Behavioral Neuroscience, Psychopharmacology, and Consciousness and Emotion.

Stephen M. Siviy is Chairperson of the Psychology Department at Gettysburg College. His primary research interest is in identifying neurobiolical substrates of mammalian playfulness. With more than twenty years of experience in the field, Siviy’s coauthored articles have appeared in, among others, Behavioural Brain Research, Neuroscience & Biobehavioral Reviews, Journal of Comparative Psychology, and Behavioral Neuroscience. Siviy also served as a postdoctoral fellow at the University of Sydney and the University of California, Los Angeles.

Louk J. M. J. Vanderschuren is Associate Professor at the Ruldolf Magnus Institute of Neuroscience of the University Medical Center Utrecht in the Netherlands. He investigates the neurobiology of social behavior, impulsivity, and addiction, and his many papers have appeared in publications such as Science, Nature Medicine, the Journal of Neuroscience, and Biological Psychiatry. He also serves as Associate Editor of Behavioural Phamacology, published in association with the European Behavioural Pharmacology Society.