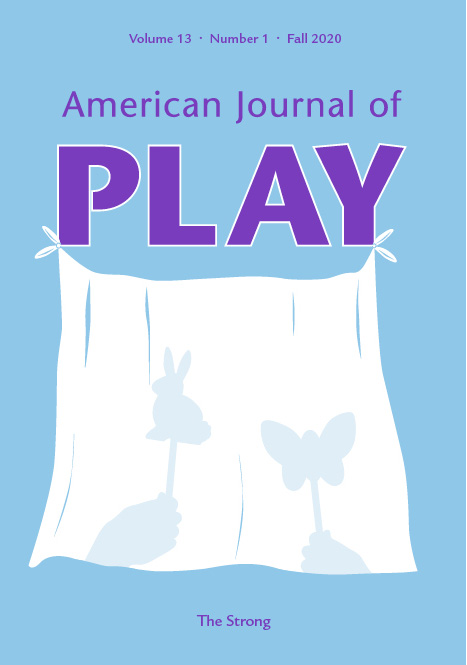 This issue of the American Journal of Play appears as the world continues to fight a global pandemic that has cost more than three million lives. As some of our authors and interviewees suggest, play has served an important role during the pandemic. Explorations of how we play and what play means to us remain as relevant as ever.

An interview with developmental psychologists and educators Kathy Hirsh- Pasek and Roberta Michnick Golinkoff opens the issue. They discuss playful learning and its relationship to raising and educating successful children in a century that will be characterized by rapid technological and labor force changes. In an interview with the curators of The Strong National Museum of Play, Christopher Bensch, Andrew Borman, Michelle Parnett-Dwyer, and Nicolas Ricketts discuss some of the ways in which play has changed during the pandemic and how the The Strong has sought to document and preserve stories and artifacts about play during this challenging time. Peter Gray draws on self-determination theory and surveys and studies conducted after the first two months of school lockdowns to suggest that, for many children, an increased time for play, increased opportunity to contribute constructively to family life, and increased family togetherness improved mental well-being during the early months of the pandemic. Angela Pyle, Martin A. Pyle, Jessica Prioletta, and Betül Alaca examine misalignments in research, public discourse, and classroom realities related to play-based learning. They suggest that a need exists to develop a broader understanding of play-based learning and its role in classrooms for media outlets and the stakeholders they influence. Video games have become a preferred form of play during the pandemic, and Patrick Markey, Christopher Ferguson, and Lauren Hopkins close the issue with a review of the current research about video game play. Focusing on the areas of social skills, obesity, mood management, visuospatial cognitive abilities, desensitization, violence, and aggression, the authors dispel common myths, consider the medium’s benefits, and conclude that playing video games can be a worthwhile activity for most children when balanced with life’s other responsibilities.

Playful Learning and Raising Successful Children in the Twenty-First Century: An Interview with Kathy Hirsh-Pasek and Roberta Michnick Golinkoff

Kathy Hirsh-Pasek is the Stanley and Debra Lefkowitz Faculty Fellow in the Department of Psychology at Temple University and a Senior Fellow at the Brookings Institution. She is the past president of the International Society for Infant Studies, served as the Associate Editor of Child Development and is on the governing counsel of the Society for Research in Child Development. In 2021 she was elected as a member of the National Academy of Education. She is on the advisory board for Nickelodeon, Vroom, the Boston Children’s Museum, Disney Junior, and Jumpstart. Her research examines the development of early language and literacy as well as the role of play in learning. Roberta Michnick Golinkoff is the Unidel H. Rodney Sharp Chair and professor in the School of Education at the University of Delaware. She also holds joint appointments in the Departments of Psychological and Brain Sciences and Linguistics and Cognitive Science. She founded and is the director of the Child’s Play, Learning, and Development Lab at the University of Delaware. Golinkoff is the Treasurer of the International Congress on Infant Studies and was an Associate Editor of Child Development. She consults for numerous organizations (e.g., Jumpstart, the Delaware Children’s Museums, and CHOICES for deaf children) and federal agencies. Her research focuses on language development, the benefits of play, and preschoolers’ early spatial knowledge. In 2021 she was elected as a member of the National Academy of Education. As long-time collaborators, Hirsh-Pasek and Golinkoff have authored fourteen books, including How Babies Talk: The Magic and Mystery of Language in the First Three Years, Einstein Never Used Flash Cards: How Our Children Really Learn—and Why They Need to Play More and Memorize Less, and Becoming Brilliant: What Science Tells Us about Raising Successful Children. Key words: 6 Cs; Learning Science Exchange (LSX); Playful Learning Landscapes; Quick Interactive Language Screener (QUILS)

Play and Curation During the COVID-19 Pandemic: An Interview with Christopher Bensch, Andrew Borman, Michelle Parnett-Dwyer, and Nicolas Ricketts

Christopher Bensch is vice president for collections and chief curator at The Strong National Museum of Play in Rochester, NY. He oversees the acquisition of and care for the world’s most comprehensive collection of playthings. He also serves as the primary spokesperson for the National Toy Hall of Fame. Andrew Borman is digital games curator at The Strong. He collects digital games and coordinates the museum’s digital game preservation efforts. Michelle Parnett-Dwyer is curator at The Strong. She collects and interprets a comprehensive collection of toys and dolls. Nic Ricketts is curator at The Strong. He acquires and interprets the museum’s collection of board games, puzzles, and other nonelectronic games, as well as photographs, art, and paper ephemera. In this interview, The Strong’s curators discuss the impact of the pandemic on play and the museum’s collecting and preservation efforts. Key words: distance play; electronic games and COVID-19; medicine and toys; play at home; play during a pandemic; toys and diversity; toy industry and pandemics; toy scarcity in a pandemic

How Children Coped in the First Months of the Pandemic Lockdown: Free Time, Play, Family Togetherness, and Helping Out at Home

During the first and second months after school lockdown in spring 2020, the author and others conducted surveys in the United States of children aged eight through thirteen and of parents with children the same ages. Contrary to many expectations, they found the children less anxious than they had been prior to the pandemic. The children were getting more sleep, were much more likely to report themselves as happy than sad, were using their free time to discover and engage in new, self-chosen activities, were helping out at home, were enjoying the extra time with their family, and were gaining new respect and appreciation from their parents. The author concludes that these findings, along with findings from other studies early in the pandemic, suggest an increased time for play, an increased opportunity to contribute constructively to family life, and an increased family togetherness improved the mental well-being of many children during at least the first months of the pandemic. He discusses these results in relation to Self-Determination Theory, which posits that psychological well-being depends upon satisfaction of basic needs for autonomy, competence, and relatedness, all of which may have been satisfied to a greater extent after lockdown than before. Key words: children’s initiative; children’s resilience; coping with stress; COVID- 19; family togetherness; pandemic school lockdown; play and mental health; Self-Determination Theory

Policy makers around the world increasingly mandate play-based learning in kindergarten classrooms, a pedagogical approach backed by research espousing not only the developmental appropriateness of play-based learning for this age group but also the benefits to students’ academic achievement. Despite these mandates, researchers continue to see a discrepancy between policy and practice. Using the lens of institutional theory, the authors reviewed the issue and discovered that, although free play seems ubiquitous, teacher involvement in play—often fundamental for academic learning—fails to occur in approximately half of the classrooms studied. The researchers found evidence of an entrenched and limited definition of play as being child directed, a definition perpetuated by media depictions. These findings have direct implications for teaching practice, suggesting a need to develop a broader understanding of play-based learning and its role in classrooms for media outlets and the stakeholders they influence. Key words: institutional theory; media and education; play-based learning; teacher perceptions; teacher practice

Jennifer S. Light, States of Childhood: From the Junior Republic to the American Republic, 1895–1945

Jacky Kilvington and Ali Wood, Reflective Playwork: For All Who Work with Children

Peter Gray is Research Professor of Psychology and Neuroscience at Boston College. He is the author of Free to Learn: Why Unleashing the Instinct to Play Will Make Our Children Happier, More Self-Reliant, and Better Students for Life, eight editions of the textbook Psychology (with coauthor David Bjorklund on the most recent two editions), and numerous articles on play, behavioral biology, evolutionary psychology, and education. Gray is a founding member of the nonprofit Alliance for Self-Directed Education and the nonprofit Let Grow. He also writes the Freedom to Learn blog for Psychology Today.

Patrick M. Markey is Professor of Psychology and Brain Sciences at Villanova University and a former president of the Society for Interpersonal Theory and Research. His research about interpersonal interactions and media often garners media attention, and he has been featured or interviewed by the New York Times, Rolling Stone, USA Today, 20/20, CNN, Fox News, ABC, NPR, BBC, PBS, The Economist, US News and World Report, MTV, ABC News, Time Magazine, and the Washington Post. He is also the coauthor of Moral Combat: Why the War on Violent Video Games Is Wrong and F*ck Divorce: A Science Based Guide to Piecing Yourself Back Together after Your Life Implodes. Christopher J. Ferguson is Professor of Psychology at Stetson University. His work on media and gun violence has been published in such anthologies and periodicals as Perspectives on Psychological Science, Journal of Communication, International Journal of Mental Health and Addiction, and Personality and Individual Differences. In addition to Moral Combat, which he coauthored, his books include How Madness Shaped History and Suicide Kings, a mystery novel. Lauren Hopkins is a graduate student at Villanova University whose research covers video games, prejudice, and interpersonal relationships.

Angela Pyle is an Associate Professor at the University of Toronto in the Dr. Eric Jackman Institute of Child Study. She has studied the development of personal, social, and academic skills by young children through play-based learning and her publications appear in such journals as American Educational Research Journal, Elementary School Journal, and Teachers College Record. Martin A. Pyle is an Assistant Professor at Ryerson University in the Ted Rogers School of Management and his publications, concerning the information sources individuals use to guide their choices and decision, appear in various marketing journals. Jessica Prioletta is an Assistant Professor at Bishop’s University in the School of Education and her work, published in such journals such as Contemporary Issues in Early Childhood and Early Childhood Education Journal, examines gender inequalities in early childhood education, especially in children’s play. Betül Alaca is a doctoral candidate in School and Clinical Child Psychology at the Ontario Institute for Studies in Education at University of Toronto.