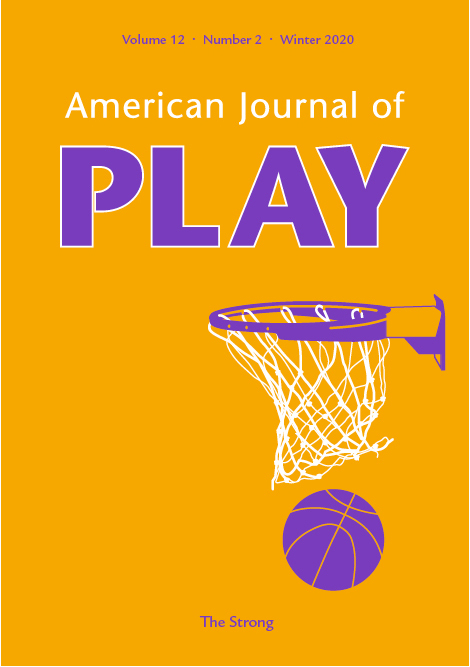 This issue of the American Journal of Play goes to press amid a global pandemic that has changed the ways in which many of us and our families and friends play. It is fitting then that we take this opportunity to acknowledge play’s critical role in challenging times and to thank our subscribers, readers, and authors for their continued support.

An interview with the distinguished sociologist T. L.Taylor opens the issue. She discusses various kinds of digital and online play, including her foundational work tracing the rise of massive multiplayer online games (MMOGs), esports, and game live streaming. In an article adapted from Thomas S. Henricks’s new book Play: A Basic Pathway to the Self (published by The Strong in 2020), he examines the history of play studies and the thinkers, philosophers, scholars, and practitioners who led to the creation of the discipline. Alejandra Wah draws on evolutionary theory to explore which cognitive processes underlie the capacities to play and to pretend play in human and nonhuman animals. Garry Chick, René Proyer, Andrew Purrington, and Careen Yarnal discuss being playful, having a good sense of humor, and being fun loving in relationship to assortative mating or the tendency of individuals to mate with phenotypically similar at rates greater than chance. Thomas Enemark Lundtofte closes the issue with a review of the research and scholarly literature about young children’s play with tablet computers.

T. L.Taylor is Professor of Comparative Media Studies at Massachusetts Institute of Technology (MIT) and cofounder and Director of Research for AnyKey, an organization dedicated to supporting and developing fair and inclusive esports. She is a qualitative sociologist who has focused on internet and game studies for over two decades, and her research explores the relations between culture and technology in online leisure environments. Her Watch Me Play: Twitch and the Rise of Game Live Streaming (2018), which chronicled the emerging media space of online game broadcasting, won the 2019 American Sociological Association’s Communication, Information Technologies, and Media Sociology book award. She is also the author of Raising the Stakes: E-Sports and the Professionalization of Computer Gaming (2012) and Play between Worlds: Exploring Online Game Culture (2006), and coauthor of Ethnography and Virtual Worlds: A Handbook of Method (2012). Key words: assemblage; coconstruction; esports; Everquest; live streaming; MMOG; professional gaming; Twitch; video games

In an article adapted from his latest work, Play: A Basic Pathway to the Self, published by The Strong in 2020, the author offers a wide-ranging review of play studies—and the thinkers, philosophers, and scholars who led to the creation of the discipline. He also reviews and seeks to explain for both specialists and more general readers the great diversity of play itself, which he ultimately considers a “pathway of experience” that resembles other such pathways as ritual, work, and what he calls communitas. Key words: communitas, play, play scholarship, play studies, play theory, ritual, work

Drawing on evolutionary theory, the author questions which cognitive processes underlie the capacities to play and to pretend play and the degree to which they are present in both humans and nonhuman animals. Considering cognitive capacities not all-or-nothing phenomena, she argues they are present in varying degrees in a wide range of species. Recognizing the risks involved in comparative studies, she identifies the unique features of cognition underlying pretend play while describing the broader phylogenetic sources from which they come. In the end, she finds, although play based on particular degrees of memory, perception, and consciousness can be found in many species, pretend play depends on distinctive degrees of memory, imagination, and metacognition—a cognitive process she calls “reflective imagination”—and appears characteristically human. Keywords: consciousness; imagination; memory; metacognition; perception; play; pretend play; reflective imagination

Do Birds of a Playful Feather Flock Together?: Playfulness and Assortative Mating

The authors discuss assortative mating, the tendency—important for increased genetic variation—of individuals to mate with the phenotypically similar at rates greater than chance. Influenced by many factors—physical characteristics like height and weight and demographic elements like behavior and attitudes, economic status and education, church attendance and ethnic identity, politics and personality—assortative mating has been considered with regard to having a good sense of humor but never to being playful or being fun loving. Based on a study of 254 undergraduates, the authors examine how these variables correlate with the search for desirable mates by adults and suggest the variables are indeed subject to assortative mating. Key words: assortative mating, fun loving, mate choice, playfulness, sense of humor, social homogamy

Pasi Sahlberg and William Doyle, Let the Children Play: How More Play Will Save Our Schools and Help Children Thrive

René Reinhold Schallegger, The Postmodern Joy of Role-Playing Games: Agency, Ritual, and Meaning in the Medium

Jaroslav Svelch, Gaming the Iron Curtain: How Teenagers and Amateurs in Communist Czechoslovakia Claimed the Medium of Computer Games

Garry Chick is Professor Emeritus in the Department of Recreation, Park, and Tourism Management at the Pennsylvania State University. His research focuses on cultural and evolutionary aspects of play, games, and leisure. His publications for scholarly journals include “Leisure and Cultural Complexity,” “Cultural Consonance in a Mexican Festival System,” and “What is Play For? Sexual Selection and the Evolution of Play.” René Proyer is Professor of Psychological Assessment and Differential Psychology at the Department of Psychology at the Martin Luther University Halle-Wittenberg in Germany. His interests include the study of playfulness as a personality trait and humor-related variables. His publications include edited special issues on “A Multidisciplinary Perspective on Play and Playfulness in Adults” and “Humor and Laughter Playfulness and Cheerfulness: Upsides and Downsides to a Life of Lightness.” Andrew Purrington is currently an instructor at Douglas College in British Columbia. His research focuses on culture and decision making in leisure and play. His publications include “Influence of Loss Aversion on Mountain Bikers’ Behavioral Intentions,” “Play and Mate Preference: Testing the Signal Theory of Adult Playfulness,” “Leisure as a Cross-Cultural Concept,” and “The Concept of Leisure Cross-Culturally.” Careen Yarnal is Associate Professor (Emerita) of Recreation, Park, and Tourism Management at The Pennsylvania State University. She has a broad repertoire of research interests, including positive emotions, stress and leisure coping, play, healthy aging, and the role of leisure across the lifespan. Her publications include “Egg White or Sun-Kissed: A Cross-Cultural Exploration of Skin Color and Women’s Leisure Behavior,” “Borrowing Happiness from the Future”: Exploring College Students’ Own Experiences on Health-Related Lifestyles”; “Using Playfulness to Cope with Psychological Stress: Taking into Account both Positive and Negative Emotions”; and “The Red Hat Society: Exploring the Role of Play, Liminality, and Communitas in Older Women’s Lives.”

Author most recently of Play: A Basic Pathway to the Self, Thomas S. Henricks has now retired as the J. Earl Danieley Professor of Sociology and Distinguished University Professor at Elon University, where he also served as dean of the social sciences department and associate dean of the university, from 1977 to 2018. In 1990, he received the University’s Daniels-Danieley Award for Excellence in Teaching. In fall 2003, Henricks was named Distinguished University Professor. Throughout his career Henricks’s research focused on social theory, modernization and change, popular culture, social stratification, race and ethnic relations, and the sociology of play, games, and sport. His publications include Play and the Human Condition; Disputed Pleasures: Sport and Society in Preindustrial England; Play Reconsidered: Sociological Perspectives on Human Expression; and Selves, Societies, and Emotions: Understanding the Pathways of Experience.

Thomas Enemark Lundtofte is Assistant Professor of Media Studies at University of Southern Denmark. His current research interests include the field of children, youth, and media, focusing on factors that condition modes of participation in children’s uses of digital media in schools and in private settings. He serves on the national Danish research council for pedagogical IT under the Ministry of Children and Education. His research has been published in international journals and research anthologies.

Alejandra Wah is Assistant Professor of Arts and Cognition in the Department of Arts, Culture, and Media Studies at the University of Groningen, the Netherlands. Her research focuses on the evolution and development of reflective imagination and has been supported by grants from the National Autonomous University of Mexico, the Mexican National Fund for the Culture and the Arts, the Jumex Foundation, the Dutch Ministry of Education, Culture and Science, and the Royal Netherlands Academy of Arts and Sciences.