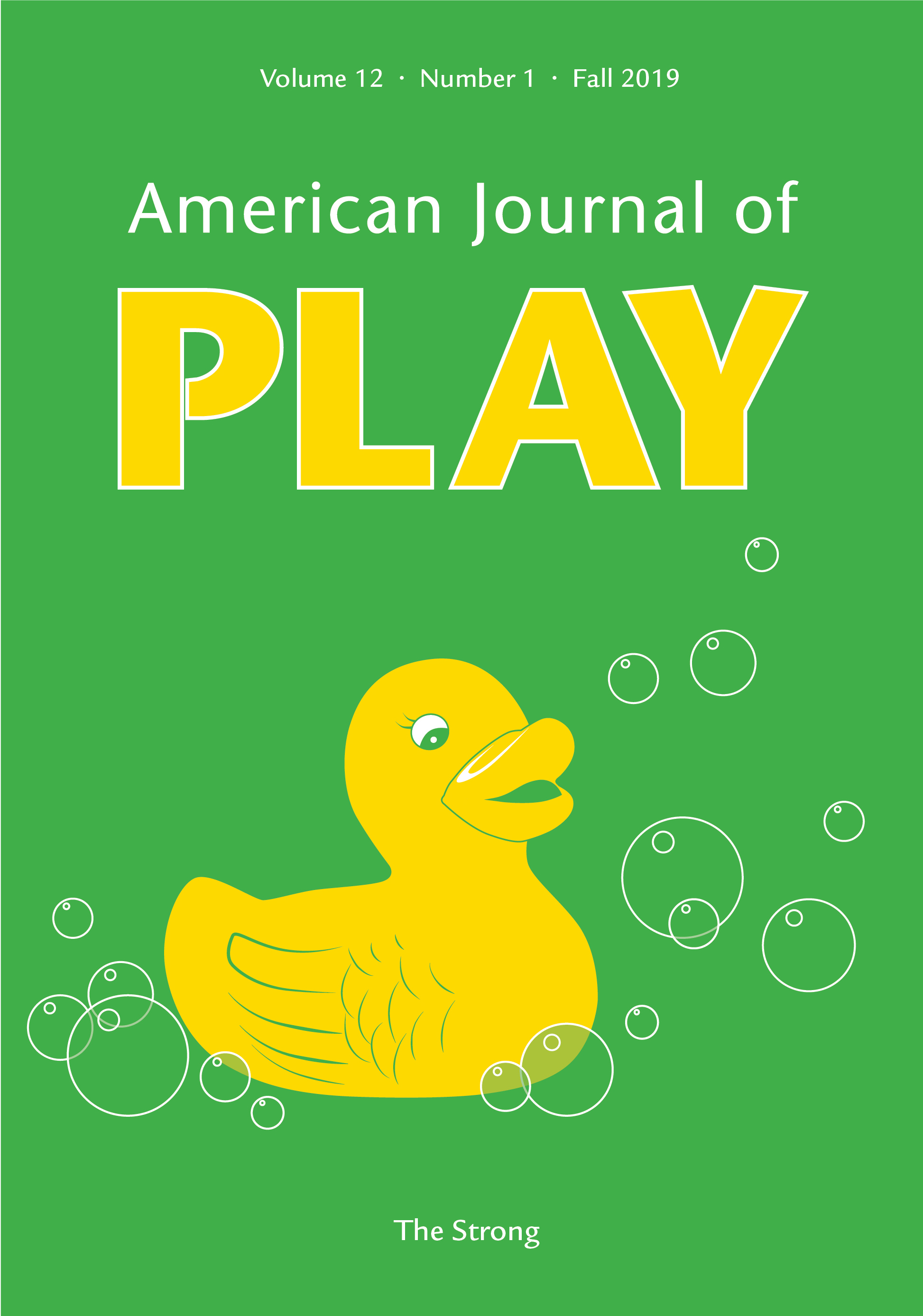 On November 10, 1969, the Public Broadcasting Service (PBS) launched Sesame Street, an ambitious educational experiment with the goal of using television to prepare children, particularly disadvantaged ones, for school. Decades of research have demonstrated its educational impact, and the show’s plots, parodies, and whimsical characters have inspired countless opportunities to play. Half a century later, Sesame Street is an enduring success.

In recognition of the fiftieth anniversary of this iconic, idealistic, and playful television show, the American Journal of Play welcomes you to its special issue on Sesame Street and learning through play. Working with Rosemarie T. Truglio, senior vice president of curriculum and content, and the team at Sesame Workshop, we have assembled a series of articles that explore playful learning. We begin with a wide-ranging interview with Rosemarie Truglio herself. Sesame Workshop’s Kim Foulds and Abigail Bucuvalas contribute a piece that analyzes the findings of a play-based pilot program in India, Mexico, and South Africa designed to change care givers’ perceptions about play and to empower them to guide children in learning through play. Elena Bodrova and Deborah J. Leong draw on the work of Lev Vygotsky and the Tools of Mind curriculum to demonstrate the importance of children’s make-believe play and how Sesame Workshop television shows aid care givers and teachers with helping children develop mature make-believe play. Rachel M. Flynn, Rebekah A. Richert, and Ellen A. Wartella explore the impact of digital games on the lives and play of children through the lens of Sesame Street’s express mission to help children become smarter, stronger, and kinder. And Erica S. Weisgram closes the issue with an examination of gender differences in children’s play and how Sesame Street promotes gender equity and strives to reduce gender stereotyping. Taken together, these articles explore Sesame Street’s impact on how children play and learn.

Sesame Street and Learning through Play: An Interview with Rosemarie T. Truglio

Rosemarie T. Truglio is the senior vice president of curriculum and content at Sesame Workshop, where she is responsible for the development of the interdisciplinary curriculum on which Sesame Street is based, and oversees content development across platforms such as television, publishing, toys, home video, and theme park activities. She also oversees the curriculum development for all new show production, including Esme and Roy, a series about learning through play, airing on HBO and PBS, and two shows on Apple TV’s Ghostwriter, a reimagined version of a workshop series with a literature focus from the 1990s and Helpsters, whose characters love to solve problems using fundamental coding skills. Before joining Sesame Workshop in 1997, Truglio was an Assistant Professor of Communication and Education at Teachers College, Columbia University. In addition to numerous articles in child and developmental psychology journals, she is the author of Ready for School! A Parent’s Guide to Playful Learning for Children Ages 2 to 5 (2019) and coeditor of G is for Growing: Thirty Years of Research on Children and Sesame Street (2001). She currently serves on the advisory boards of the Child Trends News Service; Read Alliance; The Ultimate Block Party; and The Toy Association Diversity and Inclusion Committee. She previously served on the National Advisory Child Health and Human Development Council (NICHD), the LEGO Foundation Research and Innovation Network, and the PBS KIDS Next Generation Media, among others. She received distinguished alumni awards from Douglass College (2005), University of Kansas (2013), Rutgers University (2014), and the University of Kansas Women’s Hall of Fame (2015). Key words: preschool television programs; Sesame Street; Sesame Workshop; Whole Child curriculum

Playing Every Day on Sesame Street: Global Learnings from a Play-Based Pilot Intervention in India, Mexico, and South Africa

Research has shown that playful learning helps foster the development of young children. Adult guidance of this play in meaningful ways can unlock the transformative power of education. Lack of knowledge about guided play, however, often leads to children growing up without opportunities to learn through play. Considering this, the authors analyze findings from the pilot phases of Play Every Day, an intervention based in urban communities in India, Mexico, and South Africa. This program is designed to shift the perceptions of care givers about play and its relationship to child development and to allow them to guide children in learning through play. The authors describe the program’s intent to contribute to global knowledge of best practices for promoting playful learning. They discuss developing a global framework and contextualizing its delivery to empower care givers as ambassadors of learning through play in young children’s lives. Key words: guided play; Play Every Day project; play in India; play in Mexico; play in South Africa; scaffolding play; Sesame Workshop

Making Play Smarter, Stronger, and Kinder: Lessons from Tools of the Mind

Although most early-childhood educators agree on the value of play in child development, they find it increasingly harder to advocate for play given today’s pressure for academic achievement. Using the theoretical work of Lev Vygotsky, the authors discuss how make-believe play among children helps them develop skills critical for success in school and beyond. They discuss the strategies of the Tools of the Mind curriculum that scaffold mature make-believe play, and they demonstrate how Sesame Street and Esme and Roy, shows from Sesame Workshop, help parents and teachers use these strategies with children. Key words: early-childhood education; emotion control; make-believe play; self-regulation; sociodramatic play; symbolic thought; Vygotsky’s theory

Play in a Digital World: How Interactive Digital Games Shape the Lives of Children

The authors discuss the impact of interactive digital games on the lives and the play of young children in terms of Sesame Street’s express mission to help children become smarter, stronger, and kinder. They conclude that such games have much the same effect as other types of play and call for more research to help use it. Key words: digital play; electronic games and child development; play and digital devices; Sesame Street; smarter, stronger, kinder

Reducing Gender Stereotypes in Toys and Play for Smarter, Stronger, and Kinder Kids

The author discusses gender differences in children’s play and its relation to the programs of Sesame Street, which for fifty years has sought to enhance children’s physical, cognitive, and social development through playful learning. Gender differences in children’s play, she asserts, are vast, and she notes that, consequently, boys and girls may develop different skills and learn different concepts through their play. Given this, Sesame Street remains committed to gender equity and opposed to gender stereotypes and seeks to prevent the development of and reduce the endorsement of these stereotypes among young children, especially in their play. Key words: gender equity; gender schema; gender stereotypes; gender-typed play; gender-typed toys; Sesame Street

James Geary, Wit’s End: What Wit Is, How It Works, and Why We Need It

Anthony M. Bean, ed., The Psychology of Zelda: Linking Our World to The Legend of Zelda Series

Matthew Thomas Payne and Nina B. Huntemann, eds., How to Play Video Games

Elena Bodrova is currently the Knowledge Advisor at Tools of the Mind. She has worked on applying Lev Vygotsky’s theory to education at Russia’s Institute for Preschool Education and in the United States at the Metropolitan State University of Denver. Bodrova is the author of multiple articles and book chapters on early literacy, assessment, play, and self-regulation. She is a coauthor of Tools of the Mind: The Vygotskian Approach to Early Childhood Education; Assessing and Guiding Young Children’s Development and Learning; and Basics of Assessment: A Primer for Early Childhood Professionals.Deborah Leong is cofounder and president of Tools of the Mind. She is professor emerita of Developmental and Educational Psychology at Metropolitan State University. She developed Tools of the Mind with Elena Bodrova. She has coauthored numerous articles, books, and videos on play, the Vygotskian approach to education, self-regulation and executive functions development in preschool and kindergarten, and assessment and measurement in the early-childhood classroom. She worked as a consultant for Sesame Street, and she was a Fulbright Scholar at the Universidad de Patagonia in Argentina.

Rachel M. Flynn is a Research Assistant Professor in the Department of Medical Social Sciences at Northwestern University. Her primary research examines media’s impact on children’s cognitive development. Her publications include “Cognitive Development and Gaming in the Digital Age”; “Children’s Attention to Screen-based Pedagogical Supports: An Eye-tracking Study with Low-income Preschool Children in the United States”; “Cognitive, Not Physical, Engagement in Videogaming Influences Executive Functioning”; and” Parents Support Preschoolers’ Use of a Novel Interactive Device.” Rebekah A. Richert is an Associate Professor of Psychology at University of California, Riverside. She examines how the fantastical content and characters in children’s media can both support and hinder children’s learning from books, videos, and interactive games. Her publications include “Media as Social Partners: The Social Nature of Young Children’s Learning from Screen Media”; “The Role of Fantasy- Reality Distinctions in Preschoolers’ Learning from Educational Programs”; “US Preschoolers’ Trust of and Learning from Media Characters”; and “Word Learning from Baby Videos.” Ellen A. Wartella is the Al-thani Professor of Communication Studies, and Director of the Center on Media and Human Development at Northwestern University. She currently edits Social Policy Reports for the Society for Research in Child Development. Her publications include “Factors Influencing Digital Technology Use in Early Childhood Education”; “Media and the Well-Being of Children and Adolescents”; “Babies, Television, and Videos: How Did We Get Here?”; and “Digital Technology and Families.”

Kim Foulds is the Senior Director of International Research & Evaluation at Sesame Workshop. She oversees research and evaluation on Sesame Workshop’s international coproductions and community engagement interventions. Her scholarship has been published in International Journal of Educational Development; Gender and Education; Development in Practice; Gender, Place, and Culture; Studies in Social Justice; The Conversation Africa; Education as Change; and International Higher Education. Abigail Bucuvalas is Senior Director of Educational Programs in the International Social Impact Department at Sesame Workshop where she leads the department’s education team, overseeing curriculum development, creation of multimedia teaching and learning materials, and intervention design for Sesame’s international early education, health, and humanitarian response programming. Prior to joining Sesame Workshop, Bucuvalas collaborated on health research in the United States and overseas.

Erica S. Weisgram is a Professor of Developmental Psychology at University of Wisconsin-Stevens Point where she leads the Gender Development Research Lab. Her publications include Gender Typing of Children’s Toys: How Early Play Experiences Impact Development, “Predictors of Gender-Typed Toy Purchases by Mothers and Nonparents”; “Gender Typing of Toys in Historical and Contemporary Contexts”; and “The Cognitive Construction of Gender Stereotypes: Evidence for the Dual Pathways Model of Gender Differentiation.”