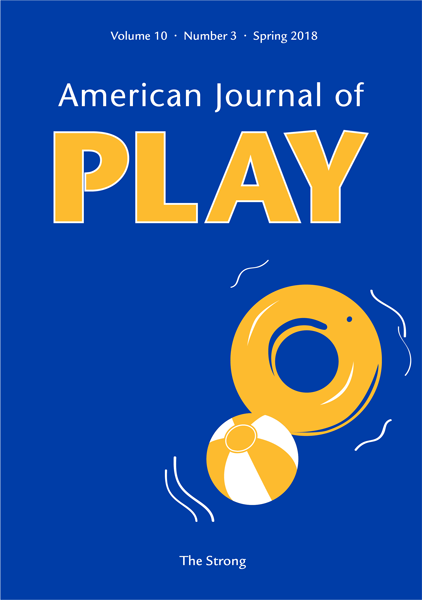 The author proposes a rhetoric of computational play as a perspective for the analysis of the ludic in the Information Age. Combining concepts from the philosophy of information and postphenomenology with different theories of play, he argues that there is a play element shaping the cultural impact of computational media and that this kind of play is experienced as either sub-mission or resistance to the pleasures of computation. Both kind of experiences help develop new forms of understanding and create the cultures of the Information Age. Key words: computational media; digital play; philosophy of information; postphenomenology

Beyond the Ludic Lover: Individual Differences in Playfulness and Love Styles in Heterosexual Relationshipsopens PDF file

Adult playfulness contributes to well-functioning romantic relationships, claim the authors, who study the association between playfulness of several kinds (other directed, lighthearted, intellectual, whimsical) and six specific attitudes towards love they call love styles—eros, ludus, storge, pragma, mania and agape. To do so, they engaged seventy-seven heterosexual couples to rate the love styles against a checklist for playful behaviors in romantic relation-ships the authors call the Playful Love Checklist (PLC). The authors then ana-lyzed the responses for similarities and robust associations, either negative or positive, between partners for their views on playfulness in love relationships. Their findings suggest, among other things, that current conceptualizations of playfulness do not much overlap with what other researchers have called the ludic lover, and the authors’ analysis of self-ratings and partner ratings contributes to our understanding of the association between playfulness and love styles. Key words: adult playfulness; love; love styles; ludus; playfulness; romantic relationships

Children have a natural inclination to play and imagine themselves as char-acters. Research has supported theories that connect this pretend play and related theatrical play to the development of children’s social and emotional skills, but the author contends we need further, more rigorous research on whether such play directly relates to such positive outcomes. The author developed a cohesive pretend play intervention to conduct such research, using block play and story time as controls to distinguish what may be uniquely useful about pretense. She seeks to provide researchers and prac-titioners who work with children a model for creating guided-play activi-ties. She also discusses how to train play leaders and handle the issues that arise in the implementation of these pretend play interventions. Keywords: interventions, pretend play, sociodramatic play, theatrical play

As the popularity of video games has risen so too has the worry about the problems associated with playing them. The authors review the research concerning problem gaming, its similarity to some clinical addictions like gambling and drug and alcohol abuse, and current treatment options. They conclude that, regardless of how researchers and medical professionals assess the nature of a gaming disorder, few who play video games experience negative consequences from doing so and, at best, only a small subset of players might be considered to suffer from an addiction to it. Keywords: addiction; internet gaming disorder; problem gaming; video games

The growing interest in addressing the mental health needs of Chinese children through play therapy calls for an understanding of the cultural roots and norms of Chinese families. To help professionals succeed in this traditionally Western treatmen when providing cross-cultural play therapy, the authors make recommendations concerning the location and appearance of the play therapy facility, including its waiting room and playroom. They discuss the need for carefully introducing play therapy to Chinese parents and suggest Western and Chinese toys and play items that are therapeutically appropriate for Chinese children. The authors also propose an outdoor play area based on the therapeutic rationales of contemporary neuropsychology. With this culturally sensitive discussion, the authors seek more effective play therapy not only for the children living in Chinese societies—mainland China, Hong Kong, and Taiwan—but also in countries with major Chinese child populations. Key words: outdoor play; physical settings for play; play and Chinese children; play and neuropsychology; play therapy; toys and Chinese children

Douglas A. Gentile is Professor of Psychology at Iowa State University. He has authored articles on both the positive and negative effects of media on children. His books include Media Violence and Children and Violent Video Game Effects on Children and Adolescents: Theory, Research, and Public Policy. C. Shawn Green is an Associate Professor of Psychology at the University of Wisconsin-Madison and an Associate Editor at the Journal of Cognitive Enhancement. Green is the author of articles on the impact of modern technologies, and his work has also appeared in Netflix’s Bill Nye Saves the World, Wired magazine, Scientific American, the New York Times, and National Public Radio (NPR). Thomas E. Gorman is a graduate student in psychology and cognitive science at the Uni-versity of Indiana. He has conducted and published several studies on the impact of new media on human behavior and on problem gaming.

Thalia R. Goldstein is Assistant Professor of Applied Development Psychology and the director of the Social Skills, Imagination, and Theatre Laboratory at George Mason University. She has published works in such journals as Child Development, Trends in Cognitive Science, and Developmental Science. She is coauthor of the book Art for Art’s Sake.

Yih-Jiun Shen is Professor in the Department of Counseling at The University of Texas Rio Grande Valley. Her work on cross-culturally related issues in play therapy, school counseling, and counselor education appears in the International Journal of Play Therapy, Journal of Creativity in Mental Health, and Professional School Counseling. Sylvia Z. Ramirez retired as Professor from the University of Texas-Pan American, and her work on fears and anxiety in individuals with intellectual disabilities and multicultural issues in education and psychology appears in the Journal of School Psychology, Journal of Developmental and Physical Disabilities, and Behavioral Assessment. Peter Kranz is Professor in Counseling at the University of Texas Rio Grande Valley. He is the author and coauthor of numerous publications that have appeared in such journals as Perception of Cultural Competence in Nurse Practitioners, Journal of Nursing and Health Science, and Journal of Hispanic Higher Education. Xinhua Tao is Associate Professor of Psychology and the director of the student counseling center at Soochow University. His work appears in such journals as Advances in Psychological Science and Psychosocial Science. Yuanhong Ji is Professor of Graduate School of Human Science and the director of the Ritsumeikan Coun-seling Center at Ritsumeikan University. Her work appears in such journals as Japanese Bulletin of Arts Therapy, Journal of Japanese Clinical Psychology, and The Arts in Psychotherapy.