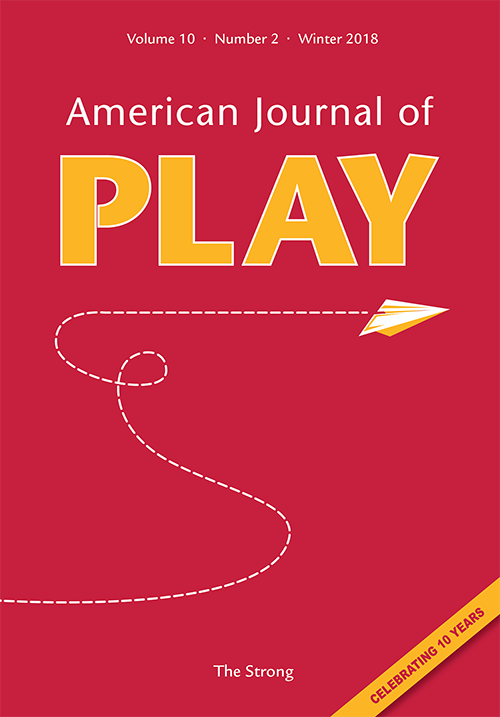 The year 2018 marks the tenth anniversary of the American Journal of Play. The Strong founded the Journal with the aims of increasing awareness and understanding of the role of play in learning and human development and the ways in which play illuminates our cultural history. Our hope, too, was to provide seemingly disparate communities of scholars studying all aspects of play with a forum to share and exchange their ideas with not only specialists in their own fields, but also with a wider audience of researchers, educators, policymakers, and readers. A decade later, the Journal continues to meet these aims by pub-lishing new research and significant scholarship, including hundreds of articles, interviews, and book reviews for readers and contributors from more than fifty countries around the world.

Over the last decade, the Journal has acted as a forum for play scholars from a wide variety of fields such as psychology, history, sociology, education, cul-tural studies, anthropology, neuroscience, museum studies, English, philosophy, public health, digital humanities, game studies, and many more. And through special themed issues, we have also highlighted emerging fields and important new findings in areas such as the science of play, play in children’s literature, free play, pretend play, cognitive neuroaesthetics, the interpersonal neurobiology of play, play in the ancient world, and the new video game history.

None of this would have been possible without the support and efforts of The Strong and its board of trustees, the Journal’s founding editors, all those who have served on our editorial staff, members of the editorial board, guest editors, contributors, interviewees, reviewers, and readers. We hope the next decade proves as much fun—and as enlightening for the study of play—as the last one.

The author counters the common descriptions of play as endlessly diverse, ambiguous, and even paradoxical by describing it as a fundamental experience comparable to three others—ritual, work, and communitas. Play, he argues, entails a distinctive strategy of selfrealization and a strategy for liv-ing. He first examines four basic types of play—exploration, construction, interpretation, and dialogue—and links them respectively to four patterns of self-location: marginality, privilege, subordination, and engagement.  He then discusses the character and implications of the four kinds of play and evaluates a profoundly important variation in all play—that between its orderly, cooperative expression and its disorderly, oppositional articulation. Calling the first “green play” and the second “red play,” the author asserts that both are pertinent to all four kinds of play and that both have important implications for self-realization.  Key words: communitas; green play; patterns of self-location; red play; ritual; self-realization; types of play; work and play

The author discusses Magic: The Gathering as not only a card game but as situated in New Literacies as a Discourse and community of practice with rich, complex, and multimodal literacy practices. She describes apprenticeship to the game from the perspective of a novice and a long-time player and argues that entering its Magic Discourse depends on the requisite vocabulary, multimodal texts, and embodied literacy practices. She discusses the game in relation both to literacy and to play and reviews relevant theory and research, giving concrete examples from her own experience. The author describes the game as a rich, complex literacy tool that can foster important literacy practices in its players. Key words: card games; literacy; Magic: The Gathering; New Literacies

The authors ask if participating in an early-childhood theater production improves pretend play and cooperation among preschoolers.  They examined play sessions immediately before and after productions of interactive early-childhood performances at Imagination Stage, Inc. and measured children’s engagement, cooperation, pretense, and misbehavior.  They found that participating in the performances enhanced the cooperation and pretense of preschoolers. The authors discuss their results in relation to the role of the arts and of play in early creativity and social-competence development. Key words: cooperation; creativity; early-childhood development and the arts; make-believe; pretense; social competence

Game historians usually trace the literary roots of role-playing games to J. R. R. Tolkien and other fantasy authors. In this article, the author argues that, although Tolkien indeed provided pioneer game creators with specific content, historians have missed the important early influence on game history of children’s literature that advocates and illustrates role playing. Game scholars nod to such child’s play as make-believe and playground games, they often cite accounts of personal experiences in the childhood play of game designers, and they credit game books as an interactive link to fiction, but they have not included children’s texts in their histories. The author argues for placing children’s novels in such histories, particularly Zilpha Keatley Snyder’s The Egypt Game, which this article describes in full as a cultural forerunner in the history of role-playing games like Dungeons & Dragons. Keywords: games and play; game history; role playing; The Egypt Game

Tristan Donovan, It’s All a Game: The History of Board Games from Monopoly to Settlers of Catanopens PDF file

Cathy A. Malchiodi and David A. Crenshaw, eds., What to Do When Children Clam Up in Psychotherapy: Interventions to Facilitate Communicationopens PDF file

Autumn M. Dodge is Assistant Professor of Language and Literacy at Lynchburg College. Her work has appeared in academic journals and books, including Educating through Popular Culture: You’re Not Cool Just Because You Teach with Comics; Addressing Diversity in Literacy Instruction, Literacy Research, Practice, and Evaluation; Intercultural Education; Journal of Adolescent and Adult Literacy; and Distance Learning. Paul A. Crutcher is Assistant Professor of English and Director of English Education at University of Arkansas at Little Rock. His research, which focuses on popular culture, education, and social issues related to education, has appeared in numerous academic journals and books, including Intercultural Education, Educational Review, Journal of Adolescent and Adult Literacy, and International Journal of Comic Art.

Thomas S. Henricks is the J. Earl Danieley Professor of Sociology and Distin-guished University Professor at Elon University. He established the program for sociology majors and developed the Faculty Resource Center at Elon. He also served as dean of the social sciences department and associate dean of the university. His publications include Play and the Human Condition; Disputed Pleasures: Sport and Society in Preindustrial England; Play Reconsidered: Sociological Perspectives on Human Expression; and Selves, Societies, and Emotions: Understanding the Pathways of Experience.

Cathlena Martin is the Assistant Professor of Game Studies and Design and Director of the Honors Program at the University of Montevallo. Her publications explore topics that include Peter Pan and video games, play in Ender’s Game, and game adaptations of children’s texts and have appeared in Beyond Adaptation: Essays on Radical Transformations of Original Works; Adaptation in Contemporary Culture: Textual Infidelities; and The Role-Playing Society: Essays on the Cultural Influence of RPGs. Her latest research focuses on the influence of tabletop role-playing games on board games and card games and on pedagogical uses of gamification.