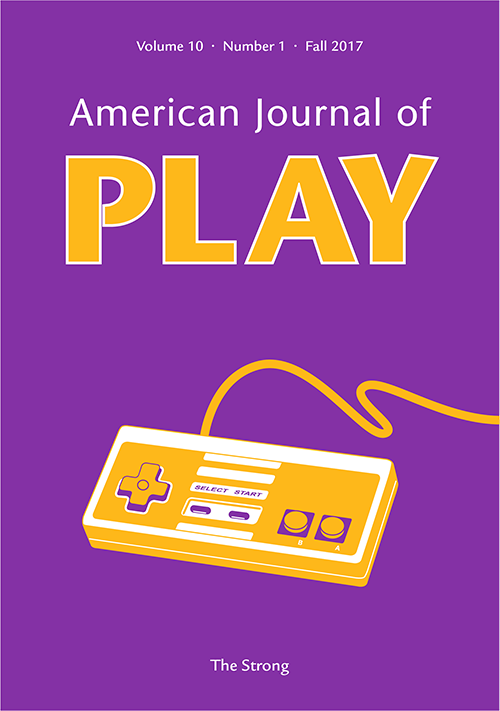 Welcome to the American Journal of Play special issue on the new video game history, another in the series of theme issues we publish from time to time. Each focuses on an important topic in the fast-developing study of play. Each is guest edited by a distinguished expert on the topic. And each includes work by the leading researchers and thinkers on the topic. Our guest editor, video game historian and director of The Strong’s International Center for the History of Electronic Games (ICHEG) Jon-Paul C. Dyson has assembled a series of articles that raise new questions about—and explore innovative approaches to—the study of video game history. An interview with Dyson, who discusses ICHEG’s efforts to collect, preserve, and interpret the history of video games, opens the issue. Raiford Guins interrogates the concept of a new video game history by analyzing changes in the research and writing of game history. Carly Kocurek examines the lives of three often overlooked women—a game regulation activist, an arcade route operator, and an industry executive. Laine Nooney deconstructs the origin story of early computer game developer Sierra On-Line and the company’s first game Mystery House. And in an excerpt from psychologists Patrick M. Markey and Christopher J. Ferguson’s book Moral Combat: Why the War on Violent Video Games Is Wrong, the authors examine the violent video game moral panic and its impact on game research. Taken together, these articles challenge our approach to video game history, explore new methodologies and source materials, and underscore the importance of video games to evolving histories of play.

Jon-Paul C. Dyson is vice president for exhibits and director of the International Center for the History of Electronic Games (ICHEG) at The Strong. Trained as a cultural and intellectual historian, he joined The Strong in 1998 and has worked on and supervised the development of dozens of exhibits on play and video games. He initiated the museum’s efforts to collect, preserve, and interpret video games in 2006, and today The Strong’s collections are the most comprehensive in the world. He writes frequently on video games and play for both scholarly and general audiences. This interview explores how The Strong has developed its video game collections, what some of the pressing issues are in preserving those materials, and some possible directions that video game scholarship will take in the coming years. Key words: collecting electronic games; electronic game history; electronic game preservation; International Center for the History of Electronic Games (ICHEG); video games

New…Now?: Or Why a Design History of Coin-op Video Game Machinesopens PDF file

The author asks what has occurred in game history scholarship to warrant the use of the adjective “new” in “New Video Game History” and suggests an awareness of process may now be influencing the study of games. In support of this observation, he organizes the article along two interrelated fronts. The first speaks to the on-going process of collection development at cultural institutions while the second addresses a shift in how game history is currently being written. The latter, he argues, demonstrates why we ought to consider carefully what “new” might signal for the critical historical study of games. At length, the article concludes by making a case for turning to design history to write a historical study of Atari’s coin-operated machines.  Key words: Atari; coin-ops; design history; graphic design; game history; indus-trial design; New Video Game History

The author discusses how, in practice, historians often obscure the effect of women’s lives, work, and contributions on their topic, and she takes special note of video game history. Using both history and film studies as examples, she argues that games historians can and should adopt feminist viewpoints to help ensure a fuller, more diverse accounting of the past. She examines the stories of three women—video game regulation activist Ronnie Lamm, route operator Amelia “Millie” McCarthy, and Exidy executive Lila Zinter—to demonstrate the types of historical information often overlooked in video game history. She concludes that video game historians must use archives, documents, and other research to think more broadly about the purpose and impact of their own work and not allow video game history to be reduced to a highlights reel that captures only the works of a few key players. Instead, their history should capture the depth and diversity of video games and game culture, including the impact of women on the field. Key words: arcade, coin-op games, Exidy, feminist history, Lila Zinter, Millie McCarthy, Ronnie Lamm, women in video games, video game history

The author retells the origin story of Sierra On-Line and its historic first prod-uct, the graphical adventure game Mystery House. She reviews the academic and journalistic writing that placed the story almost exclusively inside a nar-rative about early computer games, treating it as a saga of the competition between the graphic adventures Sierra On-Line produced and the literary games developed by companies like Infocom and dubbed interactive fiction. The author argues that such video game history proved both inaccurate and obfuscating, the she uses archival documentation and a counter-historical methodology to describe a different kind origin for Sierra On-Line and to deride the obviousness of presumptive beginnings within the discipline of game history. Key words: adventure, adventure game, game historiogra-phy, game history, genre, interactive fiction, Ken Williams, Mystery House, Roberta Williams, Sierra On-Line

Teaching Us to Fear: The Violent Video Game Moral Panic and the Politics of Game Researchopens PDF file

In this excerpt from their new book, Moral Combat: Why the War on Violent Video Games Is Wrong (BenBella Books, 2017), the authors present an argu-ment in defense of video games while dispelling the myth that such games lead to real-world violence. The authors define and examine moral panics and provide guidelines for identifying and understanding this phenomenon. They focus in particular on how the moral panic around video games has affected scientific research on games. Key words: gaming, moral panic, video game research; video games, video game violence

Ian Bogost, Play Anything: The Pleasure of Limits, the Uses of Boredom, and the Secret of Gamesopens PDF file

Jason Reid, Get Out of My Room!: A History of Teen Bedrooms in Americaopens PDF file

Dan Ackerman, The Tetris Effect: The Game That Hypnotized the World and Tetris: The Games People Playopens PDF file

Raiford Guins is Professor of Cinema and Media Studies in The Media School at Indiana University. Founding principal editor for the Journal of Visual Culture and coeditor, with Henry Lowood, for the MIT Press book series, Game Histories, he is the author of Game After: A Cultural Study of Video Game Afterlife. His writings on game history have appeared in numerous journals and magazines, including the Atlantic, Cabinet, Design and Culture, Design Issues, Digital Culture & Education, Game Studies, Journal of Design History, Journal of Visual Culture, and Reconstruction: Studies in Contemporary Culture. Guins is currently at work on a new book, Atari Modern: A Design History of Atari’s Coin-Op Cabinets, 1972–1979.

Carly A. Kocurek is Associate Professor of Digital Humanities and Media Stud-ies and Director of Digital Humanities at the Illinois Institute of Technology. A game designer as well, she has written two books: Brenda Laurel: Pioneering Games for Girls and Coin-Operated Americans: Rebooting Boyhood at the Video Game Arcade. Her work on game studies has appeared in such journals as Game Studies, The Journal of Gaming and Virtual Worlds, Technical Communication Quarterly, Communication Design Quarterly, Visual Studies, and others.

Patrick M. Markey is Professor of Psychology and the director of the Inter-personal Research Laboratory at Villanova University. He has published works in more than sixty books and journals, including Psychology of Popular Media Culture, Archives of Sexual Behavior, Journal of Research in Personality, and Journal of Health and Psychology. Christopher J. Ferguson is Associate Professor of Psychology and Department Chair at Stetson University. His work on media and gun violence has appeared in more than one hundred books and journals, including Perspectives on Psychological Science, Journal of Communication, International Journal of Mental Health and Addiction, and Personality and Individual Differences.

Laine Nooney is Assistant Professor of Media and Information Industries in the Department of Media, Culture, and Communication at New York University, where she specializes in video games and personal computing. Founding editor of the forthcoming ROMchip: A Journal of Game Histories, she has written for Game Studies, Journal of Visual Culture, and the Atlantic. Nooney is currently at work on a social history of the American computer game industry based on a case study of Sierra On-Line, entitled Before We Were Gamers: Remembering and Forgetting an Industry’s Dawn.