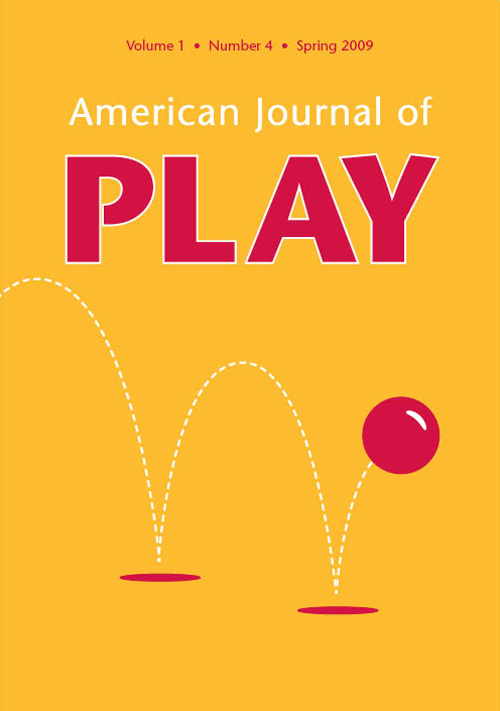 Discovering the Importance of Play through Personal Histories and Brain Images: An Interview with Stuart L. Brownopens PDF file

Stuart L. Brown is founder of the National Institute for Play, a California-based, not-for-profit organization dedicated to the notion that play can help transform the lives of individuals, families, schools, and organizations. Trained in general and internal medicine, psychiatry, and clinical research, Brown was a physician in the United States Navy, a fellow in internal medicine at the Mayo Foundation for Medical Education and Research, assistant dean at the Baylor College of Medicine in Houston, chief of psychiatry at Mercy Hospital and Medical Center in San Diego, and voluntary clinical associate professor of psychiatry at the University of California, San Diego, School of Medicine. He has written and lectured about play in numerous public and scholarly forums and has directed, coproduced, or produced several documentaries and learning series about play and similar topics for CBS, PBS, and BBC, including a National Geographic Society program on animals and humans at play and a PBS special titled The Promise of Play. His book, Play: How It Shapes the Brain, Opens the Imagination, and Invigorates the Soul, appeared earlier this year. In this interview, Brown discusses his passion for neurological research about play, how he came to it by studying animal play and play-deprived humans, and some of what he hopes to accomplish through the National Institute for Play. In Play Brown writes that he prefers describing or illustrating play to defining it, but here he concludes with a definition.

Play as the Learning Medium for Future Scientists, Mathematicians, and Engineersopens PDF file

In recent years, playful methods of learning have almost disappeared from school classrooms, and active, creative, extended playtimes during recess, at home, and in neighborhoods have also greatly diminished. This disappearance of play is especially unfortunate because it is happening at the very time that professionals in many scientific, mathematical, and engineering fields articulate the need for creative and innovative thinkers in their professions and advocate for the use of playful learning methods to assist students in developing the intellectual abilities required for excellence in these fields. This article discusses the importance of returning educators’ attention to play as the learning medium that can best develop these abilities and motivate students to pursue careers in science and mathematics.

Word Play: The Creation and Function of Novel Words in the Pretend Play of Two Siblingsopens PDF file

This article examines the creation of novel words by two English-speaking male siblings, ages five- and six-years-old, during a fourteen-month period of weekly play sessions. The questions the article addresses are: Did the boys produce novel words? What types of words? Why were these words created? And did they become a permanent part of the siblings’ vocabularies? The authors categorized all novel words as either developmental substitution, word play, redundant duplication, or word gap, depending on how the words functioned in the boys’ conversations. In this dyad, novel words functioned primarily as word play and filling a word gap (thereby providing a precise way to convey meaning). The novel words were nearly all nonce formations (isolated occurrences) and were composed mainly of compound words (two- or three-word combinations) and pseudowords (fictitious words). When the boys repeated novel words, they usually did so immediately, i.e. within the same play session. The study suggests that these children spontaneously produced a varied repertoire of novel words to meet and expand the needs of their imaginative or pretend play. The words were created in the moment and arose from the novel concepts and themes of pretend play. Research for this article was funded in part by the University of North Carolina at Greensboro.

This essay challenges science’s traditional taboo against anthropomorphizing animals or considering their behavior as indicative of feelings similar to human emotions. In their new book Wild Justice: The Moral Lives of Animals, the authors argue that anthropomorphism is alive and well, as it should be. Here they describe some activities of animals, particularly animals at play, as clear signs that they have recognizable emotions and moral intelligence. Based on years of behavioral and cognitive research, the authors discuss in their book that animals exhibit a broad repertoire of moral behaviors, including empathy and cooperation, but here they concentrate on the fairness and trust so essential to any kind of play, animal or human. They contend that underneath this behavior lays a complex range of emotions, backed by a high degree of intelligence and surprising behavioral flexibility. Animals, they find, are incredibly adept social beings. They rely on rules of conduct in their play, just as do humans, which in turn, helps prepare animals for dealing with the intricate social networks that are essential to their survival. The authors conclude that there is no moral gap between humans and other species. As the play of animals helps to make clear, morality is an evolved trait humans unquestionably share with other social mammals.

Play as a Foundation for Hunter-Gatherer Social Existenceopens PDF file

The author offers the thesis that hunter-gatherers promoted, through cultural means, the playful side of their human nature and this made possible their egalitarian, nonautocratic, intensely cooperative ways of living. Hunter-gatherer bands, with their fluid membership, are likened to social-play groups, which people could freely join or leave. Freedom to leave the band sets the stage for the individual autonomy, sharing, and consensual decision making within the band. Hunter-gatherers used humor, deliberately, to maintain equality and stop quarrels. Their means of sharing had gamelike qualities. Their religious beliefs and ceremonies were playful, founded on assumptions of equality, humor, and capriciousness among the deities. They maintained playful attitudes in their hunting, gathering, and other sustenance activities, partly by allowing each person to choose when, how, and how much they would engage in such activities. Children were free to play and explore, and through these activities, they acquired the skills, knowledge, and values of their culture. Play, in other mammals as well as in humans, counteracts tendencies toward dominance, and hunter-gatherers appear to have promoted play quite deliberately for that purpose.

Mark Bauerlein, The Dumbest Generation: How the Digital Age Stupefies Young Americans and Jeopardizes Our Future (Or, Don't Trust Anyone Under 30)opens PDF file

Marc Bekoff is Professor Emeritus of Ecology and Evolutionary Biology at the University of Colorado and cofounder, with Jane Goodall, of Ethologists for the Ethical Treatment of Animals. He is the recipient of numerous research and service awards; author of more than two hundred articles; and author, coauthor, or editor of nearly two dozen books. The latter include the Encyclopedia of Animal Behavior; the Encyclopedia of Human-Animal Relationships; the Encyclopedia of Animal Rights and Animal Welfare; The Emotional Lives of Animals: A Leading Scientist Explores Animal Joy, Sorrow, and Empathy—and Why They Matter; Listening to Cougar; and Animals at Play. Jessica Pierce is an ethicist and writer. She has taught ethics at several universities, lectured widely on environmental issues, and written a number of articles and book chapters. She is the author of Morality Play: Case Studies in Ethics and the coauthor of The Ethics of Environmentally Responsible Health Care and Environmentalism and the New Logic of Business.

Doris Bergen is Professor of Educational Psychology at Miami University in Oxford, Ohio. She chaired the department for ten years and is currently codirector of the university’s Center for Human Development, Learning, and Technology. She has published scores of articles and essays and is author, coauthor, or editor of seven books, including Assessment Methods for Infants and Toddlers: Transdisciplinary Team Approaches; Educating and Caring for Very Young Children: The Infant/Toddler Curriculum; Play from Birth to Twelve: Contexts, Perspectives, and Meanings; Human Development: Traditional and Contemporary Theories; and Brain Research and Childhood Education: Implications for Educators.

Peter Gray is Research Professor in Psychology at Boston College. In addition to teaching for thirty-plus years, he has in separate stints chaired the Psychology Department and its graduate program. Gray’s doctorate is in biological sciences, and he has written dozens of articles and delivered a wide range of papers on topics in psychology, education, and behavioral biology. He is author of Psychology, an introductory college textbook now in its fifth edition. His present research focuses on play.

Eva E. Nwokah is Associate Professor and Director of Graduate Studies in the Department of Communication Sciences and Disorders at the University of North Carolina at Greensboro. Trained academically in the United Kingdom, she holds a doctorate in developmental psycholinguistics, is a North Carolina–licensed speech-language pathologist, has extensive clinical experience in England, Canada, and the United States, and has published more than two dozen papers on early childhood language and emergent literacy. Kelley N. Graves is a North Carolina–licensed psychologist and currently serves as an Associate Director and Assistant Research Professor for the Center for Youth, Family, and Community Partnerships at the University of North Carolina at Greensboro.

Editors’ Note: In Volume 1, Number 3, Miriam Forman-Brunell’s latest book was described incorrectly as a work on storytelling. Her latest book is about babysitting. The editors regret the error.