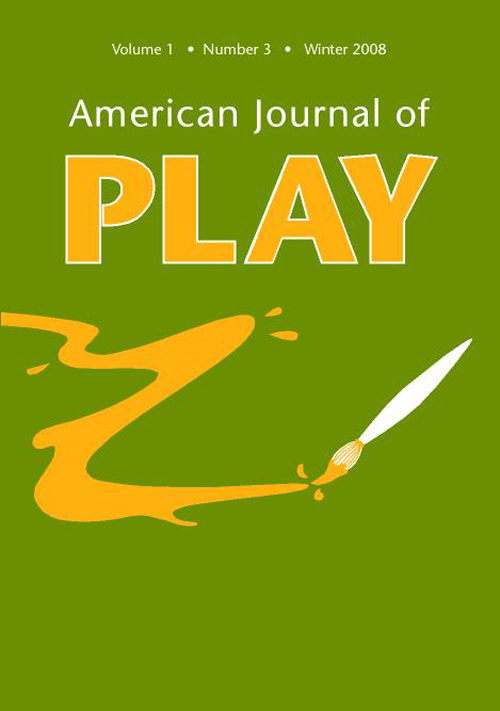 The Cultural Origins and Play Philosophy of Playworkers: An Interview with Penny Wilsonopens PDF file

Penny Wilson is a playworker—one of a group of professionals who facilitate children’s play in adventure playgrounds, parks, and other settings, principally in the United Kingdom. Wilson grew up in the Southeast of England and spent much of her childhood playing on the coast near her family home. She studied illustration in art school, settled in London’s East End, and came to playwork through a community program for children with disabilities. Over the course of two decades, she has earned distinction for helping such children—especially those with disabilities—play with their peers. Currently she works for the Play Association at Tower Hamlets, a second-tier, not-for-profit organization and play provider. She is an ambassador for playwork and has visited the United States several times to advocate for the incorporation of playworkers into American society. In this interview, she recounts how playwork originated in Great Britain, tells how playworkers view children’s free play and how they facilitate it, describes Britain’s adventure playgrounds, and elaborates on the play of children with disabilities.

This article is based on a study of the role of play and experiential-learning activities beyond formal schooling in sixteen nations. The study, supported by Unilever PLC, gathered information from the mothers of twenty-four hundred children in countries in North America, South America, Africa, Europe, and Asia who described and rated their children’s daily activities in telephone interviews or face-to-face conversations. They answered questions about their beliefs and attitudes concerning experiential learning, about their worries for the safety and health of their children, and about the general values of their children’s various pastimes, including the use of electronic media. The study concerned children of comparable socioeconomic status in each country and looked at equal numbers of boys and girls and an equal distribution of children’s ages ranging from one to twelve. The study’s findings indicate surprising similarities of children’s play in all nations. The mothers interviewed agreed, for example, that a lack of free-play and experiential learning opportunities was eroding childhood. The study indicates that children’s major free-time activity is watching television. In analyzing the data collected in the study, the authors discuss detailed cross-national comparisons and differences in play activities by degrees of industrial development.

The authors explore how children’s play can support the development of the foundations of mathematics learning and how adults can support children’s representation of—and thus the mathematization of—their play. The authors review research about the amount and nature of mathematics found in the free play of children. They briefly discuss how children develop different types of play and describe ways adults can support and guide each of these to encourage an understanding of mathematics and to enhance children’s mathematical skills. The authors’ activities described in this article and the time to prepare it were partially funded by grants from the Institute of Education Sciences (IES) in the U.S. Department of Education and from the National Science Foundation (NSF).

The authors investigate the nearly ubiquitous cultural icon for girls’ play, the princess. They survey historical instances of princess play from the beginning of the American republic to the New Millennium, look at the literature concerning princesses in various periods, and discuss the individual recollections about princess play of a number of women. The authors argue that the figure of the princess, by absorbing a range of girlhood ideals, aids in reconciling the contradictory notions about what it means to be a girl in contemporary society.

The authors discuss the growing evidence that strenuous physical activity is not only healthy for students but improves their academic performance. Based on such research, they argue that schools in the United States need to stop eliminating physical-education programs under the current political pressures to emphasize academics
and instead to reform traditional physical education. Modern physical education should move away from its competitive-sports approach to one that employs a wide range of play involving strenuous physical activity for every student.

Jim Holt, Stop Me if You've Heard This: A History and Philosophy of Jokesopens PDF file

Michael A. Messner, Out of Play: Critical Essays on Gender and Sportopens PDF file

Lawrence Kutner and Cheryl K. Olson, Grand Theft Childhood: The Surprising Truth about Violent Video Games and What Parents Can Do and The Ecology of Games: Connecting Youth, Games, and Learningopens PDF file

Miriam Forman-Brunell is Professor of History at the University of Missouri–Kansas City. She has contributed to numerous journals, edited volumes, and encyclopedias and lectured internationally on topics in children’s history. She is author of Made to Play House: Dolls and the Commercialization of American Girlhood, 1830–1890, general editor of Girlhood in America: An Encyclopedia, and coeditor of a forthcoming twovolume reader on girls’ history and culture. Her latest book, a history of storytelling, is scheduled for publication in 2009. Julie Eaton is a graduate student at Ohio State University, where she is comparing classic and contemporary princess literature and examining the impact of the retelling of the Cinderella fairy tale on girls today. She has presented at a number of conferences.

Julie Sarama is Associate Professor of Learning and Instruction and Douglas H. Clements is Distinguished Professor of Learning and Instruction in the Graduate School of Education at the University at Buffalo. Sarama has taught at every level from kindergarten to university, and Clements is a member of the president’s National Math Advisory Panel. Both are widely published authors of books and articles, and they have received numerous large research grants for such projects as Building Blocks-Foundations for Mathematical Thinking, Pre-Kindergarten to Grade 2: Research-based Materials Development, funded by the National Science Foundation, and Scaling up TRIAD: Teaching Early Mathematics for Understanding with Trajectories and Technologies, funded by the federal Interagency Educational Research Institute. The latter project, supported by an award of $6 million, is a national study of the authors’ integrated early childhood mathematics curriculum and professional development innovations.

Jacob Sattelmair is a doctoral student in epidemiology at the Harvard School of Public Health and one of the first three recipients of fellowships from the school’s $5 million Donald and Sue Pritzker Nutrition and Fitness Initiative. Previously, Sattelmair studied the science and medicine of athletic performance at the University of Oxford in England. John J. Ratey is Associate Clinical Professor of Psychiatry at Harvard Medical School. His numerous publications include Spark: The Revolutionary New Science of Exercise and the Brain and A User’s Guide to the Brain: Perception, Attention, and the Four Theaters of the Brain, plus cowritten works such as Delivered from Distraction: Getting the Most Out of Life with Attention Deficit Disorder. In 2006 Ratey received the Excellence in Advocacy award from the nonprofit group PE4Life in recognition of his efforts supporting the adoption of regular, aerobic-based physical education.

Dorothy G. Singer is Senior Research Scientist and Jerome L. Singer is Professor Emeritus of in the Department of Psychology at Yale University, where they are codirectors of the Family Television Research and Consultation Center. Dorothy G. Singer’s research areas are early childhood development, effects of television on youth, and parent training in imaginative play. Jerome L. Singer is a specialist in the psychology of imagination and daydreaming. Their joint publications include Handbook of Children and the Media; Make-Believe Games and Activities for Imaginative Play: A Book for Parents, Teachers, and the Young Children in Their Lives; and Imagination and Play in the Electronic Age. Each of the Singers has also written, cowritten, and coedited numerous other works, among which are: Imagery in Psychotherapy; Play=Learning: How Play Motivates and Enhances Children’s Cognitive and Social-Emotional Growth; and A Mandate for Playful Learning in Preschool: Presenting the Evidence. Heidi D’Agostino is a marketing specialist and Senior Vice President at StrategyOne, a New York–based market research and communications firm, where she leads its global research and white paper practice, including managing research engagement with scholars and industry. Raeka DeLong, formerly a senior account supervisor at StrategyOne, is currently a senior manager for national and international branding, attitudinal, and behavioral studies at the Nielsen Company.