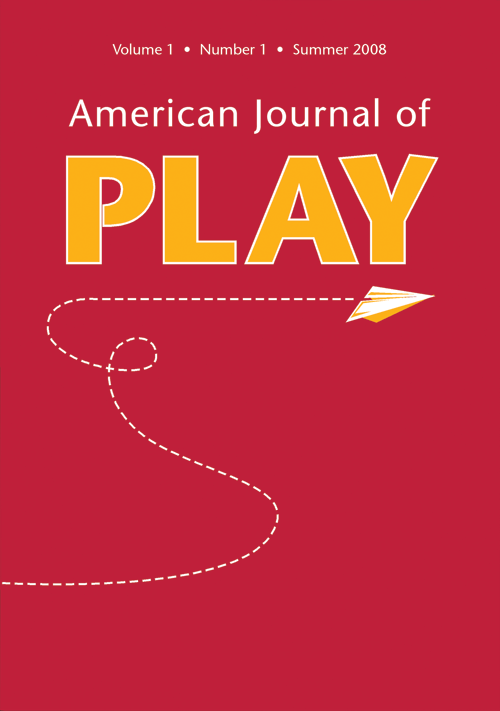 The Power of Play: Learning What Comes Naturallyopens PDF file

Although under attack from some goal-oriented politicians and parents and often considered superfluous by school administrators and teachers, free play remains vital to human health and creativity. Contrary to the notion that play should serve utilitarian ends or consist primarily of organized sports, the author makes a case for self-initiated physical play free of educational toys, computer games, and television, especially early in childhood but also throughout young life. Combining ideas from Sigmund Freud and Jean Piaget, the author views play as one of three necessary elements of a full life, the others being work and love.

Play in America from Pilgrims and Patriots to Kid Jocks and Joystick Jockeys: Or How Play Mirrors Social Changeopens PDF file

Drawing on a range of sources in the history of play, this article discusses how play for all ages mirrors social change, especially but not exclusively in America. The article explores three broad themes from colonial times to the present: first, how play was shaped by changes in work and time at work; second, how play activities were transformed by emerging technologies of the nineteenth and twentieth centuries and by commercialization; and third and finally, how play and its meanings changed along with childhood and the family.

Play, ADHD, and the Construction of the Social Brain: Should the First Class Each Day Be Recess?opens PDF file

Because of the role of play in the epigenetic construction of social brain functions, the young of all mammalian species need sufficient play. For the same reason, the nature of that play becomes an important social policy issue for early childhood development and education. Animal research on this topic indicates that play can facilitate the maturation of behavioral inhibition in growing animals, while psychostimulants reduce playfulness. Our failure to provide adequate opportunities for natural play in modern societies, the author argues, may have contributed to the steady growth in the diagnosis of Attention Deficit Hyperactivity Disorders (ADHD) in children, which in turn has increased prescriptions of highly effective attention-promoting psychostimulants whose developmental effects on growing brains remain unclear. The author concludes that the incidence of ADHD—and hence the need for psychostimulant medications for growing children—may diminish if we create play sanctuaries for preschool children, where they could play naturally with each other, and thereby facilitate frontal lobe maturation and the healthy development of pro-social minds. Physical play should be part of the daily social diet of all children throughout grade school.

A preeminent play-theory scholar reviews a lifetime devoted to the study of play in a lively, even playful, recounting of his illustrious career and some of its autobiographical roots. The author covers the development of his three major theories of play—as a viability variable, as culturally relative play forms, and as a co-evolutionary multiplex of functions—and points to some new areas of inquiry on the topic.

Richard Louv, Last Child in the Woods: Saving Our Children from Nature-Deficit Disorder and The Dangerous Book for Boysopens PDF file

Pamela Riney-Kehrberg, Childhood on the Farm: Work, Play, and Coming of Age in the Midwestopens PDF file

Christine Jeandheur Ferguson and Ernest Dettore, Jr., eds., To Play or Not to Play: Is It Really a Question?opens PDF file

Gary Cross is Distinguished Professor of Modern History at Pennsylvania State University and author of numerous works on the history of toys and play. Among them are Kids’ Stuff: Toys and the Changing World of American Childhood and Playful Crowd: Pleasure Palaces in the Twentieth Century. He is also editor-in-chief of the Encyclopedia of Recreation and Leisure in America.

David Elkind, professor of child development at Tufts University, has written and lectured widely in the United States and abroad about the cognitive and social development of children and adolescents. His numerous books include The Hurried Child; All Grown Up and No Place to Go; and, most recently, The Power of Play: How Spontaneous, Imaginative Activities Lead to Happier, Healthier Children.

Jaak Panksepp has contributed more than 300 scientific articles in the fields of psychology and affective neuroscience. As Distinguished Research Professor Emeritus of Psychology at Bowling Green State University and Baily Endowed Chair of Animal Well-Being Science at Washington State University’s College of Veterinary Medicine, he is author of Affective Neuroscience: The Foundations of Human and Animal Emotions and editor of the Textbook of Biological Psychiatry.

Brian Sutton-Smith, a folklorist and educational psychologist, is among the world’s foremost play theorists. His many books include A History of Children’s Play: New Zealand 1840–1950; Toys and Culture, and The Ambiguity of Play. Formerly at Columbia University and now retired from the University of Pennsylvania, he is currently writing a volume on play and emotional survival.

Marjorie Taylor is professor of psychology at the University of Oregon and author of Imaginary Companions and the Children Who Create Them. She is currently conducting a multicultural study of children’s pretend play. Candice M. Mottweiler, a senior psychology major at the University of Oregon, is writing an honors thesis on narrative creativity in children with imaginary companions.