ROCHESTER, NY—The Strong is pleased to announce that it has received a $700,000 grant from the National Endowment for the Humanities (NEH) in the most recent round of federal awards. The museum was the only project nationwide this year to receive the “Chairman’s Special Award,” which highlights major exhibit projects that present significant topics in the humanities. The funding will support the implementation of Digital Worlds (tentative title)—a 24,000-foot exhibit planned as part of the museum’s expansion that will explore the influence of electronic games on cultural history.

“With the help of this grant, The Strong will be able to build a truly one-of-a-kind experience that will make the museum even more of a national destination,” says Steve Dubnik, president and CEO of The Strong. “Support from the National Endowment for the Humanities and other organizations is vital in helping transformative projects like ours to be successful so that we can share the cultural impact of play and electronic games with the world. We’re honored to be selected for the Chairman’s Special Award and appreciate NEH’s recognition of the importance of video games to our ever-changing social history and cultural fabric.”

The National Endowment for the Humanities supports humanities research, education programs, cultural preservation, films, exhibitions, and virtual reality projects across the United States. This year, they awarded $29 million for 215 projects including The Strong’s.

“NEH grants help strengthen and sustain American cultural life, in communities, at museums, libraries, and historic sites, and in classrooms,” says NEH Chairman Jon Parrish Peede. “NEH is proud to help lay the foundations for public engagement with America’s past by funding projects that safeguard cultural heritage and advance our understanding of the events, ideas, and people that have shaped our nation.” 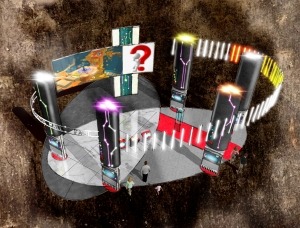 The Strong’s project—Digital Worlds—will tell the story of how video games have shaped the way that people connect, play, and learn. It will include two distinct areas, tentatively titled Level Up and High Score. In Level Up, guests will be fully immersed in the world of video games and assume the role of a character on a quest as they move through interactive spaces that put them directly into the video games, asking them to complete puzzles, navigate mazes, solve riddles, and face obstacles. In High Score, guests will learn about the evolution of the video game industry and how the games are made. The space will put an emphasis on gaming artifacts from the museum’s world-renowned collections and explore how game designers wed the humanities, art, and STEM fields to create immersive, compelling games.

Says Jon-Paul Dyson, The Strong’s vice president for exhibits and director of the International Center for the History of Electronic Games, “Video games are perhaps the most important medium of the 21st century. Just as the novel fueled imagination in the19th century and film and television defined the cultural narratives of the 20th century, electronic games today are rapidly driving cultural and social change. We look forward—with the help of NEH—to continue to tell that important story to visitors from around the world.”

The new exhibits are slated to be open to the public in 2022.

About The Strong
The Strong is the only collections-based museum in the world devoted solely to the history and exploration of play. It is home to the International Center for the History of Electronic Games, the National Toy Hall of Fame, the World Video Game Hall of Fame, the Brian Sutton-Smith Library and Archives of Play, the Woodbury School, and the American Journal of Play and houses the world’s largest and most comprehensive collection of historical materials related to play.

About the National Endowment for the Humanities
The National Endowment for the Humanities (NEH) is an independent federal agency created in 1965. It is one of the largest funders of humanities programs in the United States. Because democracy demands wisdom, NEH serves and strengthens our republic by promoting excellence in the humanities and conveying the lessons of history to all Americans. The Endowment accomplishes this mission by awarding grants for top-rated proposals examined by panels of independent, external reviewers.