ROCHESTER, New York—Small but mighty Matchbox Cars have raced across the finish line and been inducted into the National Toy Hall of Fame, joining the popular collectible card game Magic: The Gathering and time-honored coloring book in the class of 2019. The honorees were chosen from a field of 12 finalists that also included Care Bears, Fisher-Price Corn Popper, Jenga, Masters of the Universe, My Little Pony, Nerf Blaster, Risk, smartphone, and top.

About Matchbox Cars: Lesney Products debuted Matchbox Cars in England in 1953, and they sped past earlier competitor toy cars by combining high-quality with low prices. The cars appeared in the United States in 1954 and, by 1960, Matchbox sold more than 100 million units annually. They faced stiff competition from Hot Wheels (brought to market by toymaker Mattel in 1968 and inducted into the National Toy Hall of Fame in 2011), and launched their own “superfast” line of cars in response. In 1997, Mattel purchased the Matchbox Cars line, uniting them under 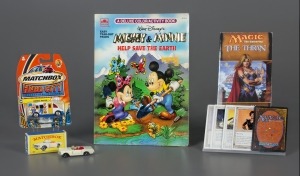 the same banner as their longtime rival. Matchbox Cars remain a top seller for Mattel.

Says Chief Curator Christopher Bensch, “Matchbox Cars revolutionized the toy car industry after their introduction, and the name ‘Matchbox’ has become synonymous with miniature cars. It’s only fitting that they join the Toy Hall of Fame to sit in the winner’s circle alongside Hot Wheels, the other titan of the field.”

About Magic: The Gathering: Wizards of the Coast published Magic: The Gathering in 1993, and the uniquely collectible card game became so successful that the firm could not meet demand at first. The game—which draws on popular fantasy themes—requires both chance and skill to defeat opponents in one-on-one battles, encouraging players to collect new cards and to refine their deck and strategies. It continues to evolve and produce new sets of cards and storylines.

Says Curator Shannon Symonds, “Magic: The Gathering changed the landscape of collectible card gaming with its introduction more than 25 years ago, and it’s become a part of pop culture—leading to book series, electronic games,  and even a series on Netflix. The fact that it continues to maintain popularity is a testament to its revolutionary gameplay and constant evolution, making it engaging for beginners and experts alike.”

About Coloring Book: Coloring books appeared in America as an outgrowth of European educational reforms, but McLoughlin Brothers, a New York printing company, is credited as the coloring book’s inventor. Educators now use coloring books to teach such essential and diverse subjects as history, geography, and even geometry. Though often thought of as a children’s activity, more complex coloring books aimed at adults became increasingly popular in the 2000s.

Curator Nic Ricketts says, “People have expressed their creativity by adding color to shapes and images for much more than 100 years, and coloring books have provided educational and calming benefits to children and adults for more than a century.”

About the National Toy Hall of Fame
The National Toy Hall of Fame® at The Strong, established in 1998, recognizes toys that have inspired creative play and enjoyed popularity over a sustained period. Each year, the prestigious hall inducts new honorees and showcases both new and historic versions of classic toys beloved by generations. Anyone can nominate a toy to the National Toy Hall of Fame. Final selections are made on the advice of historians, educators, and other individuals who exemplify learning, creativity, and discovery through their lives and careers. Toys are celebrated year-round in a state-of-the-art exhibit at The Strong museum in Rochester, New York. For more information about the hall and to see the list of previous inductees, visit toyhalloffame.org

About The Strong
The Strong is a highly interactive, collections-based museum devoted to the history and exploration of play. It is one of the largest history museums in the United States and one of the leading museums serving families. The Strong houses the world’s largest and most comprehensive collection of historical materials related to play and is home to the International Center for the History of Electronic Games, the National Toy Hall of Fame, the World Video Game Hall of Fame, the Brian Sutton-Smith Library and Archives of Play, the Woodbury School, and the American Journal of Play. Together, these enable a multifaceted array of research, exhibition, and other interpretive and educational activities that serve a diverse audience of adults, families, children, students, teachers, scholars, collectors, and others around the globe.