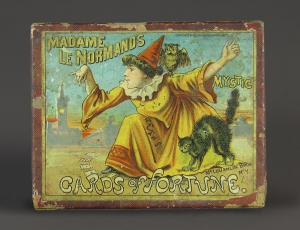 Is our destiny in our hands, in God’s hands, or are we merely tossed on the winds of chance?

Those deep questions of causality and chance have long preoccupied philosophers and thinkers, and I was reminded of them a while ago when reading a book about 17th-century Puritan belief. This followed a conversation I had with a researcher at The Strong who was interested in the links between popular understandings of quantum mechanics and thinking about play. “God doesn’t play dice,” Albert Einstein famously quipped about quantum mechanics, but for millennia people have often thought that their fate was tied to the whims of fortune, or Fortuna as the Romans called the goddess of fate.

If one’s fate was tied up in the play of the gods, then it paid to try and discern that future. The classicist Mary Beard in her book Confronting the Classics, discusses a Roman fortune-telling book, The Oracles of Astrampsychus, that gave “cleverly randomized answers to many of ancient life’s most troubling problems and uncertainties.” By picking a random number, then consulting a carefully constructed index and following a complicated formula, Romans were able to read answers to problems such as: 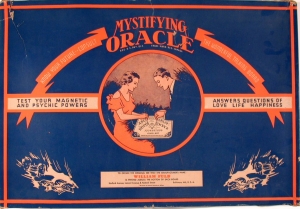 Will my wife have a baby?

Will I be able to borrow money?

Will I be sold?

Will I be caught as an adulterer?

The Oracles of Astrampsychus—and many other tools for astrology, soothsaying, and fortune telling—were popular because they seemed to offer some possibility of divining the future, especially desirable at a time when life was often chancy and vulnerable.

Brian Sutton-Smith in The Ambiguity of Play—his magisterial survey of the way play has been construed over the centuries—notes that fate “is the most pervasive of all play rhetorics but the least publicly ideologized in modern times.” For Hindus, the world is the plaything of the gods. For many Native Americans, gambling was a form of sacred play, in which the dictates of fate and fortune were expressed through ritual games (though these were often games with great stakes). 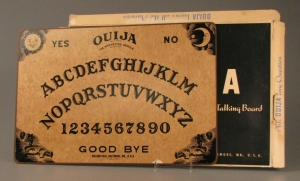 The 17th-century Puritans—to get back to the book that sparked these thoughts, in this case David Hall’s Worlds of Wonder, Days of Judgment—had a world view that in some ways comported with and in many ways resisted this belief in the controlling power of the play of fate. For Puritans, the operative word was “Providence,” the belief that God controlled not only the long-term destiny of the world but the day-to-day details which were arranged according to His plan.

The consequence was that Puritans searched the world of nature and man for signs that seemed harbinger of some direction of God’s plan. Shapes in the clouds, a deformed birth, or a freak accident all seemed like they offered signs of what was to come. What is interesting to me about this Puritan view is that on a philosophical level it represents a rebuke of the belief that events in the world are at the mercy of random fate—after all God controls everything—on the other hand, on a practical level, the effect was to find in seeming random events a way of interpreting the world. When a snake slithered into a gathering of ministers in the Massachusetts Bay Colony in 17th-century Cambridge, the reverend group quickly began discoursing on its meaning, to try to discern what it meant. In this case the ministers tried to read the book of nature in the way ancient Romans tried to read The Oracles of Astrampsychus or ancient soothsayers tried to divine meaning from the flight of swallows or the entrails of sacrifices. 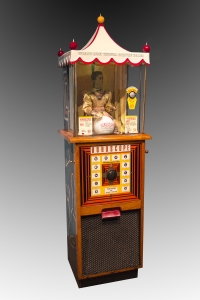 In America today, however, the predominant worldview tends to reject both the playful and the providential belief in randomness and chance outside our control. Instead we valorize control and self-help. Until the 17th century, for example, happiness was often viewed as something that happened to you, but our Declaration of Independence put our own pursuit of this elusive feeling at the center of our identity as individuals and as a nation. In recent years a happiness industry developed (drawing on the field of Happiness Studies whose nostrums and prescriptions are dispersed in articles and TED talks) purporting to give us formulas, techniques, and algorithms for finding and keeping happiness. Similarly, in work we are encouraged to manufacture our own success, even if sometimes great societal forces may play a large role in determining whether or not we can succeed. 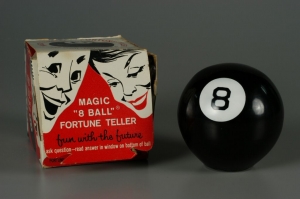 And yet the old beliefs in fortuna have not completely subsided. Sometimes they reappear in our play. The Strong’s collection of 19th-century board games is rife with examples of fortune-telling board games. The opens in a new windowouija board entertained many a slumber party. An ancient Roman who used the fortune telling Oracles of Astrampschus would quickly pick up how to interpret the fortune telling of the Magic 8 Ball. Coin-operated arcade fortune tellers were a staple of the 20th-century boardwalk. Checking the horoscope is a daily habit for millions. When people check to see what the future holds for Sagittarius, Libra, or Cancer are they trying to divine the future, plot their destiny, or just plain playing around?

No one knows exactly, or as the Magic 8 Ball would say, “Reply hazy, try again.”

By Jon-Paul Dyson
Director, International Center for the History of Electronic Games
Vice President for Exhibits