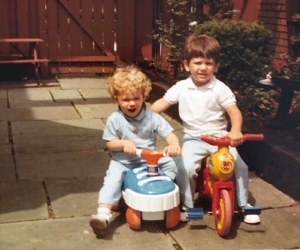 Ride-on toys, or kiddie cars, first appeared on the paved sidewalks and driveways of America in the early 20th century. Over the years, ride-ons have included cars, trucks, tractors, grasshoppers, worms, sneakers, you name it. Whatever their era or style, ride-on vehicles provide kids with a sense of independence and adventure, while also cultivating physical and mental skills.

The earliest ride-ons depicted animals such as swans and horses. The examples made around World War I often reflected the patriotism of the time. Sometime between 1915 and 1920, S. A. Smith Mfg. Co. of Brattleboro, Vermont, created a tricycle presenting the head of a bald eagle, a symbol of American strength and pride. The eagle’s outstretched wings served as handlebars, and the tail was secured by the seat in the form of a federal shield. Although it resembled a piece of folk art, kids would have used this to bump along pavement. 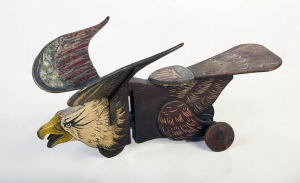 Nearly as soon as the first automobile hit the roads, American children played with toy cars, read about adventures by car, and learned about combustion engines. Automobile manufacturers knew that captivating the attention of children guaranteed future generations of car buyers. In 1919, Murray Ohio Mfg. Co. of Cleveland began to manufacture car parts. By 1923, the company also manufactured toy cars by applying the steel and production methods used for its full-size car parts. Marketed as Steelcraft Wheel Goods, the toys included Pontiacs, Chryslers, Buicks, hook and ladder trucks, and station wagons, among others. A 1930s advertisement for the Lincoln Zephyr Pedal Car noted that it was intended for children ages two to six, had rubber tires, new style hubcaps, adjustable rubber pedals, a radiator ornament, and a French bulb horn. Pedal cars remained popular throughout the 1950s and 1960s, and they have enjoyed a resurgence among those interested in retro-style. 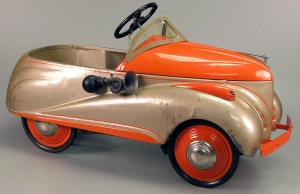 In the 1960s, designers at Louis Marx & Co. took apart a tricycle, mixed up the parts, and reassembled them into an upside-down trike that handled like a race car. The new kind of trike, the Big Wheel, owed its novelty and high performance to its fresh design. On old steel tricycles, the rider perched on a seat above the drive wheel—and pitched over on sharp turns. And traditional tricycles did not have much speed. But the Big Wheel rode only a few inches off the pavement, allowing high-speed skid-outs on slanted or uneven surfaces. Just as the original owners of the Big Wheel aged out of the trike, Louis Marx & Co. released the Green Machine, a pedal-operated hot rod with adjustable bucket seats. Riders steered the Green Machine from the back with stick-shift controls instead of handlebars, which allowed kids to navigate tight turns and drift. Promotional materials touted that this was the hot ride “for guys 8, 9, 10 years old who really know how to ride,” and the Green Machine had a “hug the road tip-proof-design.” Not only did the Green Machine feature innovative design, but it also looked like something that might catch the eye of Ed “Big Daddy” Roth, a key figure in Southern California’s Kustom Kulture and hot rod movement.

Today’s ride-on vehicles include electric-powered Mercedes, Jeeps, and Jags. While my three-year-old loves to cruise around in his electric-powered Volkswagen Bus, it’s his balance bike that fulfills his need for speed and adventure, and he loves to bounce along on his Radio Flyer Inchworm. Many kids still love basic pedal-powered and push-powered vehicles. Hey, now might be the perfect time to get some chalk and sketch out a street system or a freeway interchange on your driveway and set an eager rider in your household on their way to a new near-to-home ride-on adventure!