The Rolls-Royce of Jigsaw Puzzles 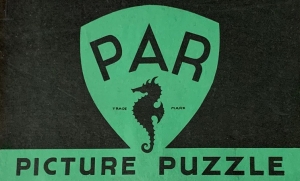 Everybody recognizes a jigsaw puzzle. A national craze in the 1930s, puzzles continue to sell well today. But few of us know the pleasure of assembling an all-wood, hand-cut puzzle. These playthings for adults first appeared around 1910 in the United States. While basic puzzle construction was simple—glue a paper print to wood or cardboard and then cut it out with a saw—they were made purposefully difficult to assemble. At that time, no serious puzzle came with a picture of the assembled image—that was considered cheating. But just as Rolls-Royce cars are considered the best-built and the most expensive, one wood puzzle brand seriously challenged puzzlers and commanded the highest prices. That brand was Par jigsaw puzzles.

Who Made Par Puzzles? 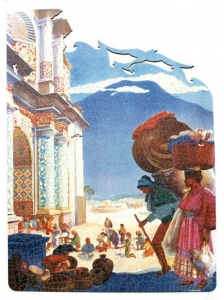 Par was created by Francis Ware and John Henriques, business and life partners who began designing and cutting wood puzzles for fun during the early years of Great Depression, but soon discovered their friends and acquaintances would pay to rent or even purchase the finely crafted playthings. Some lucky advertising brought the pair new affluent clients who could afford the prices they had to charge. After that, a few ads in the New York Times followed by word-of-mouth promotion brought them all the clients and business they needed.

From the start, Ware and Henriques were determined to create the most challenging and highest quality puzzles—and they continued to refine their techniques. Amazingly, they did this while rival manufacturers, battling the Depression’s scarcities, sought ways to cut corners and cheapen their products. The two men disliked the kind of traditional tavern or landscape scenes that commonly appeared as puzzles. They purposefully chose modern art prints by artists such as Picasso and Matisse, and they particularly favored poster images for train and air travel, especially those of Pan American Airways. But Par puzzles are much, much more than just sawn-apart pictures. 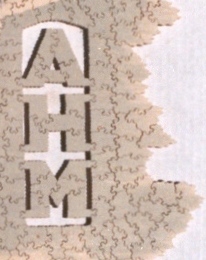 What Made Them Special?

The earliest jigsaw puzzles were made on plain wood bases, which tended to warp over time or in harsh conditions. Plywood was readily available for artists and craftspeople by 1900. With several layers of wood glued at angles to each other, plywood is much less apt to warp, and is stronger overall. Most wood jigsaw puzzles, including the early Par works, were cut from three-ply plywood. Ever-improving on its products, Par’s later puzzles were typically cut from stronger, five-ply stock. The puzzles also featured many whimsies or figural-shaped pieces. These include Par’s “signature” piece—a seahorse—at least one of which is found in every puzzle. And Par would cut owner’s initials, at their request, into the middle or around the edge of the puzzle. Sometimes a lucky owner’s initials appeared in a “drop-out,” an open space inside the body of the puzzle. This device challenged the most serious puzzlers, who’d struggle to find an oddly shaped piece only to realize, finally, that the void was deliberate. 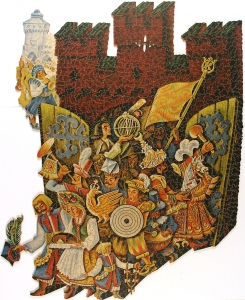 Par for the Puzzle!

Par mastered other cutting tricks to make assembly more difficult. Like other wooden puzzle makers, the firm utilized color-line cutting to foil a puzzler trying to find a piece that carried both earth and sky. Par purposefully cut corner pieces through the middle diagonally―to hide them—and created false corner pieces within the body of the puzzle. It cut puzzles with irregular edges on purpose. Sometimes one entire side was purposefully jagged or cut into a shape. And Par boxes always carried a printed “Par time,” (a term appropriated from the game of golf which also made a catchy business name) for how long it should take a puzzler to assemble the puzzle. Often both the puzzle title and the Par time would be purposefully deceptive. The title “Bobby’s Beat” represented a London street scene, while a Par time of “ask J M W” referred to the buyer, who may have asked that Par time be left off the box label because it caused such frustration. Few customers could match or beat the astoundingly short allotments.

The loyal customer list for Par puzzles included presidential hopeful Wendell Wilkie and 34th president Dwight D. Eisenhower. And prominent families included Vanderbilts, Astors, Rockefellers, and du Ponts. Time magazine publisher Henry Luce and his wife Clare Booth Luce were both Par supporters and publicized the firm by word of mouth and in print. Edsel Ford ordered Pars for his yacht. Comedian Jimmy Durante was a puzzle fan, as were film stars Humphrey Bogart, Bing Crosby, Yul Brynner, Marlene Dietrich, James Garner, Marilyn Monroe, and Gary Cooper, to name only a few. The Duke of Windsor insisted that each puzzle cut for him include “HRH” for “His Royal Highness,” the Windsor crest, and silhouettes of his four cairn terriers. Puzzles for the duchess carried the subtler “WW.”

In 2018 Daryl and John Lillie, puzzlers and puzzle collectors, gave a group of 42 exceptional and exceptionally challenging Par puzzles to The Strong National Museum of Play. The puzzles add to the museum’s vast jigsaw puzzle collection and help complete the stories of every type of jigsaw puzzle, from the common like the Volkswagen Beetle versions to the ultimate Rolls-Royce.

History of Par puzzles taken from The Jigsaw Puzzle-Piecing Together A History by Anne D. Williams