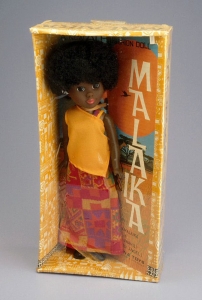 The history of black dolls is complicated. Post-Civil War minstrel shows often influenced the black dolls produced in the late 1800s, such as promotional dolls of Rastus advertising Cream of Wheat or the paper dolls of Aunt Jemima and her family printed inside pancake mix boxes. Many African American families could only afford these stereotypical black dolls. R. H. Boyd imported black porcelain dolls from European dollmakers through his National Negro Doll Company in 1911, but went out of business just four years later.

Manufacturers streamlined the mass-production of plastic dolls following World War II. Yet, many firms claimed that production of molds for dolls with African American features presented an unnecessary expense. By the 1950s, opens in a new windowSara Lee Creech, a businesswoman and social activist, became determined to provide an “anthropologically correct” doll for black children, although without commercial success. However, a few years later, Shindana Toys began producing dolls with black features and the company’s initiatives contributed to an important part of American cultural history. 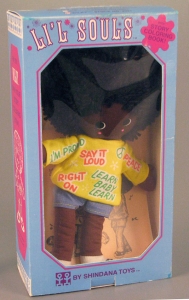 Shindana grew out of the social upheavals of the mid-1960s. Following the 1965 Watts Riots in Los Angeles, California, Louis S. Smith, II and Robert Hall worked with civil rights activists and community members to form Operation Bootstrap. The cooperative sought to rebuild the community and to provide jobs for its residents. Alarmed by the impact of the riots (34 deaths, numerous fires, and the destruction of $40 million worth of property) near their business establishments, Chase Manhattan Bank, Mattel Toy Company, Sears Roebuck & Co., and Equitable Life Insurance helped to finance portions of the operations. In 1968, Operation Bootstrap launched Shindana Toys, a community-owned company dedicated to making and marketing toys that “reflect black pride, black talent and most of all, black enterprise.”

In its first year, Shindana produced Baby Nancy that Newsweek described as having “Negroid features and natural hair that drinks milk from a bottle and otherwise functions just like the white dolls peddled on morning cartoon shows.” Shindana manufactured and shipped 8,000 dolls in time for the holiday season. Baby Nancy proved an instant success and Shindana Toys quickly garnered media attention. Smith told reporters that the company believed that through the marketing of black dolls and toys “both black and white children can learn to relate at an early age” and “foster the spirit of what Shindana is all about, love.” The company proved an exemplary cause in South Los Angeles. 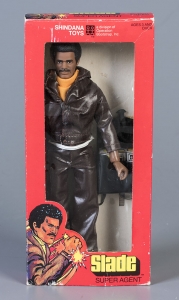 Over the subsequent years, Shindana produced a line of 32 black dolls and several games that never wavered from Operation Bootstrap’s principles. Cuddly Li’l Souls, a soft cloth doll with “natural hair” wore clothing imprinted with phrases such as “peace,” “right-on,” “I’m proud to say it loud,” and “learn, baby, learn,” a play on the “Burn, baby, burn” chant heard during the Watts Riots. Shindana released Career Girl Wanda to inspire young girls “to become what you wish.” Career Girl Wanda had different career aspirations and each iteration came paired with career-related accessories and a folder with career information. For example, Wanda Singer-Performer came with a microphone and Wanda Sky Diver had a parachute, helmet, and sky diving boots. Shindana’s Super Agent Slade doll did not carry weapons, but came accessorized with other crime-solving gadgets.

Shindana Toys proved the economic powerhouse of Operation Bootstrap and its profitability furthered the cooperative’s goals. The company commissioned local entrepreneurs, such as designer Doris Conner and her daughters, to further “black identity expansion and manufacturing.” The Conner family created, designed, and manufactured many of the doll clothes. Doris Conner later formed her own small business in South Los Angeles. Many in the community referred to her as mama and respected her contributions to the African Marketplace and Cultural Faire. Conner attributed her fascination with and success in fashion to her time with Shindana.

Operation Bootstrap’s Louis Smith believed that the “only plan is the commitment.” Shindana manufactured dolls and games until 1983, but the confidence and self-worth projected by Shindana remained relevant in the neighborhood and in the larger community. The Strong is proud to have a representative collection of Shindana dolls and Black History Month makes a perfect time to celebrate their history and importance as part of the diversity of play.