I grew up in a small town with a population of roughly 5,000. It may not look it now, but it was once booming with activity and businesses. A basket factory and a canning factory ranked among the major employers. Then the train quit making stops in town. Without convenient access to supplies, factories slowly closed and the population dwindled. But what became of the train station and the hotel attached to it? That is a key part of my childhood.

Somewhere down the line the train station came into my family’s possession. It was then converted to a home and family-owned pub. It had a “Cheers” sort of vibe, with regular customers and where everyone knew your name. It may seem strange and slightly inappropriate to say that I “grew up” in a bar, but it was all I knew. The jukebox was my lullaby and my leisure activity of choice was playing pool. 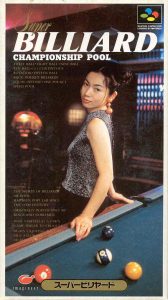 It wasn’t until I started research for this blog that I realized the history behind billiards goes back centuries. Billiards first evolved as a lawn game similar to croquet in the 15th century. Early records of its inception were mostly noted by nobles and royalty. The game eventually moved indoors and onto a wooden table. The wooden cue stick was introduced in the late 1600s. By the 1800s, the sport’s popularity expanded to include people of all different backgrounds and social classes.

Years later, the Industrial Revolution gave billiards a boost. With the streamlining and improvement of equipment, the beloved English game spread to other regions. The term “cue sport” can encompass many variations of billiards, including 4-ball, 15-ball, and snooker, just to name a few. The more commonly known 8-ball and 9-ball variations weren’t established until the early 1900s. 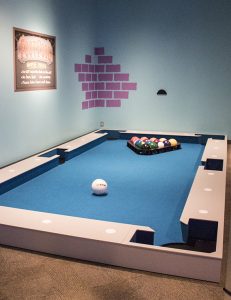 Popularity for the sport has grown in the last few decades with box-office hits such as The Hustler with Paul Newman in 1961 and The Color of Money with Tom Cruise and Paul Newman again in 1986. More recently, video game and online versions of billiards let you enjoy the basic concepts without leaving your home or even disconnecting from your electronic device. You don’t need to grow up in a bar to appreciate billiards and other cue sports. They’ve stood the test of time and even appears in a special supersized form in The Strong’s Have a Ball exhibit that continues on display through September 4, 2017. Check it out and see why billiards remains popular today and will continue to spark the interests of generations to come.