What Were They Thinking? Playthings to Ponder

Earlier this spring, the curators at The Strong gathered up items from the collections for a display we call “What Were They Thinking?” Although no one ever sets out to make a bad toy, the items exhibited included a number of toys, games, and dolls that make us wonder just what their designers and manufacturers thought about child safety, good taste, or the ways kids play. 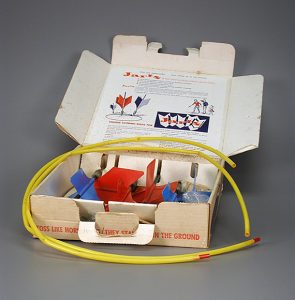 Take for instance, the 1970s opens in a new windowJarts, a popular lawn game like horseshoes involving oversized darts with sharp metal tips. The game required players to toss Jarts at a ring lying on the ground. What could possibly go wrong? In 1988 the Consumer Product Safety Commission prohibited the sale of Jarts in the United States after the game caused many injuries and three deaths.

Then there was Parker Brothers’ opens in a new windowRiviton construction set. Advertised as a “Toy That Makes Toys,” the set included a gun-like device designed to join parts together with rubber rivets. It worked great. Unfortunately, the riveting tool also functioned pretty much like a gun with rubber bullets. In 1978 Parker Brothers pulled nearly one million sets from toy stores after a child choked to death on a rivet. 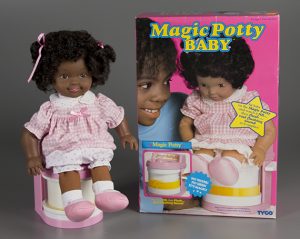 Some toy makers seem to have overlooked good taste in the toys they made and sold. Dolls relating to bodily functions make us scratch our heads. Perhaps Tyco’s Magic Potty Baby, a drink-and-wet doll with its own potty chair successfully introduced toilet training to toddlers. But is the yellow liquid that appeared when the doll sat in the chair the best way to teach the process? And what do you make of the mechanism that prompted a flushing sound and caused the yellow liquid to disappear?

A couple of toys seemed too outrageous to display. Consider the opens in a new windowJunior Dynamite Blaster, a play set with a detonator that pumped air into a blaster assembly topped with play rocks or other material that (hopefully) remained harmless in flight. 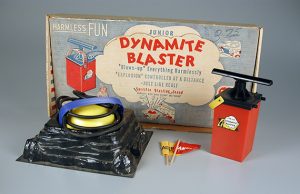 The Kilgore Mfg. Company suggested suitable materials in addition to the Styrofoam “rocks” it supplied: empty cereal boxes, empty cigarette packs (!), clothespins, empty milk cartons, tape and thread spools, and plastic dishes and boxes. Advertising for the toy asserted “Blasting is fun!” More puzzling is another proclamation on the play set’s box: “Selected by Science and Mechanics Magazine as one of the Ten Best Toys of 1958.” 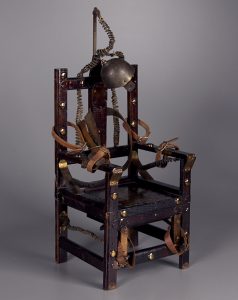 Finally, an object that has puzzled the collections team for many years: this doll-sized electric chair. Museum records contain no provenance or details of its origins, so we can only speculate about who made it and why. What concerns us more is thinking about who might have played with it. I prefer to think that it was never intended for child’s play; rather, that it was the home workshop project of a master carpenter with a wicked sense of humor. It makes you think; but, OMG, what was he thinking?