Toys for the Busy Executive 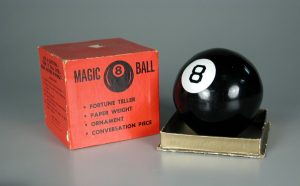 On the phone, after we settled in with the subject, Ms. Lasky posed her first question in the form of a riddle, “what’s the function of a non-functional object?” And with this one mischievous brainteaser she obliged me to think hard about the nature of toys and the reach and purpose of play. The complication? Play is often regarded as purposeless.

In fact, I replied, these contraptions, though pointless, are not useless; they are advertised to give the “busy executive” who fiddles with them a momentary mental vacation from molar-grinding deadlines. Sometimes, though, these toys aspire to offer more than a leisurely, distracting, tension-reducing interval. Call to mind the little desktop Zen-garden that comes complete with a little rake for leaving patient patterns in the sand around a mini bonsai. Engage with it, the toy seems to be saying, play with it, and a meditative state might ensue.

The fair question that logically follows is a little more pointed, “then what’s the use of a meditative state for a busy executive?”

The executive toy helps us answer this one, too. The Newton’s Cradle is plenty distracting as its steel balls clack away. But if you begin to wonder why, when you draw up one ball and release it, only one ball at the other end of the queue will spring free, you are drawn into the puzzle that kept Isaac Newton staring into space for hour after hour. Or if you play with the Rubik’s Cube, trying to line up recurring patterns of color, you might begin to wonder how this 3D mechanism can move in two planes. Both toys invite contemplation, an absorbing, distant attention. I

t’s this distant attention, a drifting, not-quite-focused state, that is often the precursor to, and sometimes the prerequisite for generating new ideas. A fish tank might lead you into mesmerization, taking your mind off-line; so might a lava lamp or a pulsing plasma globe. For problems that need solving and for tasks that ask for creativity in managing them, this poised state of mind, the fortunate result of play, can open the gate toward inspiration.

The Magic 8 Ball demonstrates this process almost to the point of parody. Ask it a question in just the right way, then turn it over and shake it, and an answer will come to you, swimming out of the inky darkness: “you may rely on it” the toy responds, or  “signs point to yes.” Positive replies outweigh negatives by two to one, liberating the questioner in the direction he or she was headed anyway. “The detachment that comes from watching [executive toys],” Ms. Lasky concludes, “is fertile soil for thought.”

I keep within reach one such executive toy in my office: a fancy yo-yo with a clutch mechanism that allows it to spin and spin at the end of its string. When a knotty sentence has me tied up and thwarted, I’ll “walk the dog” or send the toy spinning “around the world.” These tricks and a few others are impossible to perform if or while I’m thinking about something or anything else. A few throws usually will free me from entanglement.

In his memoir, the novelist Frank Conroy wrote of his own quest to master the yo-yo. “As I watched the trick unfold,” he wrote, “it was as if a ghost or a spirit was controlling the yo-yo’s movements, and that to be really good, one had simply to give up one’s desire to dominate the yo-yo and instead let the ghost take over.” To yo-yo, you need to let go.